It was a complete team effort for No. 5 Ohio State (11-1) as they had seven players score at least seven points in the Buckeyes’ 71-65 win over No. 6 Kentucky in the CBSSports Classic in Las Vegas, Nevada on Saturday.

Of those seven Wildcat three-pointers, five of them came from forward Nate Sestina, who entered this game with three made three-pointers on the season. He led all scorers with 17 on the night.

Young got the scoring started for Ohio State with a layup one minute into the action, and a pair of free throws a few minutes later made it 6-2 as the two teams felt each other out.

Sestina’s first three of the game came at the 13:22 mark of the first half and tied the game at 11-11. Point guard Ashton Hagans stole a bad pass from Luther Muhammad the next time down court and slammed it home to give Kentucky a 2-point lead.

Three minutes later, Sestina’s second three made it 19-15 Kentucky. That was quickly answered by a step-back three from DJ Carton. Carton then dropped in a layup on OSU’s next possession to give the Buckeyes a 22-21 lead with 8:30 to play.

The Ohio State lead never went beyond four points, and that lead was knocked down to one point at halftime (37-36) following Sestina’s third three of the half.

The second half opened slowly, with the Buckeyes outscoring the Wildcats 3-0 over the first three-plus minutes. Then, as he did all night long, Sestina put a dent in the lead once again with a three-pointer, making it 40-39 OSU with 16:34 to play.

A little over one minute later, Duane Washington dropped in a three of his own to make it a 4-point game again. Another Sestina three cut the lead to a point at 45-44 with 14:11 remaining.

Kentucky answered back quickly with a free throw from Hagans followed by a three-pointer by Tyrese Maxey to make it 51-48 with 9:54 to play. DJ Carton raced down the court for a layup following the Wildcats’ basket to give the Buckeyes a 5-point lead.

With the Buckeyes again up by four points, Kentucky guard Immanuel Quickley dropped in a three-pointer with 6:46 to play. Carton again answered that basket with a tremendous driving layup. He then picked up a steal on the other end of the court, which then led to a pull-up jumper from Luther Muhammad to make it 59-54 with 5:36 remaining. Maxey answered with a jumper on UK’s next possession to make it 59-56.

With just under four minutes to play, Muhammad hit a three-pointer to build the lead up to six points. Kaleb Wesson picked up his fifth foul on the ensuing possession, allowing Maxey to hit one of two free throws to make it 62-57 with 3:25 to play.

Ohio State had a couple of opportunities to begin icing things, but CJ Walker missed a pair of free throws and Muhammad traveled on another possession. Kentucky was unable to take advantage of the Buckeyes’ mistakes, however.

Following another Wildcat turnover, the Buckeyes finally began putting an end to things as Carton dropped a 10-foot nail into the Kentucky coffin, making it 64-57 with 1:10 to play. CJ Walker pounded the final hammer home with a three-pointer at the end of the shot clock to make it 67-59 with 28 seconds to play.

The Buckeyes will have a week off before next taking the court against West Virginia on Sunday, December 29 in Cleveland for a 12:00 pm tip. 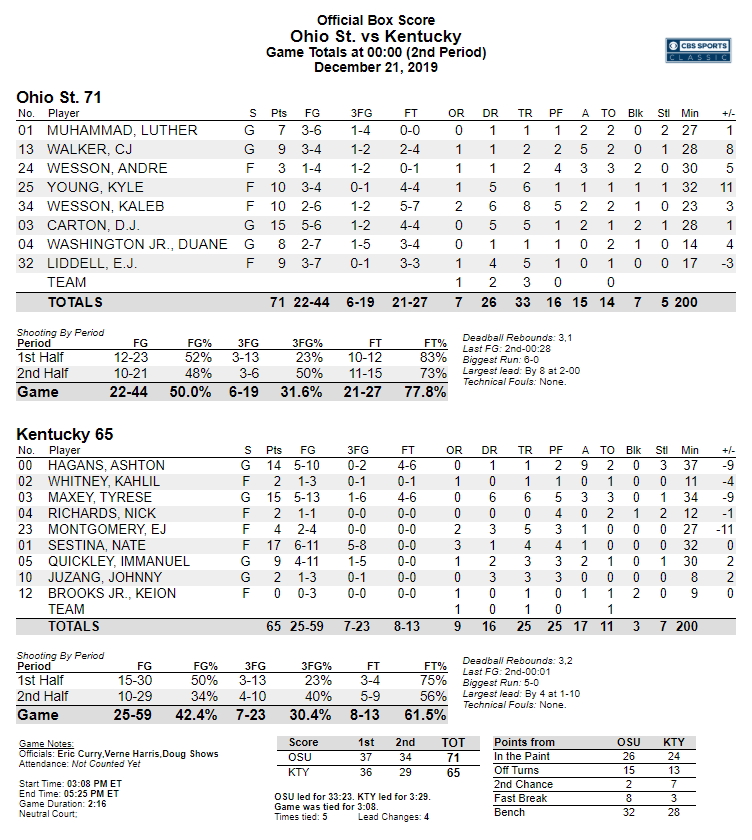