COLUMBUS — Led by 18 points and 10 rebounds from junior Kaleb Wesson, the No. 5 Buckeyes (10-1) started slow, but finished emphatically, defeating Southeast Missouri State 80-48, outscoring the Redhawks (3-8) by a whopping 45-22 in the second half.

Ohio State shot 30-of-51 from the field (.588) and finished with 23 assists. Andre Wesson added 14 points, while Kyle Young and DJ Carton each scored 10 points.

The first half of this game featured 13 Ohio State turnovers and 14 Buckeye field goals made, if that gives you any indication of what the first 20 minutes was like. The second 20 minutes featured Ohio State putting their offense and defense together extremely well, making a forgettable first half quite forgotten.

Sophomore guard Duane Washington was once again in street clothes due to a rib injury.

Ohio State opened the game by turning it over on three of their first four possessions. Despite the struggles, a three-pointer by Kaleb Wesson and a layup by EJ Liddell gave the Buckeyes a 7-2 lead just over three minutes into the game.

Over the next two-and-a-half minutes, however, Southeast Missouri State went on a 7-0 run, capped by a three-pointer from Oscar Kao to make it 9-7 Redhawks.

Wesson tied it up with a jumper, but then the Buckeyes went scoreless for another three-plus minutes. It wasn’t until CJ Walker dropped a three-pointer with 10:29 to play in the first half that the drought was snapped. That basket gave OSU a 12-11 lead.

One minute later, Southeast Missouri State’s Isaiah Gable and Ohio State’s Kyle Young traded threes. The three from Young started a 13-1 run for the Buckeyes, which built the OSU lead to 25-17. They eventually went to the half up 35-26.

The Redhawks scored just four points in the first nine minutes of the second half.

In that span of time, Kyle Young made a pair of layups, Luther Muhammad, Kaleb Wesson, and DJ Carton all hit threes — with Carton hitting two in back-to-back possessions.

Southeast Missouri State finally scored again at the 10:15 mark with a baseline jumper from Isaiah Gable to make it 59-32.

A ferocious fast-break dunk from DJ Carton on the left wing gave Ohio State their first 30-point lead at 62-32. Shortly thereafter, and in the span of one minute and 40 seconds, Andre Wesson drained a trio of three-pointers, making it 78-40 with 3:17 left in the game.

Ohio State pounded the Redhawks on the board, out-rebounding them 44-25. They held SE MO to just eight made field goals in each half.

The Buckeyes’ 23 assists were a season high, but so were their 21 turnovers. 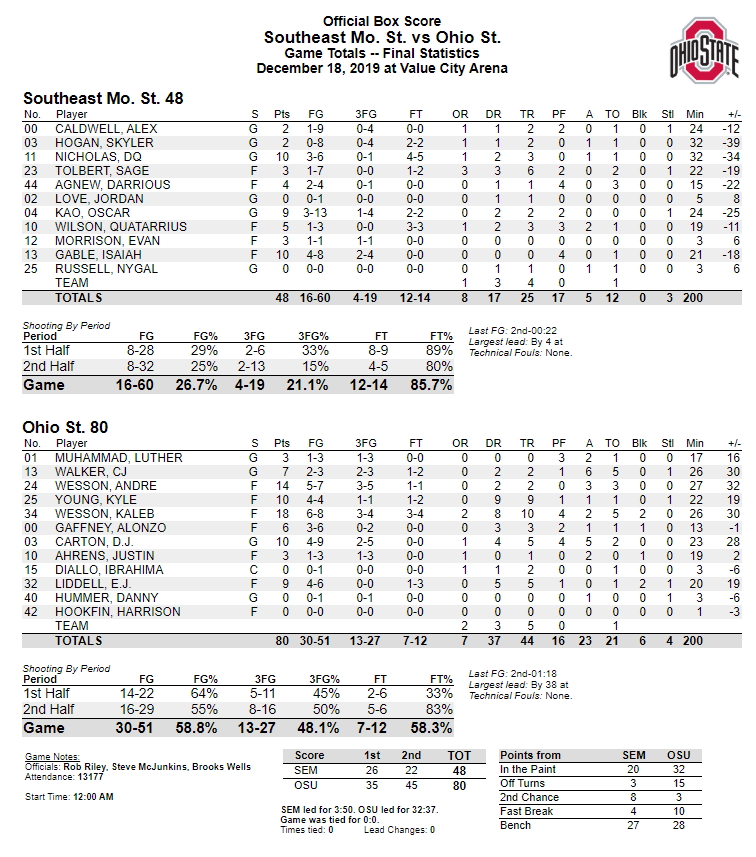