Ohio State freshman point guard DJ Carton is taking some time away from the basketball team to tend to personal matters. 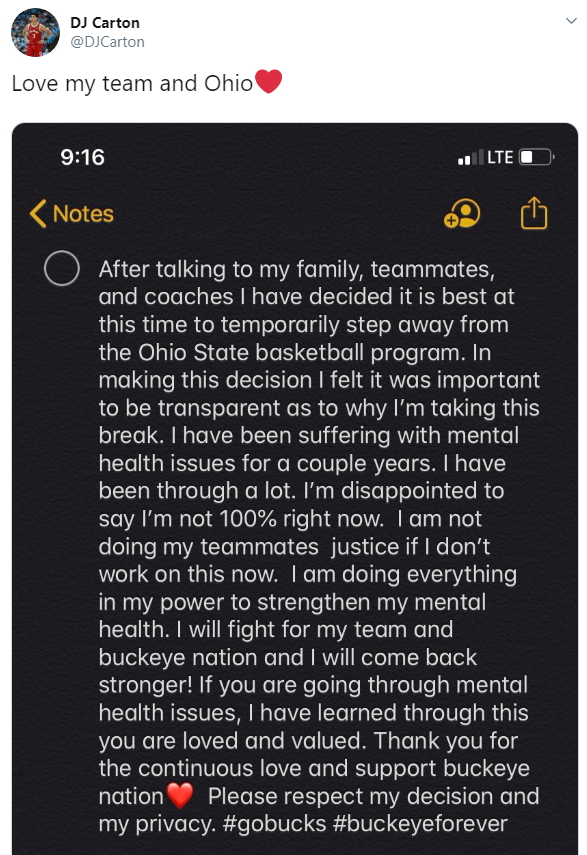 The length of his departure is not known, but he will miss Saturday’s game against Indiana.

“D.J. remains a valued member of our program and we will continue to love and support him. Please respect the family’s privacy in this matter,” Buckeye head coach Chris Holtmann said in a released statement.

Carton is third on the team in scoring this season, averaging 10.4 points per game. He is also grabbing 2.8 rebounds and dishing out 3.0 assists per game.

Carton is coming off of arguably his best game, having scored 17 points in 21 minutes of action in Sunday’s 71-59 win at Northwestern. He made six of his eight shot attempts, all four of his free throw attempts, and added four rebounds, three assists, one block, two steals, and just one turnover.

Since he went scoreless seven games ago in a 61-57 loss to Wisconsin, Carton is averaging 11.8 points per game over OSU’s last six contests.

Carton’s ability to push the ball has led to easy points at times this seasons. It has also been an area of frustration due to turnovers from the freshman. After a seven-turnover game at Indiana earlier in the month, however, he has turned the ball over just seven times in his last four games. His assist-to-turnover ratio in those four games was 2:1.

Without Carton on the court Saturday, point guard CJ Walker will likely have to play more minutes than he has been accustomed to playing. Walker is averaging 7.5 points and 3.1 assists per game in 26.8 minutes of action this season.

He should also be helped by the likes of Duane Washington and Andre Wesson when it comes to bringing the ball up the court.