It never takes long at the end of a college football season for fans to start looking ahead to the next one.

A lot will be different eight months from now. Standout players will be off to the NFL, while a new class of promising freshmen will arrive and start to make their mark. Coaching staffs will bring in new faces, and each team will play a new and different schedule of games.

That schedule can impact a team’s results almost as much as some of those other factors. One loaded with weak opposition could hurt your chances to make the College Football Playoff if you suffer a loss along the way.

On the other hand a murderer’s row of top-10 opponents will eventually catch up to even the deepest and best teams.

The 2019 Buckeyes ran into that at the end of the year. Back-to-back-to-back games against Penn State, Michigan, and Wisconsin had OSU sucking wind by the time the Big Ten Championship Game rolled around.

“We’re okay, physically, to be honest. But I think emotionally and mentally we need a little break here,” said OSU head coach Ryan Day less than 24 hours after that final game.

When the schedule is released, conspiracy theories are never far behind. Your team’s rival always seems to get a conveniently-timed week off right before they play you. Or maybe they get a weak opponent in the week before your big game while your team has to face a juggernaut.

So how do those Big Ten schedules get put together?

Every team schedules three non-conference games for itself. It also plays each of the other six teams in its division, plus one semi-permanent crossover game, and two other teams from the opposite division.

That one non-rotating crossover game is a result of the cross-divisional rivalry between the Hoosiers and Boilermakers.

“Indiana and Purdue are in separate divisions and need to play every year,” said Mike McComiskey, the Big Ten Associate Commissioner for Technology. “For the purpose of having a smooth rotation where every team could play each other team within a three year period, we came up with a kind of temporary permanent crossovers for the other 12 teams in the conference.”

Ohio State’s fixed crossover opponent from 2016 to 2021 is Nebraska. Penn State plays Iowa every year in that span, Michigan faces Wisconsin, and so on.

In 2022, those crossover games change. Then, OSU will face Wisconsin every year, while Penn State faces Illinois, and Michigan will take on Nebraska.

That rotating schedule means that every team will face every other conference opponent within a three-year span.

“Trying to see everybody within three years and trying to keep as much as possible home and away schedules, so that you’re not going home-home, away-away against the same opponents,” said McComiskey.

Once they figure out which teams each school will play, certain dates are locked in. Rivalry weekend on the Saturday after Thanksgiving is the big example.

Ohio State and Michigan play that week every season, and much of the Big Ten has a rival permanently in place for that weekend.

“Except for Michigan State, Penn State, Maryland, and Rutgers who can kind of face any amongst that group, everybody else has a set opponent in the last week of the season,” said McComiskey.

There are a handful of other criteria the league tries to avoid, like having a team play more than two road games in a row.

Outside of the Old Oaken Bucket game, they try not to have teams play cross-division in the final two weeks of the season to avoid immediate rematches in the Big Ten Championship Game. That’s not always possible. For example, Ohio State faced Illinois in the penultimate week of the regular season in 2017, and will again in 2020.

Michigan and Michigan State have also asked not to play the first weekend of the conference schedule to avoid having their rivalry game too close to the start of the season.

The Big Ten sends each season’s matchups, every program’s existing non-conference schedule, and those additional criteria to a consulting firm to generate the schedule. Outside of those few exceptions mentioned above, the order of those games is up to the computer.

“It’s purely random as it’s trying to put all the puzzle pieces together. There’s not a ‘this game must appear in this order,'” McComiskey said. “It kind of just goes through tries to schedule around any non-conference games that might be in there and just come up with what makes sense with those other criteria.

“You can’t play more than two in a row on the road. Or you wouldn’t have an away game, a bye, and then two more away games, so that people get to actually see their team at home every once in a while.”

Once the computer produces a workable schedule, it’s up to the league’s leadership to approve it.

“The first one that comes out that that fits the criteria, that’s what we take forward to our administrators’ council, which is made up of the athletic directors and senior members of the administration from each school,” said McComiskey.

That council can either approve the schedule, or kick it back and ask them to look at certain issues. One example of a schedule that got kicked back was a team whose week off came too early in the year.

“They had a bye in the fourth week of the season, and then they had nine straight conference games to end the year and did not want to do that. So that’s the type of thing as they pass along on their preferences, we try to incorporate that as much as possible,” McComiskey said.

But it’s not always possible to keep everyone happy.

“There’s always a butterfly effect to any change you make or add in,” he said. “You think it might be helpful and then it affects three other things that you really made the first schedule better than what you came up with.”

The Big Ten tries to keep weeks off as equitable as they can, but the computer determines those as well.

“We try to balance out bye weeks as possible so that as much as possible the both teams playing in a game either did or did not have the previous week,” said McComiskey. “It’s difficult to balance, and we can’t always do it. But when we can, we do.”

That doesn’t mean that everyone has to absolutely love it. Ohio State will visit Happy Valley in either September or October in each trip from 2016 to 2022. That makes it likely that most, if not all, of those games will be played in prime time in front of a hostile ‘White Out’ crowd. 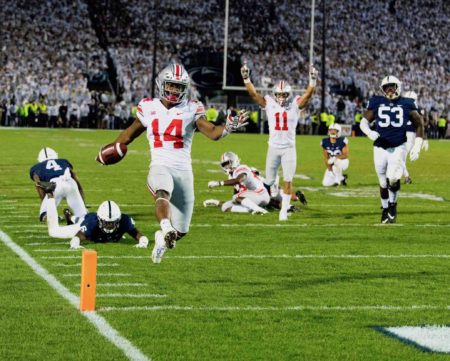 Penn State’s visits to Columbus, on the other hand, fall either in late October or November in 2017, 2019, 2021, 2023, and 2025. Under conference rules, night games in November must be approved by both teams, and thus almost never happen. The October 2017 matchup coincided with the World Series, which meant that FOX pushed it to an afternoon kick to keep its primetime slot free for baseball. The October 2023 game will likely fall during the World Series as well.

So did Penn State ask the Big Ten to make all of Ohio State’s visits happen when they could host a primetime White Out?

“It’s a coincidence in this case,” said McComiskey. “If a school were to make a request like that, that would go in front of our administrative council. We would make sure there was full transparency on the request and that there were no objections to any request like that.”

The kickoff time for this year’s OSU/PSU game will be determined by which TV network picks first that week. If FOX has the first selection, the World Series would likely push it to a daytime kickoff. If it’s ABC/ESPN, it would almost certainly be played under the lights.

The Big Ten already has its conference games scheduled out until 2025. They know, but haven’t announced, which teams every program will face until 2033. Schedules for at least some of the years 2026 and beyond will be presented to the leadership council in February.

If they’re approved, they could be announced shortly after that.