The Buckeyes were led by Andre Wesson, who scored a team-high 15 points and grabbed seven rebounds.

Indiana opened with three Rob Phinisee three-pointers in the first three minutes and 20 seconds to open up a 13-5 lead for the Hoosiers. That lead got cut to three points following a layup and a three-pointer from Andre Wesson.

Following a basket from IU center Joey Brunk, DJ Carton drained a three-pointer to make it 15-13 Indiana with 14:37 remaining in the first half.

The Hoosier lead grew to nine points at 25-16 following a Devonte Green layup. At that point, the Buckeyes finally woke up a bit and went on a 15-1 run over a six-minute stretch.

In those six-plus minutes, Kaleb Wesson hit a three, Andre Wesson added a layup, and both CJ Walker and Luther Muhammad dropped in three-pointers as well.

The Buckeyes went into the half with a 34-31 thanks to a three-pointer from Kaleb Wesson in the final minute.

The Hoosiers opened the second half on an 8-0 run. Back-to-back baskets from Brunk made it 39-34 Indiana with 16:13 to play in the game. Andre Wesson stopped the run with a three-pointer.

A dunk by DJ Liddell and a pair of free throws game OSU a 42-40 lead with 11:43. Devonte Green and DJ Carton then traded three-pointers before Indiana finally grabbed the lead for good.

Layups for Devonte Green and Rob Phinisee gave IU a 48-45 lead with 9:19 to play and the lead grew from there.

Three turnovers from Carton in the span of a few minutes allowed the Indiana lead to grow to 57-46. The Buckeyes could never get it below seven points after that.

Indiana stole the ball 11 times from the Buckeyes. 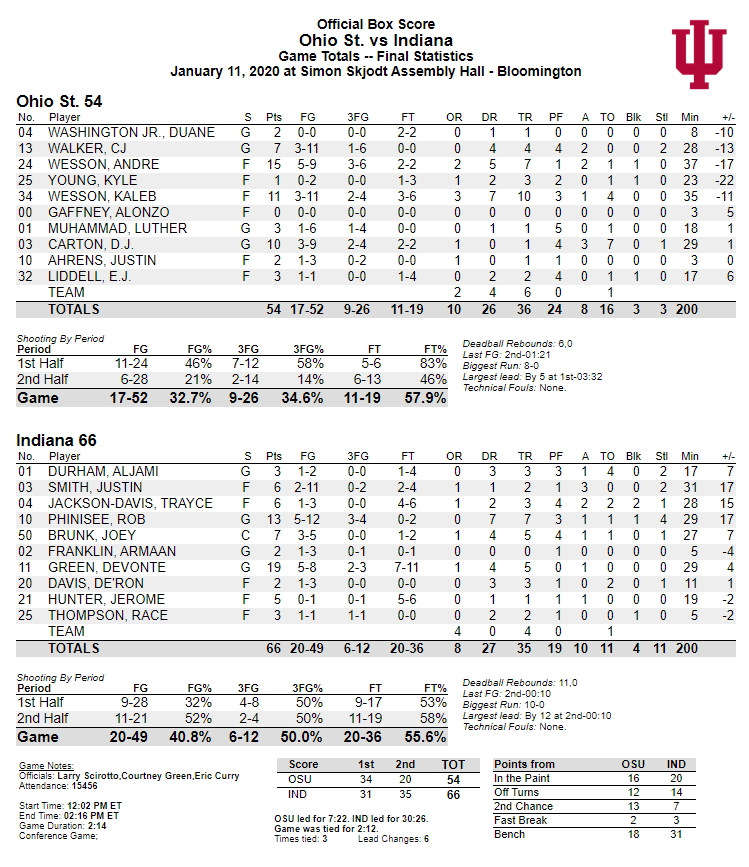