Kaleb Wesson got the scoring started with a three-pointer from well beyond the top of the key in the game’s first 90 seconds. That was quickly answered by a three from Purdue guard Jahaad Proctor, which was then countered by a three from Andre Wesson. Following a miss by Proctor two possessions later, Kaleb Wesson found Kyle Young out of a double team for a layup to make it 8-3 with 16:30 to play in the first half.

CJ Walker made it 10-3 by going coast-to-coast for a layup. Purdue’s Eric Hunter cut into the lead with a three of his own to make it 10-6 with just over 15 minutes to play. One minute later, Walker hit a three from the wing, making it 13-6. On the ensuing possession, Walker stole the ball on a pass from Boilermaker Sasha Stefanovic and went coast-to-coast for another layup to make it 15-6, with seven of those points coming from Walker.

The Buckeyes then went six-and-a-half minutes without a field goal, but when Duane Washington finally snapped the drought with a three from the top of the key, Ohio State still held a 21-12 lead. One minute later, Justin Ahrens added a three of his own to make it 24-12 with 6:52 to play, causing Purdue head coach Matt Painter to call a timeout in order to regroup.

Kaleb Wesson picked up his second foul at the 5:59 mark and spent the rest of the half on the bench. He had four turnovers at that point.

Following three-and-a-half minutes of scoreless basketball by both teams, Purdue finally got back on the board with layups in consecutive possessions, forcing Buckeye head coach Chris Holtmann to call a timeout with OSU leading 24-16 with 2:57 left in the half.

The Boilers added another layup before the Buckeyes finally got back on the board with a layup from Andre Wesson with 1:40 remaining. After a free throw by Wesson and a pair from Purdue’s Evan Boudreaux, Ohio State closed out the first-half scoring with a jumper from Washington to make it 29-20 at the half.

The Buckeyes turned the ball over nine times in the first half.

Kyle Young opened the second half with a driving layup while his man was sealed off by Kaleb Wesson. Two possessions later, Luther Muhammad made it 34-20 with a three from the right baseline. Painter called a timeout after the basket.

The Buckeyes extended the lead to 16 points a couple of times over the next two minutes, but a 5-0 run from Purdue made it 39-28 with 15:11 to play. Two minutes later, Kyle Young scored on a layup, which was followed by two free throws from Matt Haarms. A layup from Duane Washington with 12:23 remaining gave OSU the 43-30 lead.

A 6-0 Purdue run via two baskets from Proctor and another from Hunter cut the lead to nine points, but the Buckeyes answered with threes from Kaleb Wesson and Luther Muhammad to make it 51-36 with 8:46 to play. The Muhammad basket was Kaleb Wesson’s fourth assist.

Muhammad drilled another three a little over four minutes later, making it 59-43. Andre Wesson grabbed a defensive rebound on the ensuing possession and he launched the ball down the court to his brother, who lost the ball on his way up for a dunk attempt. Purdue turned that miss into a layup on the other end to make it 59-45 with under four to play.

From there, however, the Boilers would never get closer than 12 points, and the Buckeyes even opened it back up to 17 points before the final settled at 68-52. 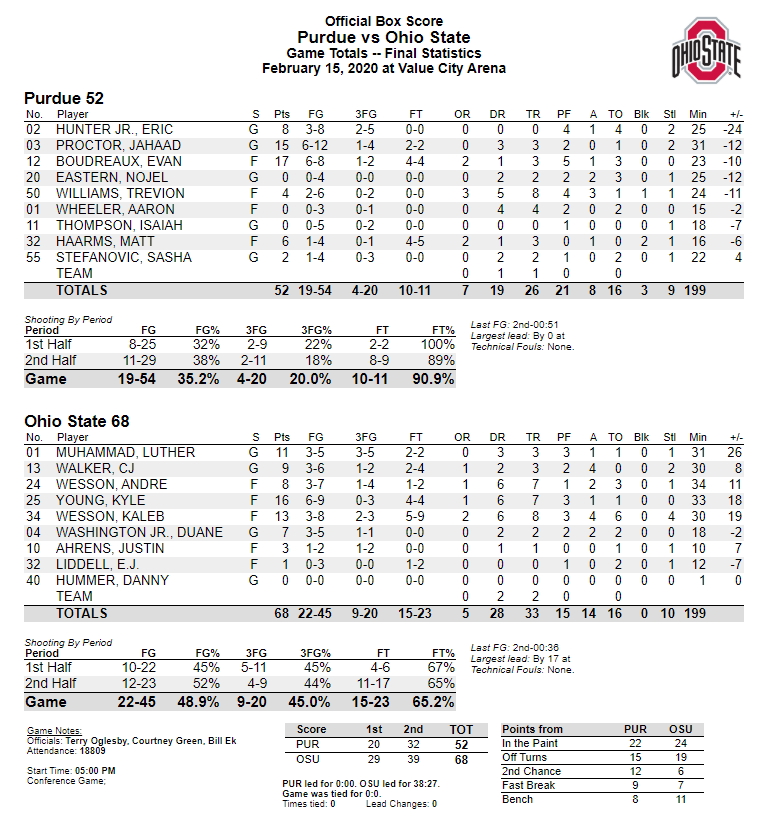