Badger guard Brevin Pritzl came off the bench to lead all scorers with 19 points on 5-of-6 shooting from three-point range. Wisconsin only had two scorers in double figures, which was twice the amount the Buckeyes had.

Tied at 15-15 with under eight minutes to play in the half — and the Buckeyes already with seven turnovers, Kaleb Wesson went to the bench with his second foul. Wesson had just two points and was 1-of-5 from the field at that point.

Wisconsin then took advantage of his absence — as well as their own hot shooting — and closed out the first half on a game-deciding 23-5 run.

Wisconsin outscored the Buckeyes 30-16 off the bench.

The game opened with missed shots and turnovers, but was tied 3-3 at the first media timeout thanks to three-pointers from Micah Potter and CJ Walker.

After scoring a pair of field goals to go up 7-3 on OSU, the Buckeyes responded with a 10-0 run via a Duane Washington jumper, Kyle Young layup, and two Andre Wesson three-pointers, the latter banking in off the glass at the end of the shot clock.

Brevin Pritzl answered with a three from the left corner, which was then followed by a turnaround jumper from Potter to make it 13-12 OSU with 9:55 to play in the half.

Soon after, Kaleb Wesson was sent to the bench with his second foul, which is when the entire game turned in favor of the Badgers. Wisconsin led 38-20 at the half.

The Buckeyes actually opened the second half on a 7-0 run, but it was merely a dent, and one that Wisconsin was able to easily take care of.

The Badgers’ lead grew to 23 points following a three from Pritzl with 10:43 remaining. It was his fifth three-pointer of the game. Ohio State never posed a threat following their opening run of the half.

Wisconsin assisted on 17 of their 24 field goals. 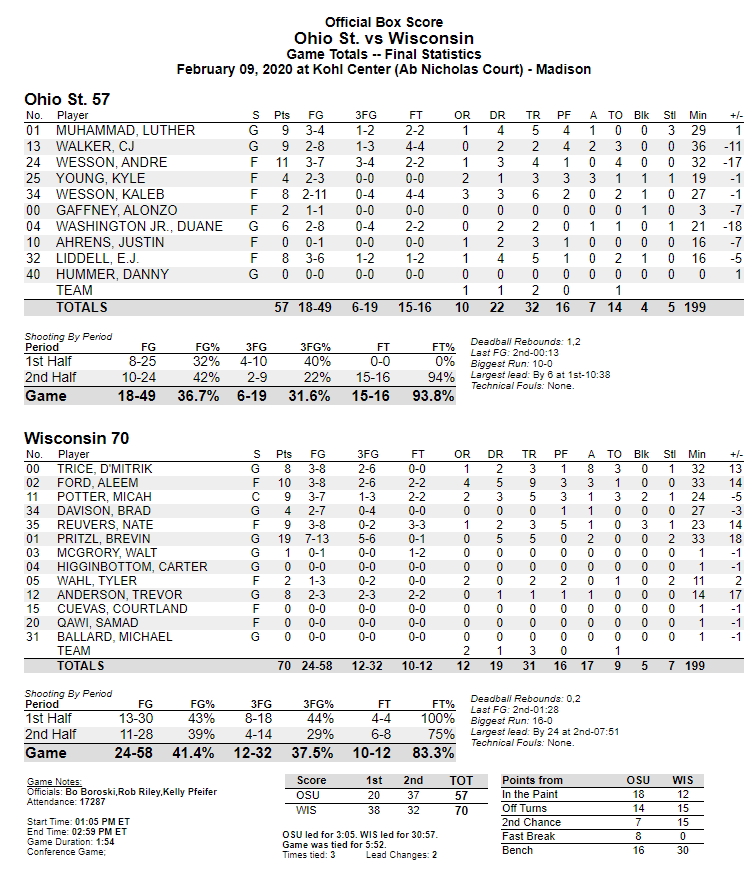