The Buckeyes got a career-high 17 points from freshman EJ Liddell, who proved to be the team’s most consistent offensive threat on the night. He also added eight rebounds.

Iowa led by 10 points before the first media timeout in this contest, which was the epitome of foreshadowing.

Iowa led 27-8 after the first 10 minutes because the Buckeyes could get no good looks and Iowa could get no bad.

Center Luka Garza was outscoring Ohio State 9-8 at that point.

The Buckeyes began clawing back, starting with threes from Andre Wesson and Luther Muhammad, as well as four bruise-inducing points from Kyle Young. The latter basket by Young made it 31-18 with 7:20 remaining in the first half.

Garza answered 15 seconds later with a jumper, which was countered by a hook shot from Kaleb Wesson.

The Buckeyes got an old-fashioned three-point play from CJ Walker on a layup and free throw to make it a 12-point game. Following some trading of turnovers, Kaleb Wesson made it 35-25 with a layup at the 5:03 mark.

Iowa had an answer throughout, however, as Joe Wieskamp’s layup gave the Hawkeyes a 12-point lead again. Liddell answered with a step-back jumper, which was then negated by a three-point play from Garza on a layup and foul by Kaleb Wesson.

Liddell added another jumper and Andre Wesson then made it a 9-point game with a driving layup. Garza again answered with a three-pointer, making it 43-31 with 1:46 remaining.

Liddell dropped in another jumper, which was followed by a Kyle Young put back to make it an 8-point game with 41 seconds to play. Iowa finished strong, however, as Wieskamp drained a three with 17 seconds to play, capping the first-half scoring and making it 46-35 at the half.

Kaleb Wesson opened the second half with a layup to get the game back down to nine points, but the Buckeyes wouldn’t get any closer than that until the final minute of the game. Iowa led it by 19 points with under seven minutes to play. Ohio State closed well, but the outcome was never in doubt.

The game was never tied, outside of the 0-0 start, and the Buckeyes never had a lead. 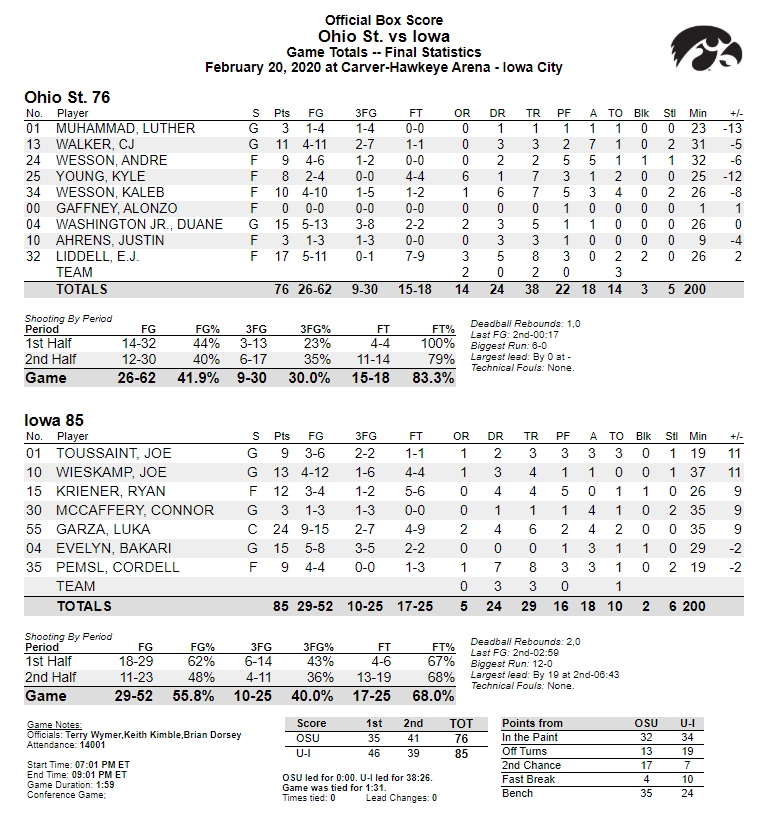