Ohio State opened the game by attempting seven three-point shots in the game’s first six minutes. In fact, their only shots in that stretch came from behind the three-point line. The Wesson Brothers each made one, and Luther Muhammad added two free throws to give the Buckeyes an 8-4 lead with 14:07 remaining in the first half.

The three-point barrage soon ended, but a three from Kaleb Wesson two minutes later made it 15-6. A pair of free throws by Rutgers’ Akwasi Yeboah and a layup by Jacob Young sandwiched a Duane Washington layup, cutting the 9-point lead to seven at 17-10 with 11:15 to play in the first half.

A three-pointer from Justin Ahrens gave the Buckeyes their first double-digit lead of the game at 23-12 with 9:52 remaining. A pair of driving layups by Duane Washington and Andre Wesson a few minutes later made it 31-16.

Rutgers’ guard Paul Mulcahy dropped in a three for the Scarlet Knights to cut OSU’s lead to 12 at 33-21 with 3:57 to play in the first half. Two minutes later, Mulcahy hit another three, which was followed by a layup from Jacob Young to make it 39-30 with one minute remaining. Young led all scorers with 17 points on the night.

Undaunted, the Buckeyes closed out the half with threes from Justin Ahrens and Andre Wesson to lead it 45-30 at the half.

Ohio State made 7-of-17 threes in the first half and 8-of-12 from two-point range. Andre Wesson had 12 points and seven rebounds at halftime.

The Buckeyes opened up an 18-point lead early in the second half thanks to a three from Luther Muhammad and then an elbow jumper from CJ Walker. A driving layup from Duane Washington and a fastbreak toss to EJ Liddell for a layup made it 55-35 Buckeyes with 12:48 to play.

Rutgers fought it back down to 15 points at 55-40, but it was Muhammad again from three to put the Buckeyes back up by 18 with just over 10 minutes remaining in the game.

The Scarlet Knights then worked it down to 14, but Kaleb Wesson answered with a three to make it 61-44 with 7:36 to play. The three was his third make in as many attempts.

Rutgers again went to work on the Ohio State lead, this time making it count by going on a 12-4 run to cut the deficit to 65-56 with 2:49 remaining. The Scarlet Knights’ most recent basket was a three from Jacob Young, which followed a much-needed Kaleb Wesson basket in the post.

Following a pair of free throws from Kyle Young, Rutgers got a layup from their own Young, which was then compounded by an OSU turnover and three from Ron Harper, Jr., cutting the lead to 67-61 at the 2:09 mark.

Jacob Young was then fouled shooting a three-pointer with 37.5 seconds to play. He missed the first attempt but made the next two, making it 67-63 Buckeyes. Kaleb Wesson was fouled on the inbound, which sent him to the free throw line for a one-and-one where he made both attempts to push the lead back up to 69-63 with 37.1 to play.

Ten seconds later, Rutgers guard Geo Baker nailed a three from the left wing to make it 69-66 with 27.1 seconds remaining. The Buckeyes were fortunate to get a pass inbounded, which resulted in Andre Wesson getting fouled and making one of his two free throws. Baker attempted another long three on the ensuing possession, but missed. CJ Walker grabbed the rebound and was fouled with 12.4 seconds remaining. He made both of his free throws to finally send Rutgers home.

Ohio State made 18-of-21 free throws on the night.

The Buckeyes moved to 15-5 on the season when they have fewer than 15 turnovers. They finished with 11. 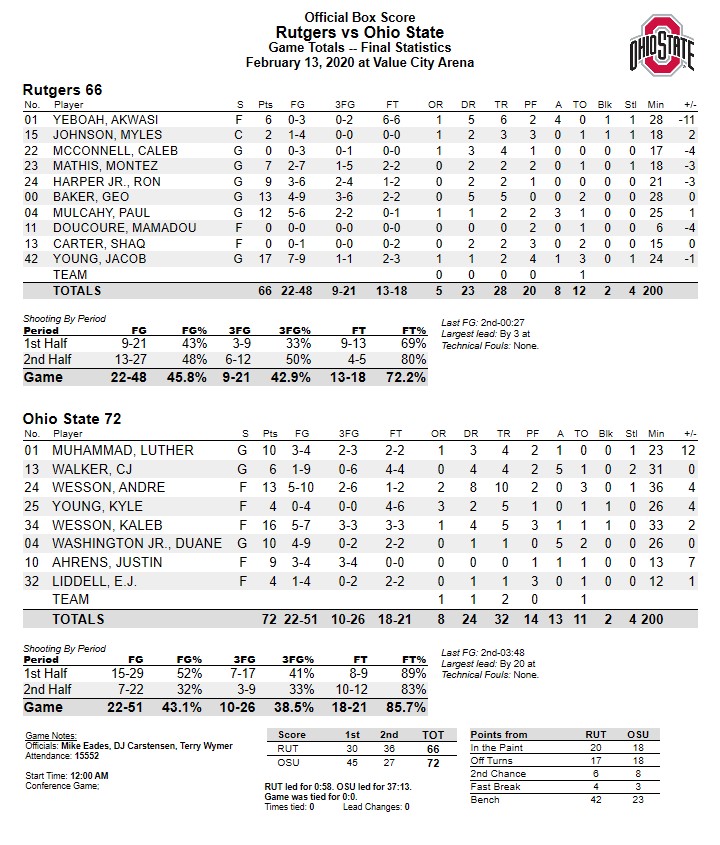