Thanks to some timely free throw shooting — as well as a bizarre flagrant foul from Michigan’s Zavier Simpson in the game’s final minute — Ohio State (15-7, 5-6) went into Ann Arbor and came away with a much-needed 61-58 win over the Michigan Wolverines (13-9, 4-7).

Kaleb Wesson led all scorers with 23 points on 9-of-14 shooting and 3-of-6 from three-point range. He also posted 12 rebounds and three assists.

Duane Washington chipped in 17 points and Kyle Young added in a dozen of his own. Luther Muhammad, Andre Wesson, and CJ Walker combined to shoot 0-of-13 from the field.

The Buckeyes held Michigan to 20-of-60 (.333) shooting from the field and 10-of-31 (.323) from three-point range. They weren’t much better inside the paint, as they missed a number of shots close to the basket.

It may not have been the prettiest game, but it was back and forth throughout. There were 19 lead changes for the game and nine different times it was tied.

Kaleb Wesson drilled a three for the first tie of the game at 5-5 just before the first media timeout. Wesson then added a pair of fadeaway jumpers a minute or two later to make it 9-5 as Michigan missed field goal attempt after field goal attempt, starting the game 2-of-13 from the field.

Wolverine point guard Zavier Simpson finally brought an end to UM’s drought with a layup after a botched switch by Duane Washington and Kyle Young.

Ohio State responded with a 7-0 run via a Washington layup and a putback and three-pointer from Kaleb Wesson to build OSU’s lead to 16-7 with 8:52 remaining in the first half.

Two free throws by Franz Wagner and a layup by David Dejulius got Michigan within two, but Kaleb Wesson responded with his third three-pointer of the half to get it back up to 21-16. Brandon Johns countered with a three of his own to make it 21-19 at the 5:43 mark.

The lead was briefly traded as Wagner dropped in a three-pointer, but that was negated by a three from Justin Ahrens to get the 2-point lead back. The Buckeyes added to it with a strong post move from EJ Liddell, making it 26-22 with 2:16 to play.

Following a pair of free throws by Austin Davis and a field goal answer from Washington, Eli Brooks nailed a three to cut OSU’s lead to 28-27 at the end of the first half.

The Wolverines only hit 4-of-16 from three-point territory in the first half, but outrebounded the Buckeyes 21-14.

Wagner and Washington traded threes to open the second half, and following a Washington layup, Dejulius tied the game at 33-33 with a three. Jon Teske hit a jumper from the right side to give Michigan the 2-point lead with 14:39 to play.

After a miss from EJ Liddell, Kaleb Wesson grabbed the offensive rebound and put it back in while getting fouled. He made the free throw to give OSU the 36-35 lead. That lead lasted for nearly a minute until Zavier Simpson hit a three-pointer. Liddell tied it up at 38-38 with a power move to the basket at the 12:28 mark.

Ohio State grabbed the lead back with a Kyle Young layup, and then held UM scoreless on their next possession. The Buckeyes couldn’t capitalize, however, as Luther Muhammad turned it over in the paint, which led to another Simpson three-pointer, making it 41-40.

Twenty seconds after that basket, Kaleb Wesson dropped in a layup to give OSU the 1-point lead, but that was erased by a free throw by Teske. Washington answered with a driving layup. He was fouled on the shot, but missed the free throw — his third miss in as many attempts on the night at that point.

Another layup by Young gave the Buckeyes a 46-42 lead, but UM responded with a three and a layup from Simpson to recapture the lead at 47-46 with 6:28 to play. The Wolverines went to a zone defense on their ensuing possession, confusing the Buckeye offense and forcing a timeout.

With Ohio State trailing 53-51 with under three minutes to play, Kaleb Wesson drove for the tying basket and was fouled. He made the ensuing free throw to give the Buckeyes a 54-53 lead with 2:21 remaining. Exactly one minute later, Eli Brooks drained a three to make it a 2-point lead for Michigan.

Washington then answered that three with one of his own from the top of the key, making it 57-56 Ohio State with 54 seconds remaining.

With under 40 seconds to play, Simpson drove to the basket and was fouled by Young. Young came away from the play with a massive hole in his jersey. The officials went to replay and found that Simpson pulled Young down to the ground, so they tacked on a Flagrant-1 foul on Simpson.

Simpson made his two free throws to regain the lead with 33 seconds remaining, then Young made his two get give OSU the 59-58 lead. The Buckeyes then got the ball. Michigan fouled CJ Walker and he made both free throws with 17 seconds to play. The points were his first of the night.

Michigan missed a three-pointer with their last possession as Ohio State attempted to foul, but none was called. 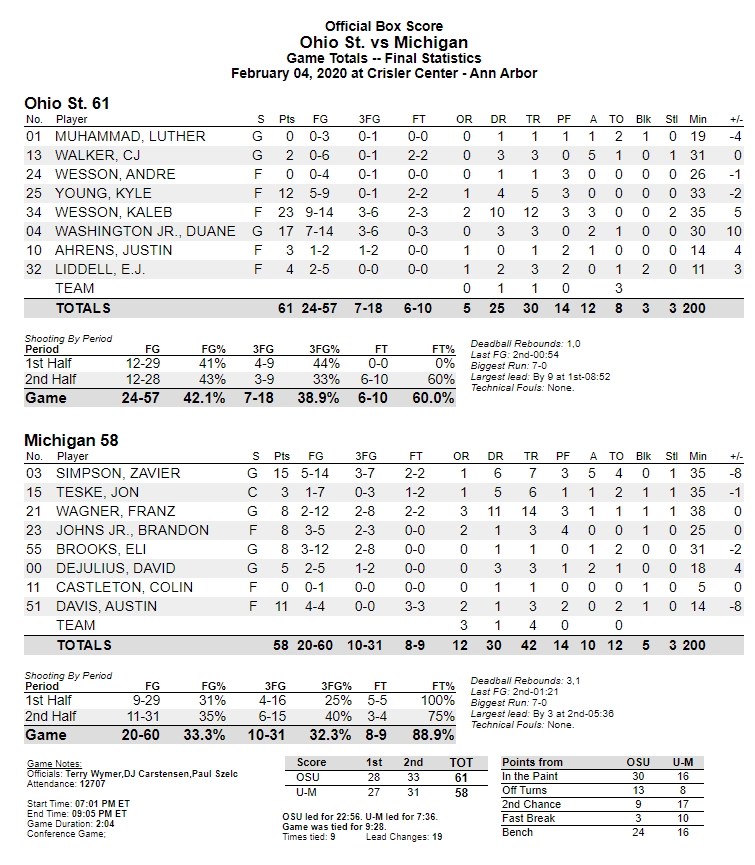