We are all saddened and affected by the cancellation of the NCAA men’s basketball tournament this week. March Madness is as much a part of our society as hot dogs and Bruce Willis movies, possibly even more.

The office pools, the school pools, the pool pools. We look forward to it every year because this was the year we were gonna shove it in Gary from HR’s stupid face! But alas, Gary will have to wait a year for his comeuppance. We will, however, have his boss tell him that he can’t parade his trophy around for winning last year’s pool anymore because last year is over. And don’t give us any of this “defending champion” mess. The trophy has been vacated this year and should at least be placed over by the copier or maybe in the kitchen by the coffee maker. At least once we all get back to work, that is.

But anyway, in an effort to give some kind of bracketability to our fellow Americans — specifically the Buckeye Americans, we have come up with “Smarch Madness.” This is our 68-team bracket of Ohio State traditions, bars, foods, moments, experiences, and memories.

For instance, the four No. 1 seeds in this bracket are the Out-R-Inn, the Varsity Club, Script Ohio, and the First Warm Spring Day on the Oval.

And don’t sleep on that 2-seed line, featuring Senior Crawl, Porch Drinkin’, Fall Sweatshirt Weather, and Leaving the Last Final of the Quarter.

Any one of those eight could come through it all — or maybe some lower seeds could make a Cinderella run, which is where you come in.

This is where you let your Ohio State fandom and experiences shine through. What meant the most to you? What do you still hold close to your heart? You decide whose beer specials reign supreme.

Smarch Madness tips off today with four play-in games. They will be decided by Twitter poll, as will every matchup in this bracket.

No, you don’t have to be in Dayton to vote on these four games.

Each day we will play around on Twitter by playing a round on Twitter. All matchups will be decided by polls voted on by you. Those polls will be posted by theozonedotnet’s Twitter account.

The First Round Matchups tip off on Sunday, followed by the round of 32 on Monday, the Sweet 16 on Tuesday, Elite Eight on Wednesday, the Final Four on Thursday, and then the Championship Game on Friday.

You can see the full bracket in its entirety below, and to help you along we have also included a Selection Show as Tom Orr and Tony Gerdeman recorded a podcast discussing the brackets and some of the more interesting matchups.

If you are not on Twitter, don’t worry, you can still take part. Like everyone else, we are inviting you to fill out a bracket in our bracket contest.

We have a handy-dandy Excel spreadsheet right here that you can fill out and if anybody sends in a perfect bracket, you’ll win some prizes. Could the prize be a billion dollars? Legally, I can’t say.

You can fill out your bracket and either email it to tonygerdeman@gmail.com or take a screenshot and post it right here on our message board.

Only one entry per person, however, because we prefer self-respecting contestants. Entries must be received by noon on Sunday, March 15 to qualify.

Happy Smarch Madness to you all! 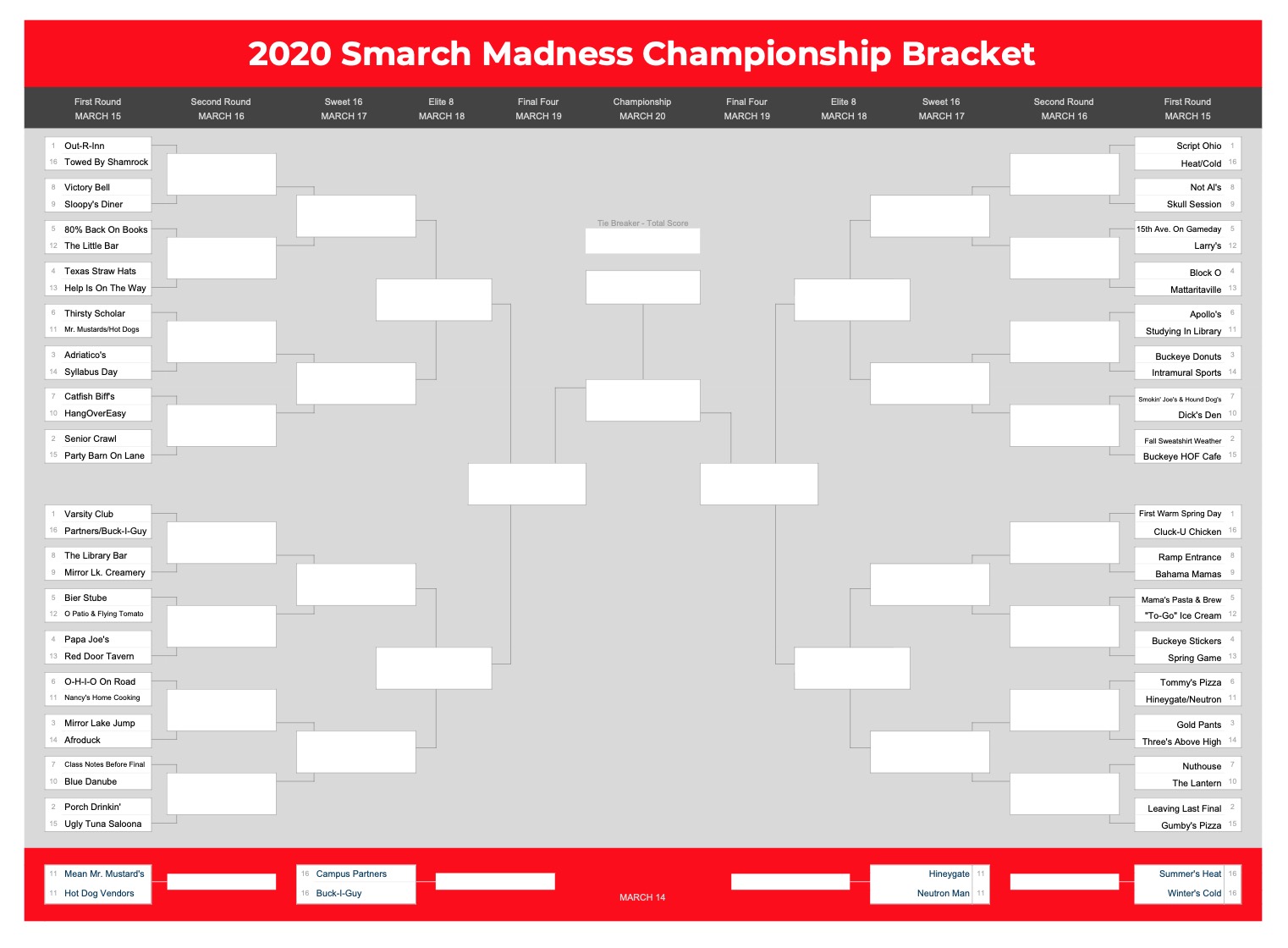