According to the latest Heisman odds released by FOXBet, Ohio State junior quarterback Justin Fields is now the betting favorite to win the 2020 Heisman Trophy.

After finishing third in last year’s balloting following a season where he threw for 3,273 yards with 41 touchdowns and just three interceptions, Fields is now +350 to win the award in 2020.

No other Buckeye is on the board, though former quarterback Tate Martell is the last player on the 54-man board at +20000. Newest Hurricanes quarterback D’Eriq King is fourth on the list at +900 for some reason.

A little over two months ago, Clemson junior quarterback Trevor Lawrence was the slight favorite, but he is now sitting second at +500.

Lawrence is not the only ACC quarterback in the top 10, as Notre Dame’s Ian Book comes in tied for eighth on the list at +2000. He shares the same odds as Alabama quarterback Mac Jones and longtime Longhorn quarterback Sam Ehlinger.

Quarterback Jamie Newman, who transferred from Wake Forest to Georgia, is third on the board at +700. Newman threw for 2,868 yards and 26 touchdowns last season. He also rushed for 574 yards and six touchdowns. He is expected to step in for Jake Fromm, who left early for the NFL.

Nebraska quarterback Adrian Martinez is the second Big Ten player on the list, coming in 11th at +3000. He is tied with the first non-quarterback — Crimson Tide running back Najee Harris.

Interestingly, 5-star Alabama freshman quarterback Bryce Young is at +3500, which is ahead of a sneaky pick in North Carolina sophomore quarterback Sam Howell. As a true freshman last season, Howell led the ACC in passing yards per game (280.1), touchdown passes (38), and threw fewer interceptions than Trevor Lawrence.

A third Alabama quarterback is also on the list, as Taulia Tagovailoa is +6000.

Quarterbacks from Minnesota, Penn State, Northwestern, and Wisconsin are also on the board.

No players from Michigan are listed. 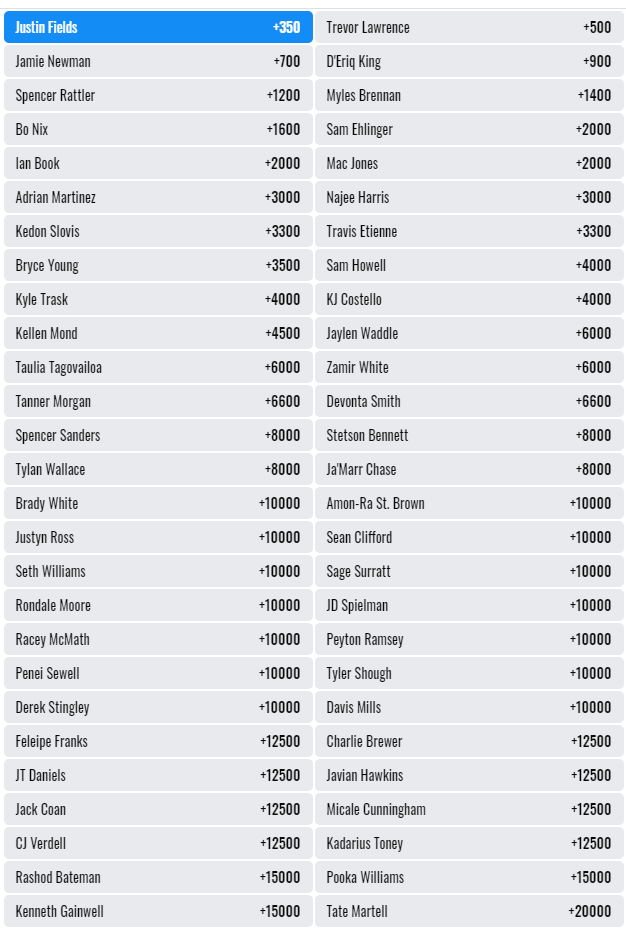