Ohio State left three contributors home last week when the Buckeyes traveled to Rutgers, and those same three players are absent from this week’s depth chart.

OSU hosts Maryland this week and it looks like they will again be without the services of defensive tackle Dre’Mont Jones, safety Erick Smith, and running back Antonio Williams.

Jones, who is the normal starter at defensive tackle, received a deep cut from a locker door a week ago. He is out this week, but Urban Meyer is hopeful he will be back next week when the Buckeyes hit the road for Nebraska.

Meyer listed Williams as questionable on Monday with what OSU termed a “medical issue” last Saturday.

The third notable Buckeye out this week is safety Erick Smith, who missed last week because he “wasn’t ready” to play. He is still not ready according to Meyer.

While Smith has been listed as a co-starter all season long with sophomore Jordan Fuller, it has been Fuller in the starting lineup each week and Smith in the game at the end when the outcome is no longer in doubt. Fuller is currently second on the team in tackles with 25 and has been named a Champion following wins against Indiana, UNLV, and Rutgers.

Without Jones, the Buckeyes will likely again turn to Jalyn Holmes. Holmes started last week for Ohio State, but Jashon Cornell and Haskell Garrett (who are the only two players listed at Jones’ old spot) will also see plenty of action.

Maryland’s offense likes to stretch the field east and west, so a defensive end like Holmes or Tyquan Lewis inside will help the defense cover more ground.

Williams’ absence comes at a fortunate time for the Buckeyes, who are now trying to figure out how to get more touches for Mike Weber, J.K. Dobbins, and Demario McCall. McCall led Ohio State with 103 yards rushing last week and this week in practice will be trying to earn snaps while the game is still in doubt.

Starting middle linebacker Chris Worley missed last week, but is probable this week according to Meyer. He is currently sharing an OR with Tuf Borland, just as he did last week. Borland has just six tackles over the past two games after notching 12 against Army three weeks ago. When Worley is back to 100%, expect him to step back into his starting spot.

It is going to be interesting to see how the reps at middle linebacker shake out when Worley does return. Baron Browning played a lot against Rutgers, as did Borland. The staff was planning on playing Borland against Army even with a healthy Worley. Do they continue trying to play three middle linebackers? Is that even smart and/or possible?

Expect Dante Booker and Malik Harrison to continue to rotate. The question now becomes whether or not somebody can push Jerome Baker in a similar fashion. 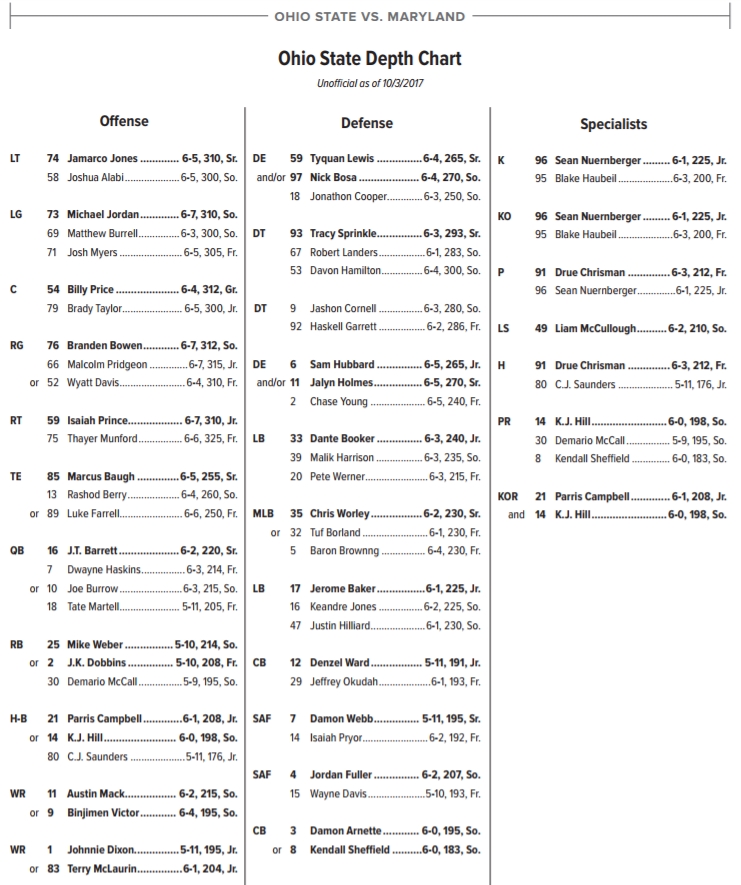