Now that the date for college football underclassmen to declare for the 2018 NFL Draft has come and gone, the world of mock drafts can really kick into gear.

Whether you like it or not, one of the most anticipated mock drafts every year comes from ESPN’s Mel Kiper Jr. On Thursday he released his initial first round mock draft, and it features three Ohio State Buckeyes.

The first OSU player off the board is cornerback Denzel Ward at No. 9 to the San Francisco 49ers. Ward is the top cornerback in the draft per Kiper (and others). If Ward does go ninth overall, he would be the highest-drafted Buckeye corner since Shawn Springs went third overall in 1997.

Ward is poised to become the 11th OSU cornerback selected in the first round since Springs was selected, and the fifth in five years.

The second Buckeye off of Kiper’s board is defensive end Sam Hubbard at No. 20 to the Detroit Lions. He is the third defensive end to be selected in this mock draft.

If Hubbard does go to the Lions, he would be the fourth Buckeye to be selected in the first round by Detroit. He would be joining the likes of Taylor Decker in 2016, Daryl Sanders in 1963, and Hopalong Cassady in 1956.

The third and final Buckeye in Kiper’s first round is center Billy Price, who comes off the board at No. 24 to Carolina. He is one of only two interior linemen projected to be selected in the first round. Kiper has Notre Dame guard Quenton Nelson going seventh overall to Tampa Bay.

Kiper has Penn State running back Saquon Barkley projected as the first Big Ten player selected, going fourth overall to Cleveland. Kiper also has the Browns using the No. 1 overall pick on Wyoming quarterback Josh Allen, who has never finished better than fourth in passing efficiency in the Mountain West.

Two other Big Ten players land in Kiper’s initial mock draft, as Iowa cornerback Joshua Jackson is slated to the Arizona Cardinals at No. 15, and Michigan defensive tackle Maurice Hurst is listed at No. 22 to the Buffalo Bills.

Familiar opponent Sam Darnold is off the board at No. 5 to the Denver Broncos, who most recently drafted a quarterback in the first round way back in 2016 (Paxton Lynch, Memphis No. 26 overall). Another familiar foe — Oklahoma quarterback Baker Mayfield — is projected to Washington with the No. 13 overall selection.

You can see the entire first round below. 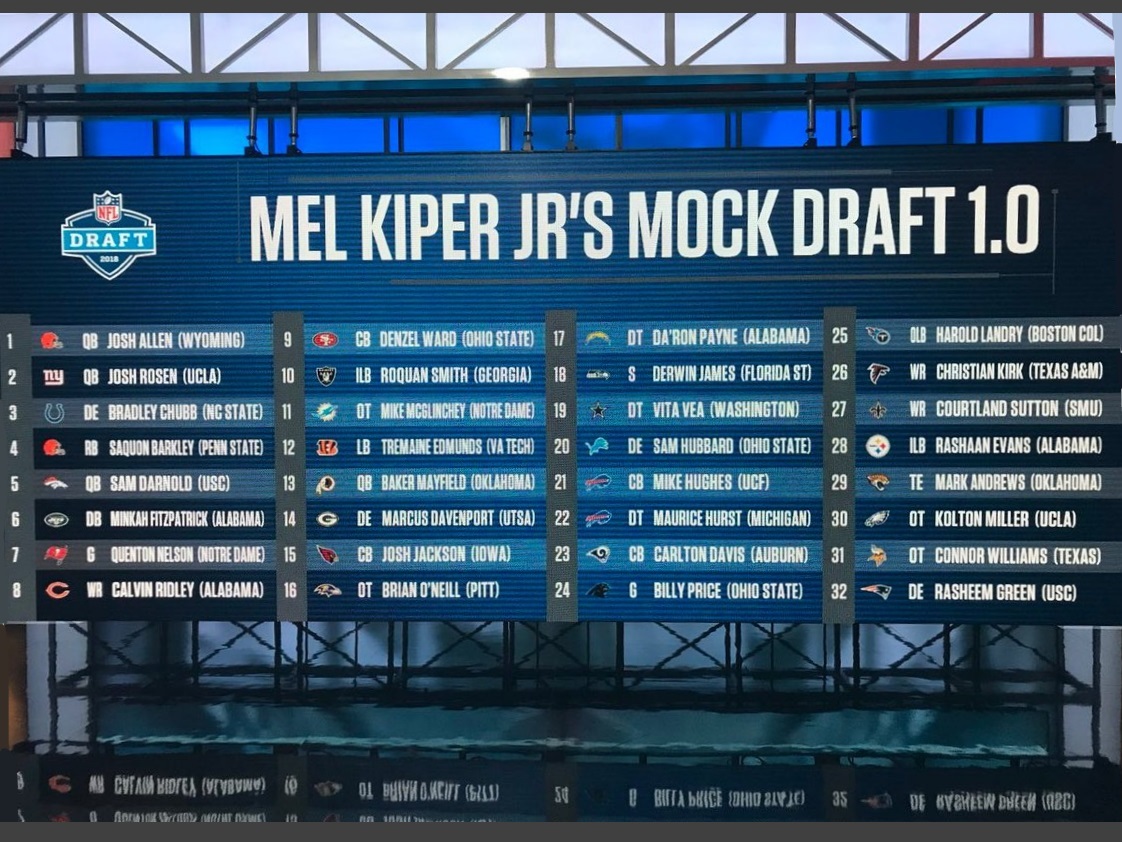