St. Louis (Trinity Catholic) wide receiver Marcus Washington has trimmed his list of schools that he is interested in to a nice, neat 10, and Ohio State has made the cut. Washington released his Top 10 via Twitter. 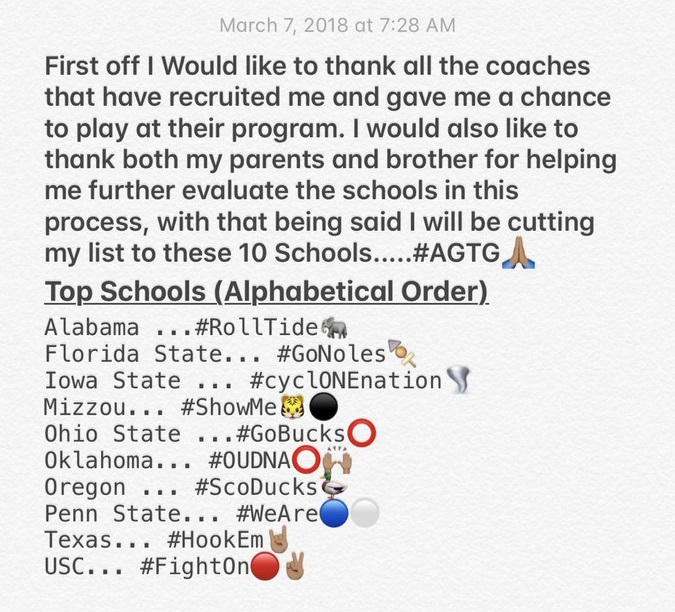 The Buckeyes signed two St. Louis receivers in the 2018 class in Kamryn Babb and Cameron Brown, both of whom played at Christian Brothers College.

ESPN actually has Washington ranked as the No. 3 receiver in the nation and the No. 11 player overall.

Washington caught 29 passes for 637 yards and 12 touchdowns last season. As a defensive back, he also picked up 32 tackles, three tackles for loss, and two interceptions. He has nearly 2,000 yards receiving in his career, averaging 19.5 yards per reception. He has caught 28 touchdown passes in his first three seasons of high school football.

Washington also plays basketball for Trinity Catholic, where he is currently averaging 7 points per game.

As a wide receiver, Washington displays the kind of deep speed that allowed him to average 22 yards per reception last season. He is also quick enough and agile enough to be used in screens and underneath passes as well. He is similar to incoming OSU freshman Cameron Brown, who is also from St. Louis and was mentioned above.

Ohio State has offered over two dozen wide receivers in the 2019 recruiting cycle and they seemingly have plenty more work to do in order to start landing some of them. They signed five receivers in the 2018 class, with three of them — Babb, Brown, and Chris Olave — all being similar in style to Washington.

With so many OSU receivers leaving after this coming season, expect a few receivers to be signed in the 2019 class as well in order to soften the blow.

You can see highlights of Marcus Washington below.