Having only seen the first 30 minutes of one early practice this fall camp and having not talked to any of the players or coaches, it is hard to form too many thoughts or conclusions about what is going on with the Ohio State football team at the moment.

Thanks to social media, however, we are getting some glimpses of what is happening behind the scenes, and there are some fleeting conclusions to be drawn.

Now, some would say it’s dangerous to draw conclusions based on glimpses, but desperate times call for desperate measures. Having gone frame by frame through OSU’s Twitter releases, there are items to be gleaned.

At the very least, Ohio State has shown us some things worth talking about, so let’s talk about them.

I was told at the outset of camp that the coaches were doing some things to keep practices and meetings light. We have seen some of that posted on Twitter by OSU in the form of impersonations, skits, rap battles, and a visit from Sinbad.

Rest assured, work is still getting done, but the staff doesn’t want the players feeling the weight of everything going on right now with Urban Meyer. They are trying to keep things as business-as-usual as possible, while also having fun during a time when fun isn’t always at the forefront.

When last you saw him, redshirt freshman quarterback Tate Martell was completing just 5-of-16 passes for 28 yards in the 2018 spring game.

He was also rushing for 69 yards and a touchdown on 10 attempts.

Of the clips Ohio State has posted during camp, none of them have shown Martell’s running ability. Instead, the clips of Martell have only shown him throwing the ball, and throwing it very well.

Yes, this isn’t unlike a high school player’s highlights in that you’re only going to see the best, but there have been clips of Buckeye quarterbacks throwing interceptions, but none of them to this point have been Martell.

Martell is staying in the pocket and sliding into open lanes pretty well it would appear.

Here is what he is doing in camp so far.

We have talked about the impressive potential of junior wide receiver Binjimen Victor since his arrival, and based on the highlights that Ohio State is providing, it would appear that Parris Campbell was right.

Victor is showing strong hands and deep speed, and just look at the height he gets against Kendall Sheffield here. 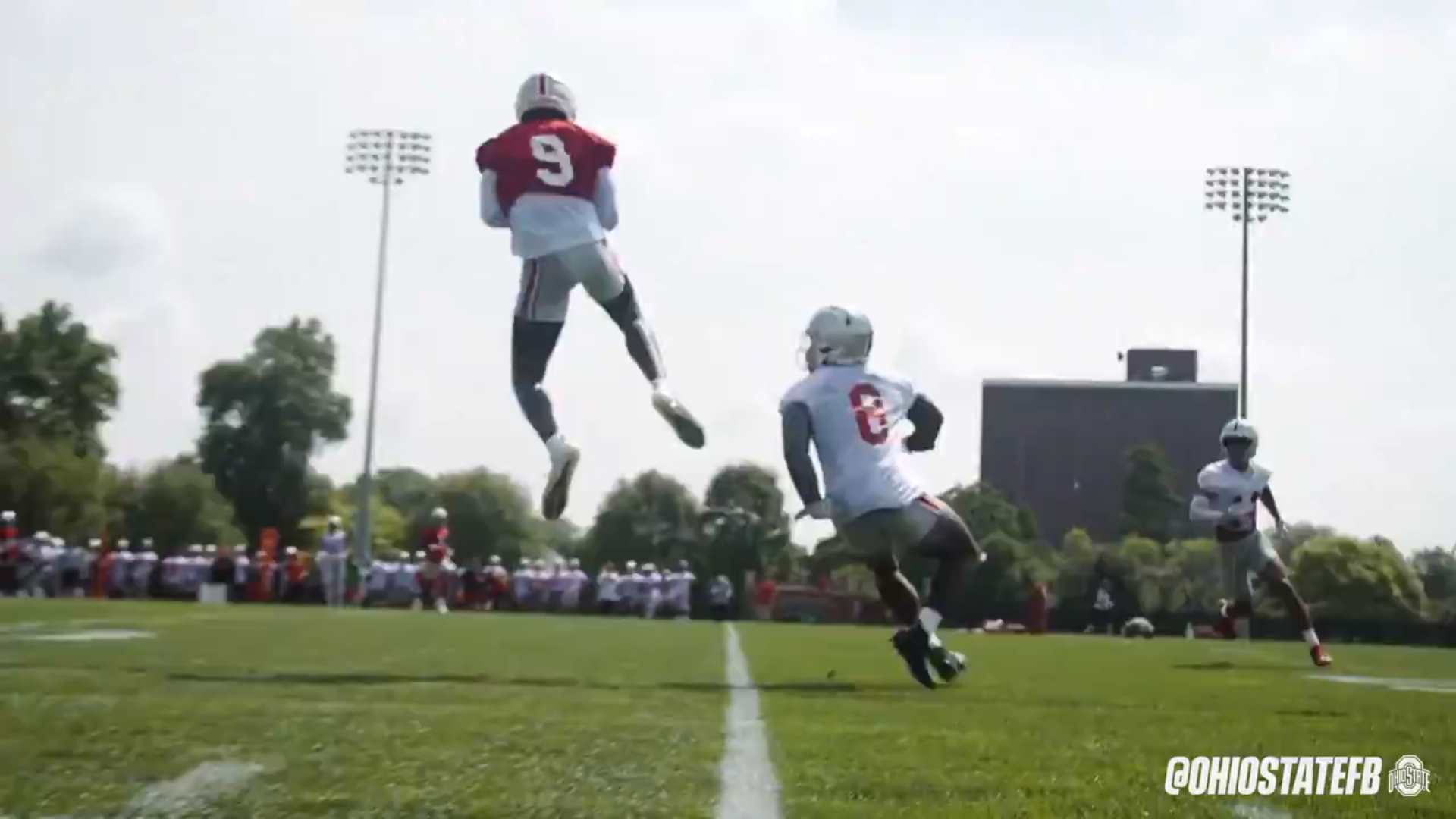 + After painstakingly going through Ohio State’s “films,” I did not see any clips of Michael Jordan at center. Even though many have talked about it, none of the clips clearly show him snapping the ball. In fact, of the highlights provided, Jordan is only ever at his customary left guard position. Fifth-year senior Brady Taylor is the first-team center in the clips, and redshirt freshman Josh Myers appears to be with the second team. It also appears that sophomore Thayer Munford is getting a lot of work this camp because he has been seen with both the first and second team. One highlight looked to feature a second-team offensive of Munford at left tackle, redshirt Gavin Cupp at left guard, Myers at center, redshirt freshman Wyatt Davis at right guard, and fourth-year junior Branden Bowen at right tackle.

+ The first-team offensive line appears to be the expected fivesome of Thayer Munford, Michael Jordan, Brady Taylor, Demetrius Knox, and Isaiah Prince. There is still almost three weeks of practice to go, however.

+ Sophomore safety Isaiah Pryor is with the ones at strong safety to this point. It will be interesting to see if he can keep the job and what happens if safeties coach Alex Grinch determines that sophomore Amir Riep needs to be on the field. As a former corner, Riep would seem to be better suited for free safety, which is where junior Jordan Fuller is supposed to be this year.

+ The young defensive backs are getting some great experience going against Ohio State’s veteran receivers. Freshman cornerbacks Tyreke Johnson and Sevyn Banks have been battling the likes of Terry McLaurin and Austin Mack and they are only going to get better for it.

+ There doesn’t appear to be any clips with the entire first-team linebackers on the field. Junior Keandre Jones is seen in a couple of clips with the second unit, which is also the case for sophomores Pete Werner and Baron Browning, as well as fifth-year senior Dante Booker. It is important to keep in mind, however, that there is constant rotation during practices and scrimmages. Junior Malik Harrison appears to be with the ones.

+ Freshman running back Brian Snead is going to play more than just four games this year. Losing his black stripe this early is an indicator that he plays with the requisite demeanor.