The quarterback has been a popular figure among Ohio State fans during his two seasons in Columbus, both for his personality and the potential of his game.

So what does being in the portal mean? Is Martell gone for good, or could he come back?

If he leaves, where could he end up next?

What would that mean for the Buckeyes’ quarterback depth?

All your questions answered below, but you’re going to have to wait on the Tathan one.

What Is The Transfer Portal?

The NCAA Transfer Portal is a system that schools, but not the general public, have access to.

Players who are interested in switching schools, either as a normal transfer or a grad transfer can submit their names to let other schools know that they are officially “on the market.”

This allows schools to contact that player without fear of tampering charges. They can also pay for him to take an official visit, similar to the recruiting process for high school recruits.

The downside for players is that if they enter their name in the Portal, their current school has the option of cutting off their scholarship at the end of the current semester. That’s true even if they ultimately decide they don’t want to transfer.

Could Martell End Up Staying At Ohio State?

He certainly could. It’s not yet totally clear if Martell plans to go through spring practice with Ohio State.

If so, he might feel like he’s in good shape to win the starting job ahead of Justin Fields and Matthew Baldwin for this fall, and decide to stay.

It’s pretty unlikely that OSU would cut off his scholarship at that point.

How Likely Is He To End Up Staying?

One is the offensive coordinator at Auburn, the other two are the new head coaches at West Virginia and Miami.

If you are hoping for Martell to return to Columbus this fall, those probably aren’t a great sign.

His high school teammate, safety Bubba Bolden, just transferred from USC to Miami this week. Don’t be surprised if that’s where he ends up.

Didn’t He Just Cut A Wrestling Promo About Being At OSU In 2019?

At Rose Bowl Media Day, Martell said he was “100 percent sure” he would be the Buckeyes’ 2019 starting quarterback.

When he was asked about the possibility that Justin Fields could transfer in, he dismissed the idea that it could impact him at all.

“Why would I leave for somebody who hasn’t put a single second into this program yet?” he said. “I’ve put two years of working my ass off into something that I’ve been praying for and dreaming of my whole life. To just run from somebody that hasn’t put a single second into workouts or anything like that and doesn’t know what the program is all about, there’s not a chance.”

Was it just bluster, hoping to chase Fields off?

Did something change between then and now?

We may not know the answer to those questions until Martell makes his final decision.

If Martell Leaves, What’s Next For OSU At Quarterback?

The depth chart for 2019 would be pretty thin at that point.

Walk-on Kory Curtis, who would presumably be the fourth-string quarterback if Martell leaves, is reportedly also in the transfer portal.

Fields still has to have his hardship waiver approved by the NCAA in order to play this fall. That sounds like it’s likely to happen, but until it’s official, he can’t play.

Baldwin has not played in a college game yet.

Chugunov played only a handful of snaps in mop-up duty in 2018.

If Fields somehow isn’t eligible to play, and Martell leaves, then things will be pretty dicey for the Buckeyes.

They would almost certainly try to land a grad transfer quarterback to give them a fourth scholarship signal-caller. 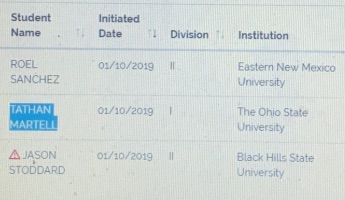 So if Martell’s presence in the transfer portal was the headline, his legal name was a close second.

After some serious acts of #Journalism (read: incredulity, followed by frantic Googling), it turns out the Las Vegas Review-Journal broke the Tathan news when Martell was still in high school.

Tafi Martell was six months pregnant and hadn’t decided on a name for her first child when she noticed “Tate” in the credits of a movie and suggested it to her husband.

But Al Martell, a former wrestler at Fresno State, wanted his future grappling champion to have a two-syllable first name.

“I told my wife, ‘When they announce a name, you need to exaggerate the first name. Tate’s too short,’” Al Martell said. “So, that’s how Tathan came about.”