The 11-seed Ohio State Buckeyes (19-14, 8-12) will play the 6-seed Iowa State Cyclones (23-11, 9-9) in the First Round of the 2019 NCAA Tournament. The Buckeyes enter this game following a 77-70 loss to Michigan State in the Big Ten Tournament quarterfinals. Iowa State, on the other hand, ran through the Big XII Tournament, coming out as champs. Their last time out, they defeated No. 17 Kansas 78-66 in the tournament championship game.

Who: Ohio State vs. Iowa State

Why: Because you can’t win six in a row without getting that first one.

+ The 2018-19 Buckeyes have nine games of NCAA experience and five starts entering the 2019 Tournament. C.J. Jackson, Andre Wesson, Kaleb Wesson and Musa Jallow have each played two games while Keyshawn Woods played in one while at Wake Forest. Jackson and Kaleb Wesson each have a pair of starts while Woods started his lone game. Jackson averages 19 points and four rebounds in his two games. 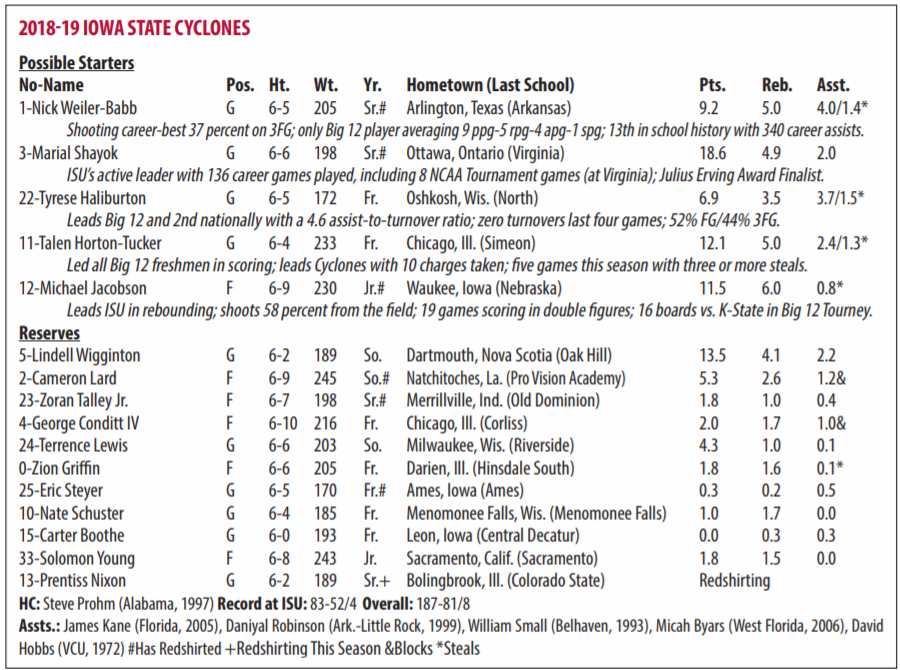 + Iowa State enters the tournament with a 23-11 record after winning the Big 12 Championship last weekend in Kansas City, Missouri. The
Cyclones defeated three NCAA Tournament qualifiers (Baylor, Kansas State, Kansas) to earn the league’s automatic bid for the fourth time in
the last six years. ISU, Kentucky and Villanova are the only schools in the nation’s top-6 league’s to win four conference tournament’s in the last six years. The Cyclones were 9-9 in Big 12 play during the regular season, finishing in fifth place.

+ Steve Prohm is in his fourth season at Iowa State and eighth overall as a head coach with a career mark of 187-81, ranking him among the
nation’s top-30 coaches (five years of experience) in career winning percentage. He is 83-52 at ISU, leading it to the postseason three times.
He has coached his teams to 20 wins in seven of eight seasons as a head coach and won two Big 12 Tournaments. Prohm has coached the Cyclones to 16 wins against the AP Top-25 (7 vs. AP Top-10) in his first four seasons in Ames, which leaves him behind only Johnny Orr (24) and Fred Hoiberg (23). ISU has 34 wins against the top-25 since 2013-14, the fourth-most nationally.

+ Iowa State is a No. 6 seed for the second time in school history. The only other time the Cyclones were a 6-seed was in 1997. ISU advanced to the Sweet 16 that season, defeating Illinois State and Cincinnati in Auburn Hills, Michigan before falling to UCLA in overtime in San Antonio. The highest seed ISU has ever earned is a No. 2 seed (2000 and 2001).