It wasn’t pretty, but it was most certainly a masterpiece.

Wesson led the Buckeyes with 21 points and 12 rebounds. Iowa State had very few answers for him on the night. Woods was right there as well, scoring 19 points via some clutch and commanding baskets down the stretch.

The game began on a pair of runs, one better than the next. Unfortunately for the Buckeyes, they had the first run.

Ohio State opened with an 11-2 lead, but Iowa State responded with a 15-2 run before head coach Chris Holtmann finally called a timeout to stop the onslaught.

The Cyclones’ 15 points came in about four-and-a-half-minutes and featured a trio of three-pointers, with two coming from Marial Shayok. The run was capped by a dunk from Tyrese Haliburton to make it 17-13 with 11:12 remaining in the first half.

The Cyclones went 15 consecutive possessions without a field goal, missing 10 in a row.

Ohio State was not able to take advantage of the drought, but part of that was because Kaleb Wesson was sent to the bench with his second foul at the 6:31 mark. The score was tied at 20-20, so the Buckeyes getting to the half with a 26-24 lead was about as positive as Holtmann could have hoped for.

Wesson scored six points in the first half and grabbed six rebounds in his 11 minutes of first-half action.

Shayok’s 13 first-half points led everybody and kept Iowa State in the game over the first 20 minutes.

The Buckeyes opened the second half with a baseline three from Musa Jallow, and then began feeding Kaleb Wesson. Wesson had consecutive baskets in the lane to maintain a 3-point lead at the first media timeout.

Woods dropped in a three 90 seconds later, then came down the court on OSU’s next possession and lobbed a perfect fast-break alleyoop to Jallow who threw it down for a 38-32 lead with 14:02 remaining.

Kaleb Wesson and Iowa State’s Lindell Wiggington traded points for a couple of minutes, and then a dunk by Andre Wesson made it a 49-42 game at the 10-minute mark.

Iowa State responded with a 6-0 run thanks to a pair of baskets by Sharok and a layup from Cameron Lard. They then grabbed their first lead of the second half following a Sharok jumper to make it 54-53 with 3:37 to play. Sharok led all scorers with 23 points, playing all 40 minutes.

The Cyclone momentum didn’t last long, however, as Woods took the ensuing possession into the paint for a basket to get the lead right back. Following a steal by Jallow, Woods drained a three from the baseline to put the Buckeyes up 58-54 with 2:44 remaining.

A layup from Lard made it a 2-point game, but Kaleb Wesson built it back up to four on a pair of free throws with 1:59 to play. Ohio State had two possessions to build on that lead, but couldn’t do it. Wiggington then hit a step-back three to make it 60-59 OSU with 21 seconds to play.

Woods was quickly fouled and he made both of his free throws. The Buckeyes then chose to foul and put Shayok on the line rather than allow Iowa State to shoot a three. Shayok missed the front end of the one-and-one. Kaleb Wesson grabbed the rebound and then he was fouled. He missed the front end of his own one-and-one, which allowed one final three-point attempt for ISU, but Nick Weiler-Babb’s shot fell empty as the Buckeyes finalized the 62-59 upset win.

Ohio State will next take the court against the 3-seed Houston Cougars (32-3) Sunday night at 8:10 pm.

Iowa State’s best defense against Kaleb Wesson on Friday night was hoping he simply wouldn’t get the ball, because when he did he was nearly unstoppable. He made 8-of-15 from the field and 5-of-6 free throws. It was a very physical game down low and Wesson took the brunt of that physicality, but never responded negatively.

+ The Buckeyes don’t win this game without Musa Jallow. Jallow played 29 points, scoring 11 points on 5-of-5 from the field. He grabbed six rebounds and dished out a pair of assists. His alley-oop dunk will live on in this year’s One Shining Moment video to be sure.

+ Chris Holtmann relied heavily on his veterans in this game, which was the correct call. Freshmen guards Luther Muhammad and Duane Washington played just 6 and 9 minutes, respectively, and they contributed three of OSU’s 11 turnovers. Washington was forcing the action, taking five shots in his time on the court. Holtmann gave them both an opportunity, but they did not have the proper level of calm to stay on the court. When you combine that with the way Woods and Jallow played, there were not a lot of minutes to be found.

+ CJ Jackson had a terribly off night, scoring just two points on 1-of-8 shooting. It wasn’t just that the shots weren’t falling — the shots weren’t even close. Despite that, he still grabbed six rebounds, dished out a team-high three assists, didn’t turn the ball over at all, and led the Buckeyes with a +12 plus/minus. 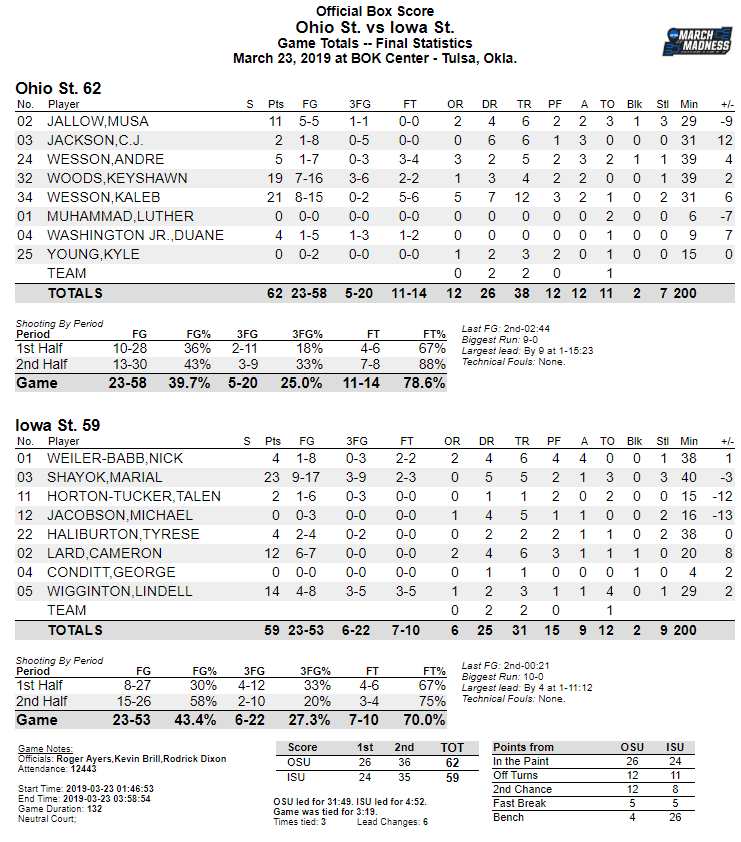