You all know the scene.

It seems like every year in the NFL or NBA Draft, there’s a player sitting back in the “green room” waiting to hear his name called.

Sometimes they’re back there a whole lot longer than they planned on being.

In 2005, Aaron Rodgers was talked about as a possible top five pick. Five hours into the first round and he finally went 24th overall to the Green Bay Packers.

Two years later, Brady Quinn was the potential No. 1 overall draft pick, but he sat back in the green room until the 22nd overall pick.

In 2013, Geno Smith accepted his invitation to the NFL Draft and didn’t even hear his name called in the first round.

The last guy in the green room is as much a part of the NFL Draft as the actual draft, and it’s never all that fun. 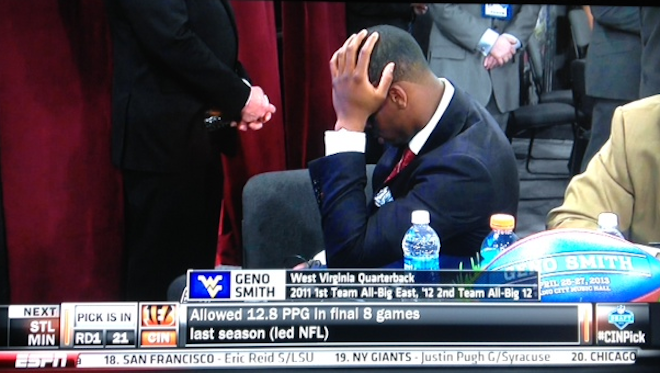 This year, Ohio State quarterback Dwayne Haskins will not be adding to that legacy.

But that’s not why he isn’t attending the NFL Draft, even though it has been portrayed that way by many in the media.

Reports of Haskins’ plummeting draft hopes have popped up over the last week — as they sometimes do when teams want players to fall into their laps — but that is not why Haskins is choosing to stay home.

He made his decision long ago — even before he was the starting quarterback for the Buckeyes.

“He never planned on going to the draft,” Ohio State head coach Ryan Day said on Wednesday. “I remember talking to him I think last year at this time. He said, ‘If I ever have that opportunity, I wouldn’t go to the draft.’ He just wanted to be with his family and he’s got a big family, a lot of supporters, so I think he wanted to do something back home. I think that’s something he always wanted to do.”

In terms of the falling draft stock, Day didn’t make too much of it, citing the interest that he has seen and the foot traffic in his office.

“We’ve had all 32 teams come through, sit in my office and ask questions about him,” he said. “They’ve had people come through, they’ve had quarterback coaches, they’ve had GMs, owners, presidents. So everybody’s coming through. There becomes a certain time in the draft where guys’ stock goes real high and they try and shoot holes in them and then right before the draft they start to rise back up again. So that’s kind of how that thing goes down.”

And since Day used to be in the NFL, he knows how the sausage is made.

Knowing Haskins as well, however, he has zero doubts about his quarterback’s ability to succeed in the NFL.