I have been reading and listening with great interest to your commentary on the evolution of the OSU defense this spring. While simplicity is the buzzword being tossed around by the coaching staff, I note that they are developing complex personnel packages, particularly involving safeties, linebackers and bullets.

If ever you run a mailbag article with reader submissions please consider the following question(s) my submission(s). Does the plan to have many personnel groupings have the fatal flaw of being highly vulnerable to up-tempo, no-huddle offenses? If offenses don’t give you a chance to substitute, doesn’t that whole concept fail? Is there in fact a “base” personnel grouping that can handle the up-tempo situation, or will this defense get abused when wrong personnel packages get trapped on the field by an uptempo offense? — J. Porentas

This is something that I have been wanting to write about, but it seems daunting to tackle because of all of the variables. Though when the boss sends in a reader mail request, I guess I have to stop putting it off and just get it done.

Rather than heading off into 16 different tangents, let’s take the questions one at a time and try to remain somewhat organized and focused.

Firstly, does the plan to have many defensive personnel groupings have the flaw of being vulnerable to up-tempo offenses?

Tom Orr and I talk about this a bit on tomorrow’s episode of the Buckeye Weekly podcast if you want some more conversation about this, but to answer the question, I don’t think it puts Ohio State in any disadvantage that every other team can’t also get caught in.

There is also talk of using four linebackers at times with a three-man front, and if they get stuck in that formation, they should be fine as well. Especially if one of those four linebackers is Brendon White. In fact, if White is on the field at Bullet in that situation, then they’d be perfectly suited for an up-tempo, anything goes offensive attack because White would give them another defensive back if needed.

Of course, for me, this is all contingent on Shaun Wade winning one of the starting safety spots. He is and will forever be a cornerback in his mind, and he definitely has that skill set, so he would allow for better coverage as one of three safeties (including White) should they all get caught on the field together against an up-tempo, pass-happy stretch of offense.

However, if he isn’t one of the starters at safety, then part of that reason why will be because the winner has shown very good man coverage skills.

This is where things start to get tangential, but we should explain the safeties this year.

The Buckeyes will be playing multiple looks at safety. Sometimes they’ll have one safety deep — that will be the free safety. The strong safety will be closer to the line and he will defend slot receivers quite often in base looks. There will be other times, however, when those two safeties will both be deep.

The question now is who will be where. Jordan Fuller is out this spring. Does he fit better in that free safety spot or the strong safety spot against slot receivers. He has done both well.

Last year when Shaun Wade was at safety with Fuller, it was Wade who was closer to the line and defending the slot. Would that pairing hold true again this season? Or if, say, Josh Proctor is deemed to be one of the two best safeties with Fuller, does Fuller move back towards the line of scrimmage and Proctor play the deep safety and showcase the athleticism that people have only heard about?

We don’t know yet and neither do Jeff Hafley and Matt Barnes.

What we do know, however, is that you should expect Shaun Wade to be the team’s nickel back, but that doesn’t preclude him from also starting at safety.

And to answer the original question of this whole ordeal, I don’t think the personnel groupings will put OSU in a vulnerable position because they will almost always have five defensive backs on the field (including Brendon White) in base situations. And in terms of that being vulnerable against the run, they wouldn’t implement it if they didn’t think it couldn’t stop the run. Stopping the run is the first goal of every defense, so they believe they can do it with the Bullet.

That being said, there will also be times when the Buckeyes play a Sam instead of a Bullet, and those situations will likely involve heavy running teams, i.e. Wisconsin.

The second part of the question was if there was a base personnel grouping that can handle the up-tempo attack and the answer is yes. The passing game and the up-tempo aspect of it are why the Buckeyes have gone to the Bullet.

Greg Mattison has been a part of this kind of defense at Michigan for years. The Bullet at Michigan was called the “Viper” and Jabrill Peppers played it for a couple of years, and now Khaleke Hudson is beginning his third year at the spot for the Wolverines.

Where Brendon White differs from Jabrill Peppers, however, is that White can also play safety and move freely from Bullet to Free.

And for me, it is this ability for White to move from linebacker to safety that makes this defense well suited for an up-tempo attack.

The Bullet will generally line up on the strong side of the field, meaning whichever side the tight end is on, or the side overloaded with three receivers. (And keep in mind, OSU will always be able to match up the numbers to start a drive or against an offense that isn’t running no huddle, so it’s not like they’ll ever see four receivers or three tight ends on the field and not be able match the numbers.)

Ohio State can essentially go from a base 4-3 look to a nickel look by simply switching Brendon White to safety and bringing Shaun Wade up to the line over the slot. 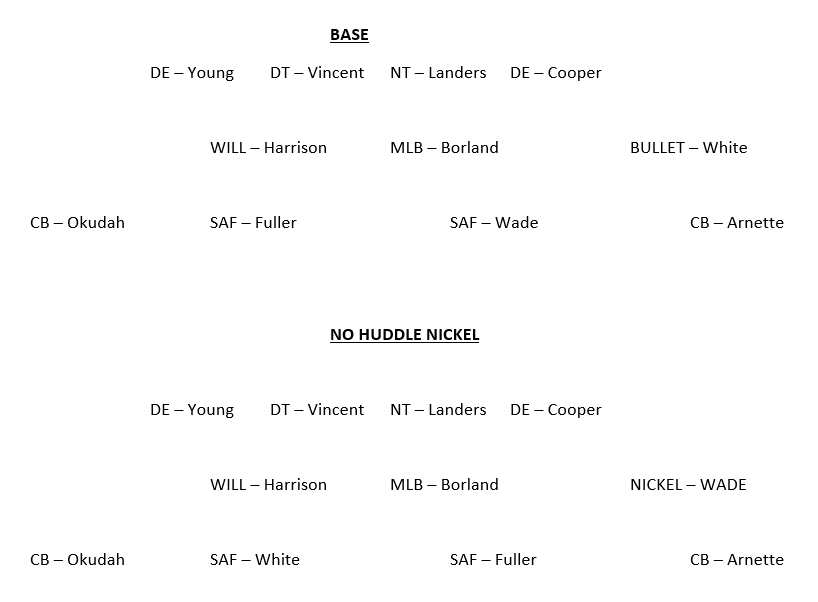 And if Wade isn’t the other starting safety, we already know that Fuller is a skilled defender who could slide down and cover that slot. Then, when the Buckeyes either sack the quarterback or break up the pass, Wade can come in at nickel if needed.

An up-tempo offense only works if positive yards are being gained, and there will be an entire Ohio State defense working hard to make sure that doesn’t happen. Any incompletion or stop in the backfield ends the no-huddle and frees the Buckeyes up to continue to compartmentalize in any direction they choose.

But I wouldn’t expect any of those compartments to be such that they could significantly hinder the Buckeyes on the next snap.

And if they do find those, that’s why they made timeouts. Feel free to use them. Having one less timeout is much better than giving up seven more points.