We said there would be some big games, and this one came out of nowhere. It was Thad Matta’s first year at Ohio State and this particular game was the Buckeyes’ regular season finale. Ohio State had a 7-8 record in conference play and came into this game on a 3-game losing streak. The Buckeyes had already suffered a 19-point loss to Illinois in Champaign earlier in the schedule. It ended up being No. 1 Illinois’ first loss of the season, dropping their record to 29-1 and 15-1 in B1G play. John Porentas had the story. — TG

The official box score says there was just one lead change in the OSU vs. No. 1 Illinois game, but it was probably the single-most significant lead change in Ohio State basketball in the last few years, and certainly in the Thad Matta era at Ohio State.

The Illini (29-1, 15-1 Big Ten) led all the way against the Buckeyes, leading by as much as 12 points in the second half. But a funny thing happened with just five seconds left in the game. OSU forward Matt Sylvester came around a screen, took a pass from Brandon Fuss-Cheatham, and buried a three-pointer to change the scoreboard from 64-62 Illinois to 65-64 Buckeyes.

The improbable shot capped an improbable Buckeye victory which ruined Illinois’ bid at an undefeated regular-season and put the Buckeyes back on the college basketball map.

Illinois got a shot off after Sylvester’s big three pointer, but Roger Powell’s three-point attempt was an air ball and the game ended with that 65-64 score remaining on the scoreboard as bedlam broke out in Value City Arena. The fans took the floor in celebration with the Buckeyes (19-11, 8-8) and finally, Buckeye basketball seemed to be back.

“I think saying this would be a big win would probably be the understatement of the world today,” said OSU head coach Thad Matta.

“Just to beat Illinois with them being number one, on senior day on our home court, there’s just no better feeling. I’m at a loss for words right now.”

Wins against number one teams do not usually come easily, and this game proved not to be an exception to that rule. But the combination of one of OSU’s best performances of the season coupled with an Illinois performance that was not quite Illinoisesque made for a memorable moment in the Value City Arena for the Buckeye faithful in attendance.

The Illini have made a living this season on fast breaks, getting run outs by forcing turnovers then beating the opposition down court for easy scores. Matta knew his team couldn’t suddenly get faster and beat the Illini down the court, so he took the approach of preventing those fast breaks by eliminating the turnovers. The Buckeyes turned the ball over eight times in the first half and were outscored 38-27. In the second half, however, OSU committed zero turnovers and outscored the Illini just enough, 38-26.

“They thrive on getting out on transition off people’s turnovers,” said Dials.

“I think our guards did a great job of being strong with the ball and making sure they didn’t get easy looks in transition. I think that was the turning point.”

“Coach told us at half time that if we take care of the ball and rebound, we would have a chance,” added senior guard Brandon Fuss-Cheatham. “That’s what we did I guess.”

Nothing was coming easy for the Illini, but they were still good enough to hold off the Buckeyes until the final minute of the game. Despite the Illinois strength, the Buckeyes hung in there for a chance to win.

“They were playing loosey-goosey. To their credit, they didn’t quit. I thought maybe a couple of times maybe we could break them. We just could never do it and they hung in there and made the big shot at the end. You’ve got to give them credit.”

The Illini led 64-58 with 3:24 remaining in the game, but did not score the rest of the way. OSU’s 7-0 run to victory started with a jumper by Terence Dials to cut the lead to 64-60. Following an Illinois turnover, Sylvester scored his 21st and 22nd point of the game on a layup.

Trailing 64-62, the Buckeyes needed a big defensive play, and got a huge one when Dials blocked an attempted layup by Roger Powell to put the ball back in OSU’s hands and keep the Buckeyes within two with 1:08 remaining.

“I just saw a man shooting and just tried to do anything to stop him from scoring,” said Dials. “I just happened to be in the right place at the right time to get a block.”

The last 1:08 was a microcosm of the whole game; nothing came easy for either team.

Sylvester missed a jumper with 50 seconds remaining, then Illinois’ Luther Head misfired on a three that would have put the Illini up five with 18 seconds remaining. Tony Stockman got the rebound, rushed the ball up the court and called timeout as he crossed midcourt. The Buckeyes went to the bench, huddled up, and plotted out the sequel to Hoosiers.

“I went into the huddle and I told the players ‘Gentlemen, we’re going for the win, and they were as excited as I’ve ever seen them,” said Matta.

“They executed the play as well as we could have. Matt told me as he left the huddle ‘Coach, I will make the shot,’ and he did.”

“It’s a play that we run a lot,” said Sylvester. “We have Tony (Stockman) as a decoy because that’s a great decoy. Tony’s a great shooter. I came around the screen and they were looking at him like they had no doubt he was getting the ball. Terence set a great screen, pinched in my man, and before they realized it wasn’t going to Tony, I had already basically let the ball go, and I made it.”

“I told coach if I got it, I was going to make it,” Sylvester confirmed.

Sylvester was confident as he left the huddle, but said he wasn’t quite so sure after he got the shot off. He was asked when he knew the shot was going in.

“Once I opened my eyes back up…,” Sylvester quipped, drawing a laugh.

“That ball didn’t feel great coming out of my hand, but God was on our side.”

The ball went in for that one lead change, and 5.1 seconds off the clock later, the celebration was on in Columbus.

“It feels like a dream, like I’m going to wake up all-of-a-sudden, and it’s all going to be over, but it feels good right now,” said Sylvester.

“We think Sylvester is one of the most improved kids in the league,” said Weber. “Watching film, obviously he played the game of his life tonight and hit a huge shot.”

“I think for the first time maybe all year really the pressure down the stretch, we were tentative, we weren’t aggressive,” Weber said. “They were the more aggressive team. They made the plays on offense and defense and they won. They’re an NCAA tournament (caliber) team I think, and when you’re playing on their court, they’re playing loosey-goosey, and they made plays.”

Sylvester led all scorers in the game with 25 points. Je’Kel Foster added 10 for the Buckeyes. Illinois was led by Dee Brown with 13 points, Roger Powell and Luther Head each tallied 12.

Illinois outrebounded OSU 37-31, including a 13-7 edge in offensive rebounds.

* Sylvester’s 25 points and game winning shot was like a dream come true for the junior forward, literally.

“I was in the gym with Brandon (Fuss-Cheatham) the other day and I said ‘Wouldn’t it be unbelievable to score 25 points and hit the game-winner against Illinois?’ We literally said those exact words. It feels so good I can hardly describe it,” said Sylvester of living out that dream.

* OSU Head Coach Thad Matta knew the importance of this game, and pulled out all the stops to get his team ready for the Illini.

“We had some new wrinkles in for this game that were very, very good for us today,” said Matta. “Usually you put wrinkles in and you never run them. We got six to eight points off them.”

Matta said that Xs and Os were not the only innovations he made for the game.

“I had our film guy put together an edit today and we showed them right before we left for the court of all the miracle upsets,” he said. “I think that was something that helped us a little bit, to see other teams do what we were trying to do.”

Matta also made sure his team knew the importance of the outcome.

“Coach told us in the locker room that it put Ohio State back on the map to where it needs to be,” said Dials. “We have a great young coach who is a great coach and had a big win today on CBS. I think it’s going to do wonders for the program.”

* Sylvester made the big play when called upon, but said after the game he was nearly out of gas when the buzzer went off.

“I was exhausted. I was completely exhausted,” he said.

Despite the fatigue, Sylvester wanted no part of coming out of the game in the second half.

“If he would have taken me out we might have had a fist-fight on the sideline,” laughed Sylvester.

* As is true after any upset, there were contrasting moods in the opposing locker rooms following the game. Bruce Weber, however, told his team not to hang their heads over the loss.

“I told them to celebrate what they had done,” he said. “Going undefeated was not one of our goals, it just kind of snuck in there. We didn’t get it done. Now we’ve learned from it. We move on and the next stretch is the most important of the year. That’s what people are going to remember.”

There were plenty of smiles on the guys wearing Scarlet and Gray, but the hero of the day, Matt Sylvester, brought some perspective to the win.

“After a big win like this it can go one of two ways. It can either energize a team and you keep going up or you get satisfied and complacent and it kind of goes down,” said Sylvester. “I think the people on the team and the spirit this team has, we’ll keep going up. I think this game is reflective of where the Ohio State program is going, I really do. I think Coach Matta and his coaching staff is doing an unbelievable job. I think the program is on the rise.”

“We were just tired of losing games in the last minute,” added senior guard Brandon Fuss-Cheatham. “I think guys came to the huddle saying ‘We are definitely going to get this done.’ Matt said ‘I’m going to hit this shot.’ Guys had so much confidence in what was going to go on that it was just awesome for us to come through like that.” 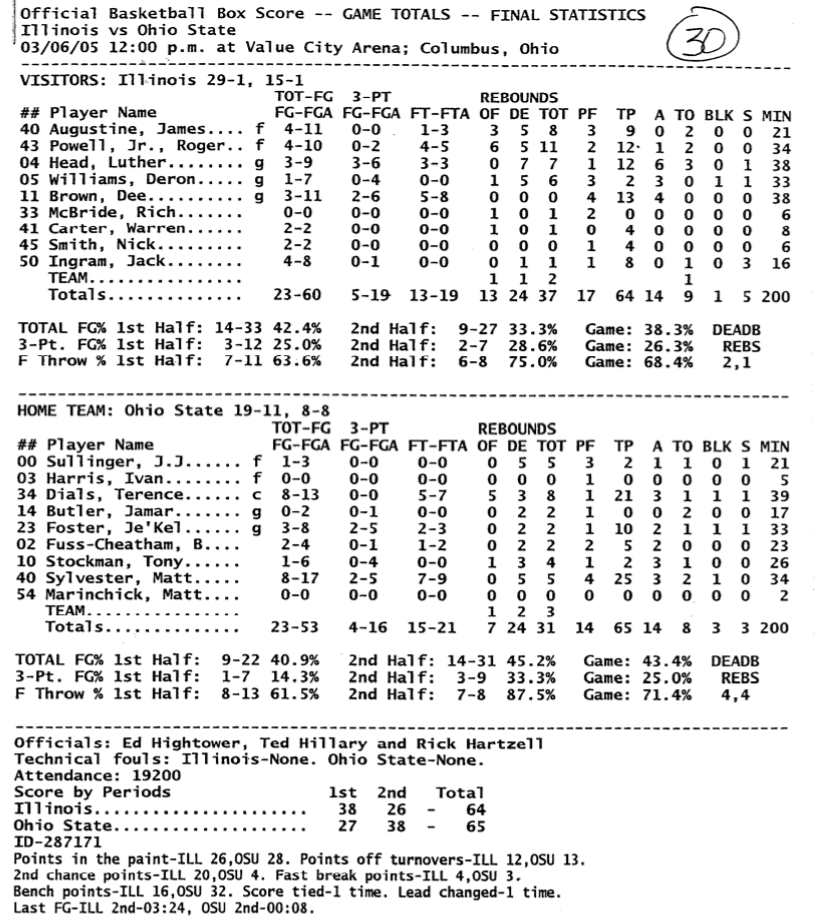