An independent investigation completed by the investigative firm Perkins Coie has detailed sexual abuse committed by former Ohio State doctor Richard Strauss on at least 177 former OSU students while Strauss was employed by the University from 1979 to 1998.

Ohio State released the report on Friday, which also states that University personnel at the time had knowledge of complaints and allegations and yet never investigated the claims in a meaningful manner.

“On behalf of the university, we offer our profound regret and sincere apologies to each person who endured Strauss’ abuse,” Ohio State President Michael V. Drake wrote in a university-wide message on Friday. “Our institution’s fundamental failure at the time to prevent this abuse was unacceptable — as were the inadequate efforts to thoroughly investigate complaints raised by students and staff members. This independent investigation was completed because of the strength and courage of survivors. We thank each of them for their willingness to share their experiences.”

The report, which contains 232 pages, details Strauss’ career at Ohio State, how the independent investigation was conducted, witness statements, and the numerous ways Strauss was said to have inflicted his abuse, which may have begun the first year he arrived at Ohio State.

Most of the complaints centered around Strauss performing excessive and seemingly unnecessary genital exams of male student-athletes. 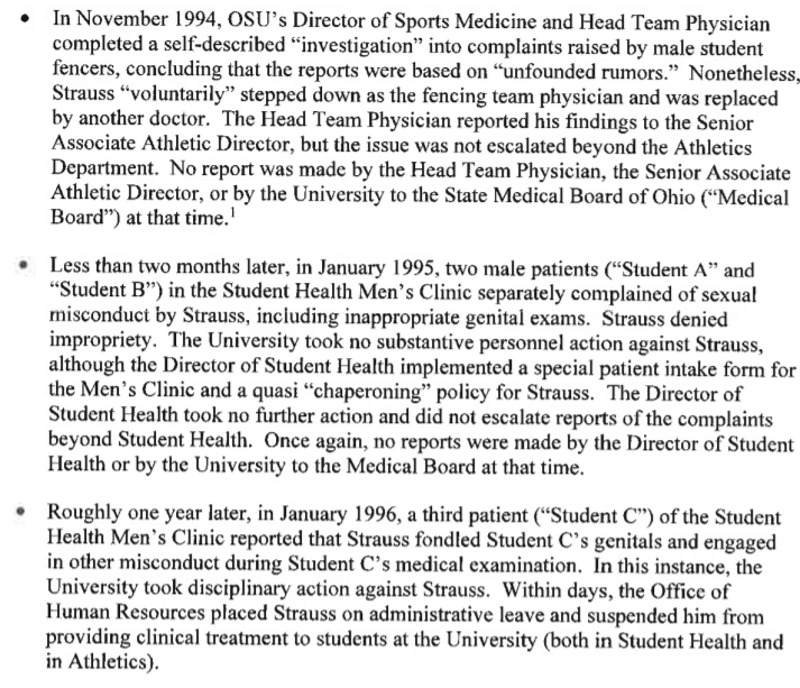 Following the allegations by “Student C,” Strauss retained legal counsel and threatened to take legal action against both Ohio State and the student.

On June 5, 1996, Student Affairs held a closed-session disciplinary hearing concerning these allegations. The participants were limited to Strauss, Strauss’ attorney, the Vice President of Student Affairs, and the Associate General Counsel for Human Resources. None of the student-athletes bringing forth the complaints were allowed to participate.

Following the hearing, Strauss’ employment agreement with Ohio State athletics was terminated at the end of July 1996. He was also informed that his appointment with Student Health Services would not be renewed.

According to the report, soon after being removed from Ohio State as a University physician in 1996, Strauss opened an off-campus men’s clinic, and was assured by Ohio State that there would be no issues with him opening a practice while also retaining his tenured position.

At this clinic, Strauss advertised discounted rates for OSU students in the Ohio State newspaper The Lantern and encouraged student-athletes to use his clinic for treatments. Allegations of abuse continued at Strauss’ clinic as well.

According to The Lantern in 2018, Strauss would provide treatments for student-athletes for free, which encouraged them to continue to see him.

On March 1, 1998, Strauss was permitted to voluntarily retire from Ohio State. In 2005, he killed himself.

Ohio State is in the process of revoking Strauss’ emeritus status.

You can read the entire release from The Ohio State University below, as well as the full report of the investigation  here.

University employees during that time failed to act, report finds

The Ohio State University today released a report from independent investigators that details acts of sexual abuse against at least 177 former students by Dr. Richard Strauss during his employment with the university from 1978 to 1998. Strauss died in 2005.

The report concludes that university personnel at the time had knowledge of complaints and concerns about Strauss’ conduct as early as 1979 but failed to investigate or act meaningfully. In 1996, Ohio State removed Strauss from his role as a physician in both the Department of Athletics and Student Health Services. His actions were reported to the State Medical Board of Ohio that same year. The report found that the university failed to report Strauss’ conduct to law enforcement. He was allowed to voluntarily retire in 1998 with emeritus status.

“On behalf of the university, we offer our profound regret and sincere apologies to each person who endured Strauss’ abuse,” Ohio State President Michael V. Drake wrote in a university-wide message today. “Our institution’s fundamental failure at the time to prevent this abuse was unacceptable — as were the inadequate efforts to thoroughly investigate complaints raised by students and staff members.

“This independent investigation was completed because of the strength and courage of survivors. We thank each of them for their willingness to share their experiences.”

Board of Trustees Chair Michael J. Gasser said Ohio State has been committed to an appropriate response for survivors since allegations were brought to the university’s attention in spring 2018.

“The findings of the report have shaken us to our core,” Gasser said. “The university is committed to supporting the safety and well-being of our entire community. The lessons of the past will continue to inform our efforts today and well into the future.”

Three groups of plaintiffs have sued the university in cases overseen by U.S. District Court Judge Michael H. Watson, and Ohio State is actively participating in a mediation process led by Judge Michael R. Barrett. University officials said they will continue to work with these survivors and through any process outlined by the court.

The report and associated public records are available on the university’s Strauss investigation website.

The university advocated with the State Medical Board of Ohio to be allowed to release the full, unredacted report, and Ohio State filed a motion in that regard with the federal court. The medical board opposed the university’s motion to the court, citing R.C. 4731.22(F). The federal court denied the motion. Therefore, portions of the report referring to the medical board’s investigatory file on Strauss must be redacted. The university will continue to advocate for permission to release the redacted portions of the report.

Ohio State has initiated the process to revoke the faculty emeritus status that was conferred upon Strauss in 1998. The university will continue to review the report and will take additional action as appropriate.

Ohio State announced the independent investigation in April 2018 after receiving a report of abuse committed by Strauss. Perkins Coie was retained to conduct the investigation by Porter Wright Morris & Arthur, the firm appointed by the Ohio Attorney General’s Office as special counsel to the university in connection with the Strauss investigation.

Trombino and Funk reported on the investigation at the Board of Trustees meeting in November. Also in November, survivors addressed the board and shared their experiences. Perkins Coie worked with Ohio State to release regular investigation updates to the public over the past year in order to empower others to determine whether they would want to come forward. As part of that process, Ohio State broadly communicated about the investigation, contacting 115,000 alumni and former student-athletes and reaching an additional 147,000 people through university-wide notifications.

At the start of the investigation, the university referred this matter to the Columbus Division of Police, the Franklin County Prosecuting Attorney’s Office and the Ohio Attorney General’s Office. Each agency has been provided with a copy of the report.“It’s outrageous that the university fundamentally failed to prevent this abuse decades ago,” Drake said. “Ohio State will continue to marshal resources to support survivors and contribute to the national effort of combating sexual misconduct and abuse.”

The university announced earlier this year that it is providing counseling for those affected by Strauss’ actions. Ohio State has also centralized the reporting of sexual misconduct through the establishment of the Office of Institutional Equity — and continues to build on systems already in place over the past two decades through enhanced programming.

The university is covering the cost of professionally certified counseling for those affected by Strauss. The counseling is offered through Praesidium, a nationally recognized leader with extensive experience in providing confidential and sensitive support services. No contact with Ohio State is required, and Praesidium will not share information with the university. Affected individuals can engage in counseling for as long as needed. For those who have received counseling as a result of Strauss’ actions, the university will reimburse those costs through Praesidium.

The Office of Institutional Equity was established as a centralized office that oversees the university’s efforts to prevent and respond to harassment, discrimination and sexual misconduct. The office’s consolidation of reporting and response functions reflects Ohio State’s continuous work to develop enhanced, robust protections for students, faculty and staff. Last week, the university announced the hiring of Associate Vice President Katherine Lasher to lead the office.

These include the implementation in 2016 of mandatory sexual misconduct prevention education for incoming students. The university expanded this requirement in 2018 to all students, faculty and staff. This fall, Ohio State will survey students, faculty and staff as part of an institution-wide initiative on shared values. Additionally, a redesign of the Human Resources service delivery model — part of a university initiative to improve multiple business functions — will include a more integrated approach for all HR decisions, including those related to issues of sexual misconduct involving faculty and staff.

The university has also made improvements in key areas to ensure policies and procedures support the safest possible environment:

The cost of the independent investigation to date is estimated to be $6.2 million.

Ohio State leaders urge anyone who has experienced sexual misconduct while at the university — and the incident involved another student or university employee — to report to the Office of Institutional Equity, the university’s anonymous reporting service or law enforcement.

Anyone who has experienced any form of sexual misconduct outside of Ohio State should contact local law enforcement. Additional resources include:

“As Ohio State Buckeyes, we all play a role in responding to and preventing sexual misconduct and abuse,” Drake said. “It is our collective responsibility to remain ever-vigilant and work to ensure that this can never happen again.”