June 29, 2005 | This story comes from John Porentas and covers one of the more monumental days in Ohio State basketball history — the day high school teammates Greg Oden and Mike Conley announced their commitments to OSU. Oden and Conley were 40% of the “Thad Five” and were instrumental in getting Ohio State to the national title game as true freshmen. Both players only stayed at OSU for one season, but both have kept ties to Columbus and OSU. In fact, Oden is graduating in May and was partaking in Ohio State’s traditional Senior Crawl this week. — TG

It wasn’t quite Christmas in July for Thad Matta, but it was close.

It was late June, the 29th to be exact, and Matta got a big present in the way of verbal commitments from two of the nation’s top prep prospects, center Greg Oden and point guard Mike Conley, both from Lawrence North High School in Indiana. The news, according to Oden, probably put Matta right into a festive holiday mood.

Oden asked Matta what he thought about the idea of he and Conley publicly announcing for Ohio State.

“His response was ‘I don’t drink, but when you guys do it, I’m popping a bottle of champaign,'” said Oden.

There was reason for celebrating in the Buckeye State with the announcement, but according to Conley, it was more of a sense of relief to be out in the open with the decision. The two had been guarding the secret to avoid comments from locals not happy with their choice to leave the Hoosier state, to the extent that neither would show any leaning toward Ohio State despite their desire to attend OSU since their official visit. That included avoiding wearing anything OSU related until the announcement. That has now changed.

“I tried to hide them and just wear them to bed so that nobody would really know that I liked them that much and keep it a secret,” said Conley of his OSU wardrobe, “but I felt a lot at ease with the decision we made today and that I can go along with my life now. 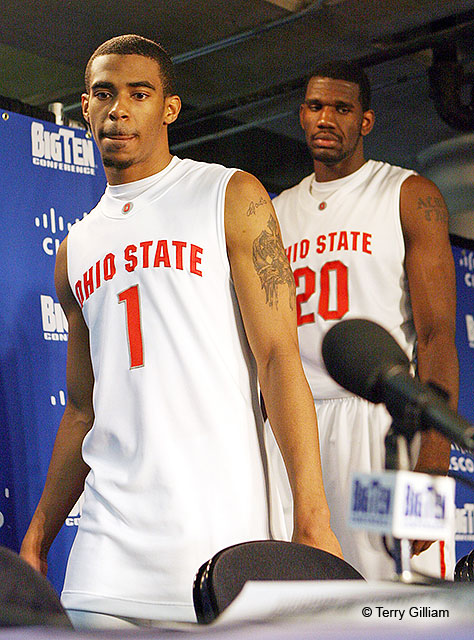 “It’s definitely a big relief. I was holding my breath almost for the past couple of weeks trying to figure out when to make a decision. Now I can just chill out, take deep breaths and relax and have a fun summer.”

The two claimed to have decided to attend OSU independently, but admitted to conferring on the prospect.

“My choices were Ohio State and Wake Forest. He had two other schools as well,” said Oden.

Conley was also considering Indiana and Michigan State, but when he made his official visit to Columbus, the Buckeyes became his immediate leader, and he let Oden know about that as soon as he could.

“When we visited the school it just blew me away. I just pulled him (Oden) over to the side and I told him this was a place that I could see myself playing at. He said the same thing but he still had his other colleges that he wanted to look at,” said Conley.

The two did more looking, but OSU head coach Thad Matta and his staff did all the right things to land the prized pair.

“He did a lot of creative things,” said Conley.

“One of them was he expressed to us his vision of us going to that school and his vision to win a national championship and all the goals he’s had that he thought we could make possible if we went there. Basically we believed everything he had to say. The whole vision part, we bought into it and believed it. He expressed that the most while we were there,” Conley said.

“He text-messages me and I’ll call him as much as I can,” said Conley.

According to Oden, Matta’s game-day strategy also had something to do with the decision.

“The style of play, I like the way that I fit it. It’s a good style for certain people and I feel like I fit in,” said Oden.

Oden said that he did not consider Indiana simply because he wanted to get away from home for his college career.

“There are a lot of guys who go to IU from Lawrence North. Sometimes you want to get away and meet new people,” said Oden.

Both Conley and Oden have a vision for Ohio State basketball that is shared by Matta, and that made their decision easy.

“Basketball is about to become a big thing there. I think that even after we’ve gone and left, just having us come there will bring more attention to the school for basketball as well. They’re already on the map for football.” 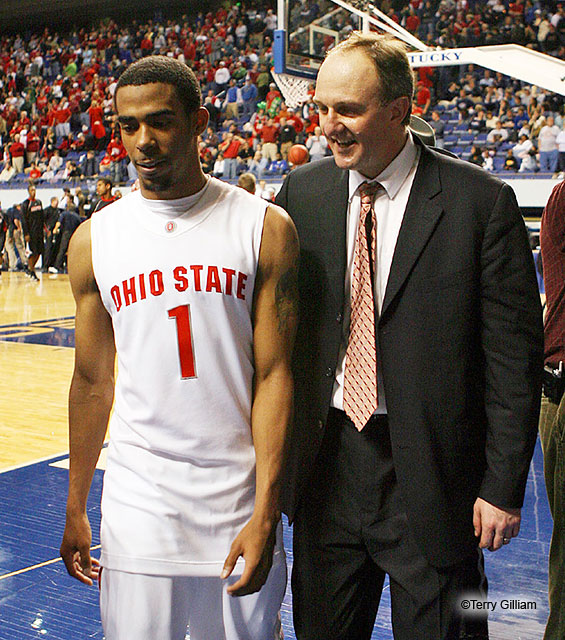 * Not to Worry: Oden and Conley decided to attend OSU despite the recent scandal surrounding the OSU basketball program. They did, however, make gather the facts before making a decision.

“We looked at it and we’re pretty confident that it won’t affect our post-season when we get there,” said Oden.

* Hauling in the Talent: The two now comprise one half on an outstanding recruiting class being assembled by Matta and his staff. Both Oden and Conley are well-aware of what is going on in OSU basketball recruiting and like what they see.

“I have very high expectations for all of us that are going there. I hope our freshman year is a great year and we go really far. I just feel really good about the situation,” said Oden.

“I’m looking at all the recruits that he’s recruiting and talking to them and letting them know what his vision is like,” added Conley.

“I’m very excited about this class. I’ve seen David Lighty play before but I’ve never had a chance to play with him. I’ve played with Greg and Daequan (Cook) for a long time. Having those great players going to the same school is just awesome. I can’t wait to see what happens,” Conley said.

The class is already being compared to the Fab Five at Michigan.

“Being compared to that class is great, but we know we’re not there yet at their skill level,” said Conley.

“We hope that by the time we get to college we’ll have the mind set and physical ability to be able to be compared to them in a real sense.”

* Gotta Be Cool: Both Oden and Conley said that one of the barometers they used to evaluate schools was the outlook and attitude of the players already there. They liked what they saw at Ohio State.

“When we went on our visit and met the players. I said on every visit that I wanted to make sure that the players are really cool,” said Oden.

“The players, the people around the city, the students, everybody treated us well while we were there,” said Conley.

“Just being around the players, they’re good kids and I noticed that he recruits good kids as well as good players. I’d rather be around good people. I like that a lot,” Conley added.

* One More?: With four players in the fold already, there is still room for one more player in this class. Matta would probably like to land a power forward, and according to Conley, has his eye one one that he likes. He even asked Conley to take a look at him.

“I’d like to see Luke Harangody from Adrian in this class,” said Conley.

“He played on the junior all-star team, the one he (Matta) told me to look at. He was very good. I liked the way he played. He was physical and tough and would do all the dirty work. I said we need somebody like that. We don’t need all super-super stars that can jump out of the gym. We need a big man who can do the little things as well.”