COLUMBUS, Ohio – Heisman Trophy finalist Dwayne Haskins and NCAA indoor track and field national champion Sade Olatoye are Ohio State’s 2019 Male and Female Athletes of the Year. Both will now be placed on the ballots for Big Ten Athlete of the Year awards, with the winners to be announced by the conference soon. Did You Know: Dwayne Haskins’ nine 300-yard games in 2018 are the most in a single season and a career.

Haskins left no doubt that he was among the great quarterbacks in Ohio State and Big Ten history when he threw for 4,831 yards and 50 touchdown last fall while leading the Buckeyes to the Big Ten title and a Rose Bowl Game victory over Washington. Haskins set 28 Ohio State and seven Big Ten records in 2018, including passing yards, touchdowns and total offensive yards (4,939). In addition to making the trip to New York City last December as a Heisman Finalist, Haskins was also named the Big Ten’s Graham-George Offensive Player of the Year, the Griese-Brees Quarterback of the Year and won the Chicago Tribune Silver Football award.

In two of the Buckeyes’ biggest games of the year – a 62-39 win over No. 4 Michigan and a 45-24 triumph against No. 21 Northwestern in the Big Ten Championship Game – Haskins threw for 895 yards and 11 touchdowns with just one interception. With a second-quarter TD pass in the Rose Bowl, Haskins became just the sixth player in FBS history to toss 50 touchdown passes in a single season. In April, he was the 15th overall selection in the first round of the NFL Draft by the Washington Redskins.

A communications major, Haskins earned OSU Scholar-Athlete and Academic All-Big Ten honors in 2018. He is from Potomac, Md. Did You Know: Olatoye did not place lower than sixth in any meet that she competed in during the 2019 outdoor season.

Olatoye, a Dublin, Ohio, native and standout thrower for the women’s track and field program, holds four Ohio State records: both indoor (17.88m) and outdoor (17.88m) shot put along with weight throw (24.46m) and hammer throw (67.49m), all of which she claimed or lowered this season. Olatoye’s school record in the weight throw led to a national championship in the event, and it was also good for third-best all-time in NCAA history.

Thanks in large part to Olatoye’s efforts at the Big Ten Indoor Championships – which included individual titles in the shot put (17.88m) and hammer throw (24.07m) – the Buckeyes won their second team championship in program history. Ohio State also won the conference’s outdoor team title, marking the first time in eight years that the program completed the indoor-outdoor sweep. 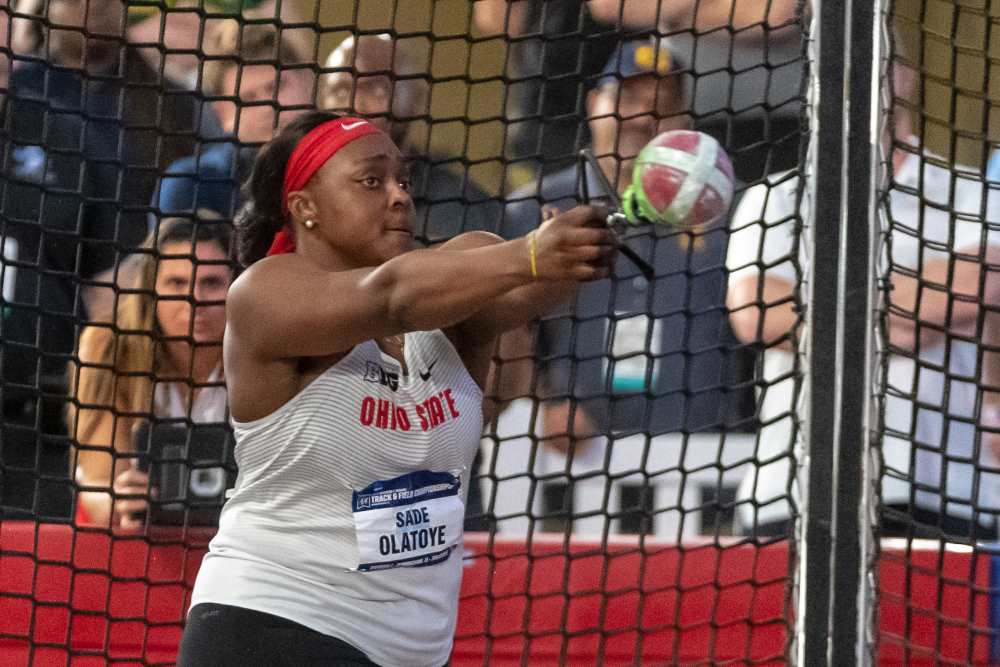 At the NCAA Outdoor Track and Field Championships, Olatoye finished third in the shot put and fourth in the hammer throw, becoming a four-time First Team All-American. Olatoye earned Big Ten titles in both the weight throw and indoor shot put, as well as finishing runner-up in the outdoor shot put and hammer throw. Throughout the regular season, Olatoye earned five consecutive Big Ten Field Athlete of the Week awards, becoming the first athlete in Big Ten history to accomplish the feat.

The senior received numerous awards throughout the 2018-19 campaign, including Big Ten Indoor Field Athlete of the Year and Great Lakes Regional Field Athlete of the Year. Olatoye was also named to the Pre-NCAA Indoor Watch List for the Bowerman, collegiate track and field’s highest honor, the first Buckeye to make the list in program history. Olatoye earned 16 gold medals during the 2018-19 season, never placing lower than sixth in any meet.