The Ohio State Buckeyes are set to host in-state opponent Cincinnati on Saturday in Ohio Stadium.

Friday morning, the Bucks released a depth chart for this weekend’s game.

There aren’t a whole lot of surprises or changes from the one issued before the season-opener against Florida Atlantic.

In fact, the entire starting offense is the same as it was a week ago.

Justin Fields is the starting quarterback and J.K. Dobbins starts at running back. Binjimen Victor and K.J. Hill are the starters at two wide receiver positions, while Austin Mack and Chris Olave are listed as co-starters at the third.

Luke Farrell is the starting tight end, and senior Rashod Berry is back on the depth chart after missing the FAU game with an injury.

On defense, the return of sophomore defensive ends Tyreke Smith and Tyler Friday will provide more depth up front.

One interesting note: Friday is listed as the starter opposite Chase Young, while Smith is listed as an “OR” with Javonatae Jean-Baptiste behind Young.

Both players are apparently full-go for Saturday, as neither is listed as a game-time decision.

That also allows senior Jashon Cornell to slide back inside to the 3-tech defensive tackle spot. He is listed as the starter there. Cornell started at defensive end, opposite Young, last week with Smith and Friday out.

The backup running back spot continues to be a four-man race between Demario McCall, Master Teague, Marcus Crowley, and Steele Chambers.

Demario McCall is the top kick returner, and K.J. Hill is the No. 1 punt returner.

You can see the entire 2019 Ohio State depth chart for Week 2 below. 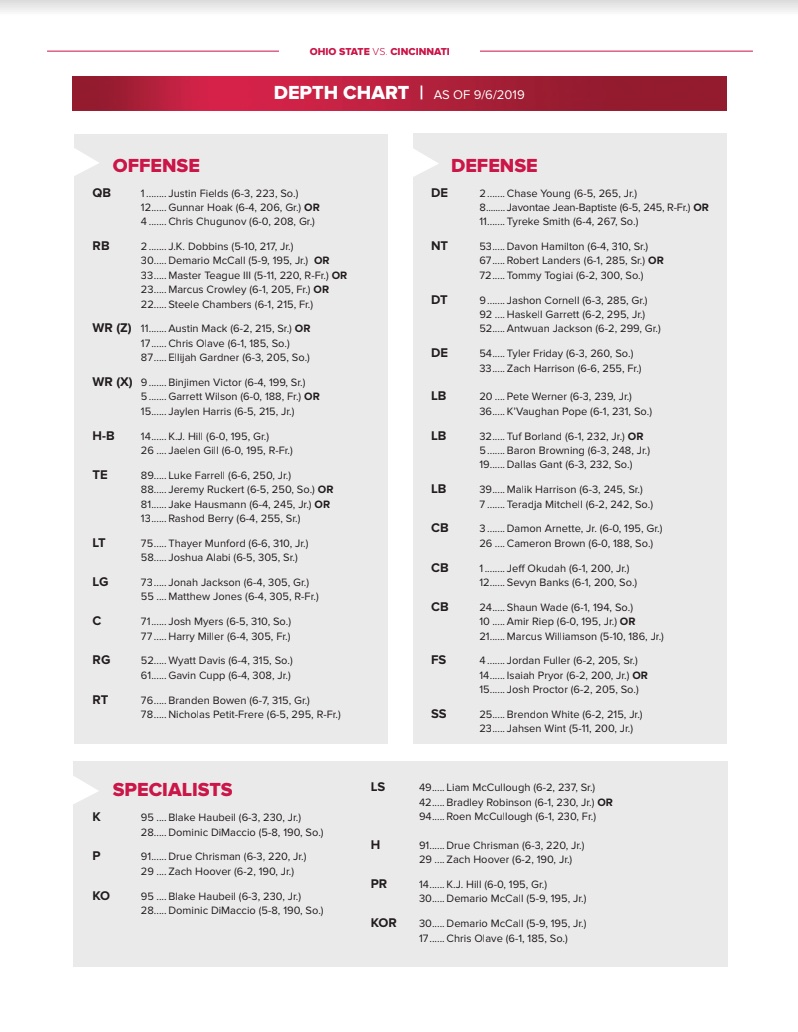 You can download a PDF copy of the depth chart below.