I was close on some aspects of this game but like many people I thought it would be much closer than it was. Read: I thought Cincinnati might score some actual points. But, I’m not complaining.

Justin Fields made me look smart last Saturday, which is a rare feat and one that I’m eternally grateful for. My prediction for him was 20 completions for 238 yards and 2 TDs, along with 8 rushes for 48 yards. In actuality, his numbers were 20 for 224, 2 TDs, 9 carries, and 42 yards. So, yeah, let’s just start and end this thing there. What I didn’t account for were his 2 rushing TDs. Not a bad performance by the young transfer.

JK Dobbins led the way in rushing, crushing my predicted total of 110 yards on 27 carries by going 141 on just 17. Master Teague III and Demario McCall got carries, as predicted. However they got way more of them and also let Steele Chambers and Marcus Crowley in on the fun again.

KJ Hill proved himself to be the Buckeyes’ main receiving target, pulling in 8 catches for 57 yards and a score, just off from the 60 and a TD that I’d assigned him. Mack and Wilson were correct on receptions and Olave was in the ballpark on receiving yards, though he did it on 2 fewer catches than I’d guessed.

The specialists kicked balls. Blake Haubeil made 6 kicks, as I’d guessed, except they were all PATs. Drue Chrisman only saw the field three times and made them count for a 43 yard average and two punts that pinned UC deep in their own territory.

Overall, the Bucks looked like a championship-caliber team last week and look to continue that momentum against Indiana in Columbus this weekend.

Perhaps the boldest prediction that I can make: Justin Fields’ Buckeyes are immune to the otherwise proven fact that Indiana will annoy and stick around far too long in this game. 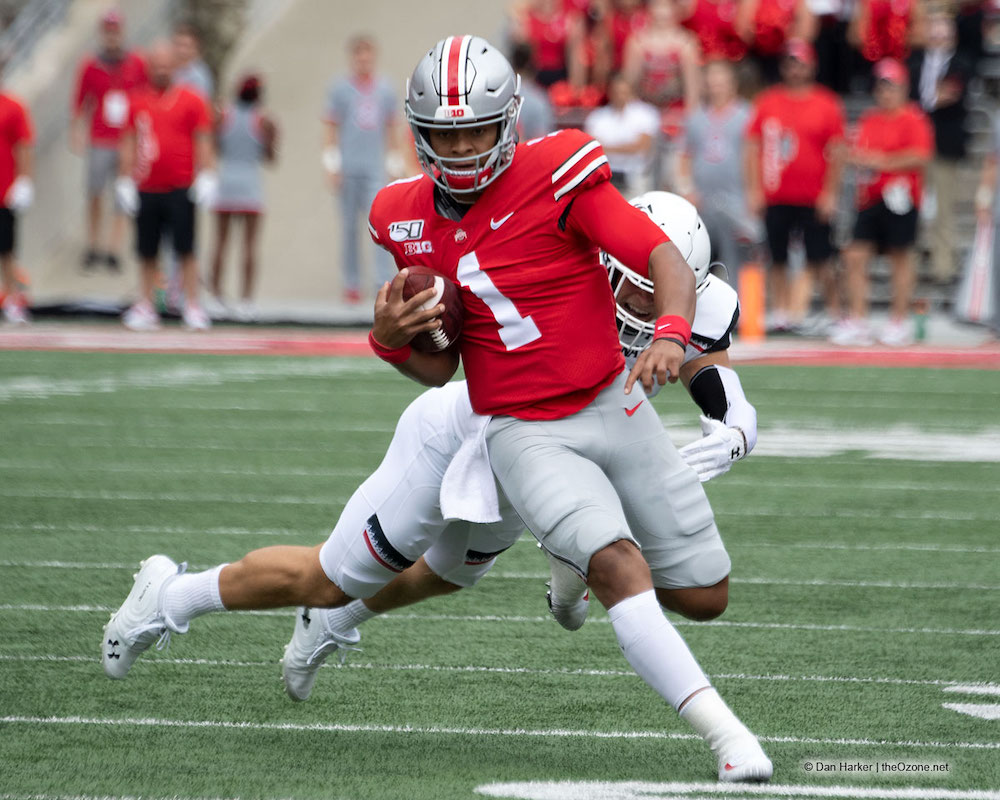 The Hoosiers will get on the board, perhaps with a few more points than we’d like, but there will be no scare. No threat of an upset. Just another display of Fields’ athleticism and firm grasp of Ryan Day’s system. He throws for over 250 yards, tosses 2 TDs, rushes for another (again), and controls the Hoosier D with relative ease.

Dobbins will pick up where he left off against Cincinnati. He’ll find gaps in the Indiana defense, consistently get to the second level, and rush for multiple plays of 10+ yards. He’ll also earn another two scores in this contest.

The offensive line will get a solid push at the line of scrimmage and the Buckeyes will control the ball game. Master Teague III will once again get more carries than Demario McCall, securing himself as the backup back to Dobbins. Both backs will move forward at over four yards a touch as they close out another OSU victory in Bloomington.

Fields finds KJ Hill another seven times in this one as he again finds holes in the coverage and catches anything near him. Chris Olave makes another big play, going 25+ for a score. Austin Mack moves the chains and hauls in a sideline grab for a touchdown.

Binjimen Victor, once again, has a big gain in this one, showing that he continues to be a viable downfield threat. Jeremy Ruckert, Garrett Wilson and Jaelen Gill all get onto the field and into the box score, and Wilson adds another two catches to his name.

Blake Haubeil connects on each of six PATs and also chips in a field goal. Yes, I said six PATs for anyone paying close attention. That’s rushing TDs for Dobbins (2), Fields (1), and receiving scores for Olave and Mack (1 each). I have the Silver Bullets putting a defensive score on the board in this one.

Drue Chrisman blasts four punts for 175 yards, dropping another two inside of the 20.

Ryan Day moves to 3-0 and J.K. Dobbins jumps to the top of the Big Ten rushing leaderboard, outrushing Wisconsin’s Jonathan Taylor by over 100 yards on Saturday!!