The No. 18 Ohio State Buckeyes and the Cincinnati Bearcats will begin their respective seasons Wednesday night in Value City Arena. The game tips off at 8:30 pm on Fox Sports 1 (FS1). These two teams last played 365 days ago. The Buckeyes came away with a 64-56 win over the home Bearcats.

Who: Cincinnati at Ohio State

Why: Because Cincinnati will never be forgiven for the Damon Flint fiasco. 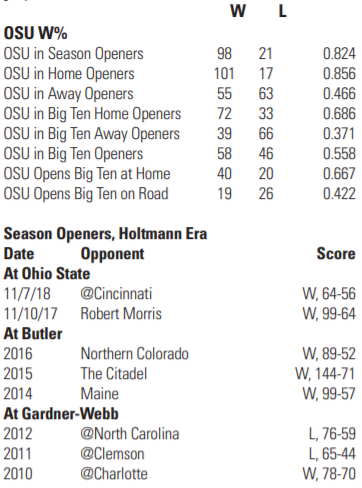 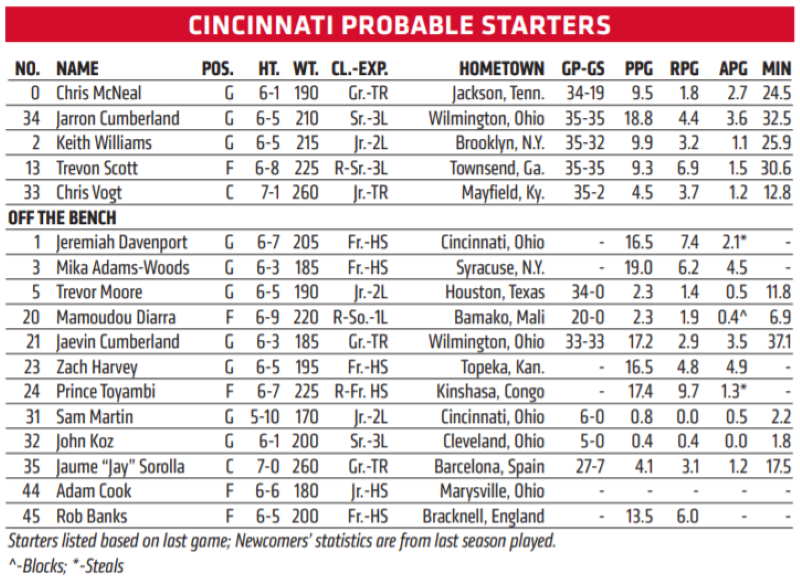 +  John Brannen was named the 27th head coach in University of Cincinnati men’s basketball history on April 14, 2019. Brannen had served as Northern Kentucky University’s head coach since the 2015-2016 season, taking the Norse to unprecedented success as the school’s athletics department underwent reclassification. Since earning active Division I status eligibility prior to the start of the 2016-17 season, the Norse men’s basketball program has compiled a 72-30 overall record, making three consecutive postseason appearances (NCAA Tournament [2017, 2019], NIT [2018]), winning back-to-back Horizon League regular-season championships (2018, 2019) and claiming a pair of conference tournament titles (2017, 2019). No other school in the nation has enjoyed NKU’s amount of success in its first three years with active status at the Division I level. Brannen, whose coaching career spans 20 seasons, owns an 82-52 career record as head coach. He registered an 81-51 ledger in four seasons at NKU and a 1-1 mark as Alabama’s interim head coach at the end of the 2014-15 campaign.

+ Cincinnati was predicted to finish third in the American Athletic Conference (behind Memphis and Houston, who tied for first) according to a preseason polling of league coaches in October. Senior guard Jarron Cumberland was tabbed the AAC Preseason Player of the Year by the league’s coaches. He also earned selection to the Jerry West Shooting Guard of the Year Watch List. 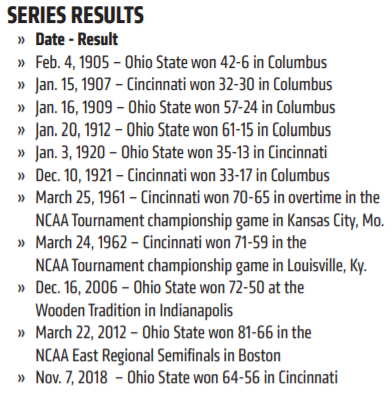 + Ohio State leads the all-time series with the Bearcats 7-4, including a 3-2 advantage in Columbus and 2-0 lead in Cincinnati. The series is tied 2-2 at neutral sites. Ohio State earned a 64-56 win last season in Cincinnati in the season opener for both teams. It marked the first game played in newly renovated Fifth Third Arena and the first time Ohio State had visited Cincinnati in the regular season since 1920. Wednesday marks the first regular-season meeting in Columbus since 1921, when the Bearcats earned a 33-17 win.

+ Jarron Cumberland averaged 18.8 points, 4.4 rebounds, 3.6 assists and 1.1 steals last season. The first returning league player of the year for Cincinnati since Steve Logan (Conference USA 2001 and 2002), Cumberland accounted for 657 points a year ago, the 10th most in a season in program history. The prolific scorer placed his name in consideration for the NBA Draft soonafter the conclusion of last season but announced his decision to return to the Bearcats in late May.

+ Grad transfer guard Jaevin Cumberland (Oakland), cousin of Jarron Cumberland, averaged 17.2 points and 3.5 assists while making nearly 40 percent of his tries from three-point range in 2018-19. He gives UC another threat from long range after ranking 22nd in the nation with 3.3 three-pointers per game last season.