COLUMBUS, Ohio – The No. 10 Ohio State men’s basketball team topped Purdue Fort Wayne, 85-46, Friday night at Value City Arena. With the win, which was head coach Chris Holtmann’s 50th at the helm, the Buckeyes move to 5-0 on the year while the Mastodons drop to 2-5.

Ohio State scored the first five points of the game and held a 9-7 lead at the 16:36 mark of the first half after a DeBerry 3-pointer for the Mastodons. The Buckeyes followed with a 16-0 run over a 6:46 spurt to take a 25-7 advantage on a Duane Washington Jr. 3-pointer with 9:25 remaining. Ohio State extended its lead to as many as 21 twice in the final three minutes of the first half before Purdue Fort Wayne scored the final four points of the half as the Buckeyes held a 42-25 lead at the break.

The Buckeyes, who held a 16-2 advantage in bench points and a 12-3 lead in points off turnovers over the first 20 minutes, were paced offensively by Washington Jr. with eight points while DeBerry led the Mastodons with 12.

Ohio State connected on 10 of its first 14 attempts from the field in the second half on its way to a 27-7 run and a 69-32 advantage with 9:27 remaining. The 3-point ball, including three in a three-minute spurt from Justin Ahrens, then pushed the Buckeye lead to a game-high 46 at 84-38 with 3:56 left to play as Ohio State came away with the convincing victory. 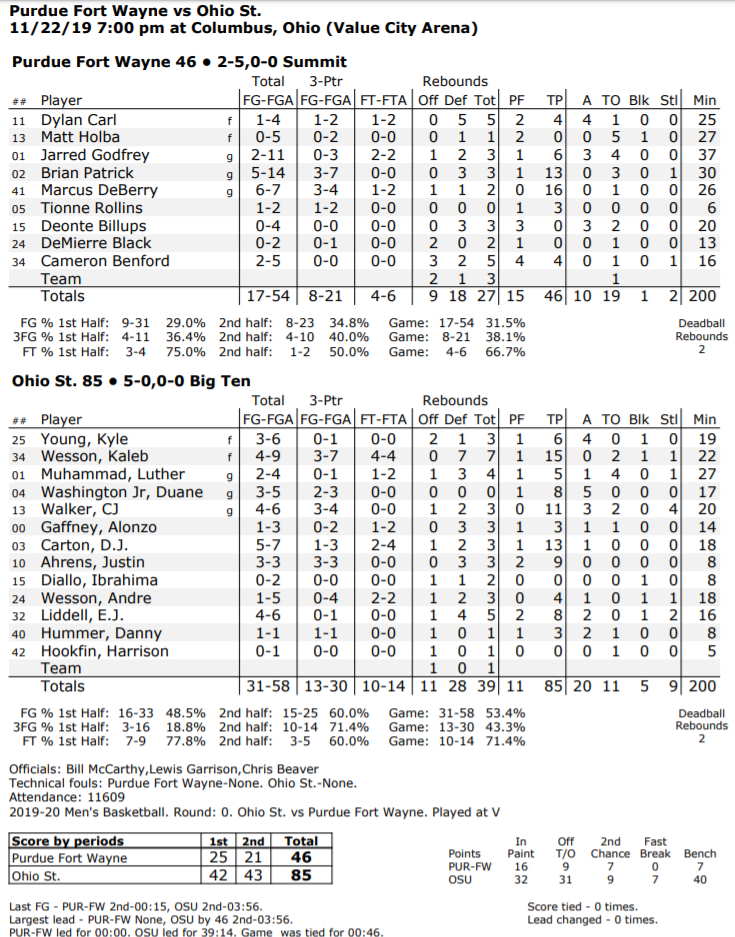