COLUMBUS — The #10 Buckeyes (4-0) got off to an 8-0 start Monday night against Stetson (2-2) and things only got worse from there for the Hatters as Ohio State dominated every aspect of their 86-51 win over their Atlantic Sun foes.

Ohio State was led by junior forward Kyle Young, who scored a team-high 15 points on 5-of-5 shooting, including his third-career three-pointer. Young also added a game-high 10 rebounds in his 16 minutes of action. Fellow forward Kaleb Wesson added 13 points and eight rebounds.

Freshman point guard DJ Carton was the only other Buckeye in double figures, scoring 10 points and handing out a game-high five assists.

This game also featured the return of senior forward Andre Wesson, who suffered a broken eye socket in the season opener against Cincinnati. He did not start, but he did play 21 minutes, scoring six points on 2-of-5 shooting from three.

An alley-oop from point guard CJ Walker to Carton gave Ohio State a 24-3 lead just 9:22 into the game. A jumper the next time down for Carton gave the Buckeyes a 26-3 lead.

Buckeye head coach Chris Holtmann emptied the bench early, allowing young players to get some good experience. One of those players was freshman center Ibrahima Diallo who dropped in a bucket to make it 28-3. Diallo scored a career-high six points for the Buckeyes and grabbed five rebounds in 10 minutes.

Ohio State’s first 30-point lead of the game came following a basket from freshman forward EJ Liddell, who scored eight points on 3-of-10 shooting. That lead grew to 34 points following a layup by Carton, but settled in at the half with the Buckeyes leading 42-14.

Sophomore guard Duane Washington opened the second half with a three-pointer. Washington scored nine points in the game, hitting three of his four three-point attempts. Washington had a +/- of 29 in just 14 minutes of work.

The Buckeyes’ first 40-point lead came following a CJ Walker layup, giving OSU a 59-19 lead with 15:41 to play. A Justin Ahrens three a few minutes later helped get the lead up to 46 points, and a free throw by Young at the 8:19 mark gave Ohio State a 77-30 lead, which was their largest of the game.

Ahrens scored nine points on 3-of-7 shooting, all of which occurred from behind the three-point line.

Walker finished with five points, three rebounds, and five assists for the Buckeyes.

The Buckeyes outscored Stetson 41-12 off the bench.

Up next for Ohio State is Purdue-Ft. Wayne Friday night at 7:00 pm, which will only be able to be seen on BTN Plus. 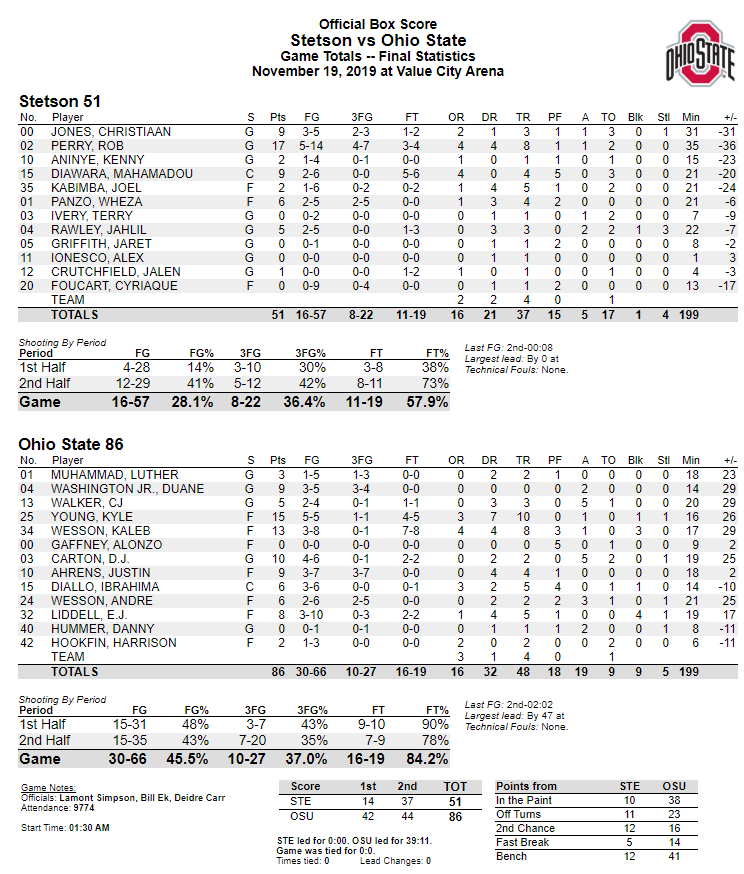