Taylor was the only unanimous selection on any of the All-Big Ten teams.

Dobbins and Fields were named to the first team by both the coaches and the media.

Also making the coaches first team was graduate senior left guard Jonah Jackson, who transferred to Ohio State from Rutgers back in the spring.

Junior left tackle Thayer Munford was named Second-Team All-Big Ten by both the coaches and media.

Redshirt freshman running back Master Teague made Third-Team by both the coaches and media. Sophomore receiver Chris Olave was a Third-Team selection by both parties as well.

Teague has rushed for 780 yards and four touchdowns this season. He is first in the Big Ten and sixth in the nation with 359 yards rushing in the fourth quarter this season.

Olave, who has caught 41 passes for 705 yards this season, is tied for the Big Ten lead with 11 touchdown receptions.

Fourth-year junior tight end Luke Farrell made Third-Team All-B1G by the coaches. He was an honorable mention selection by the media.

Fifth-year senior receiver KJ Hill was named Honorable Mention by both the media and coaches. 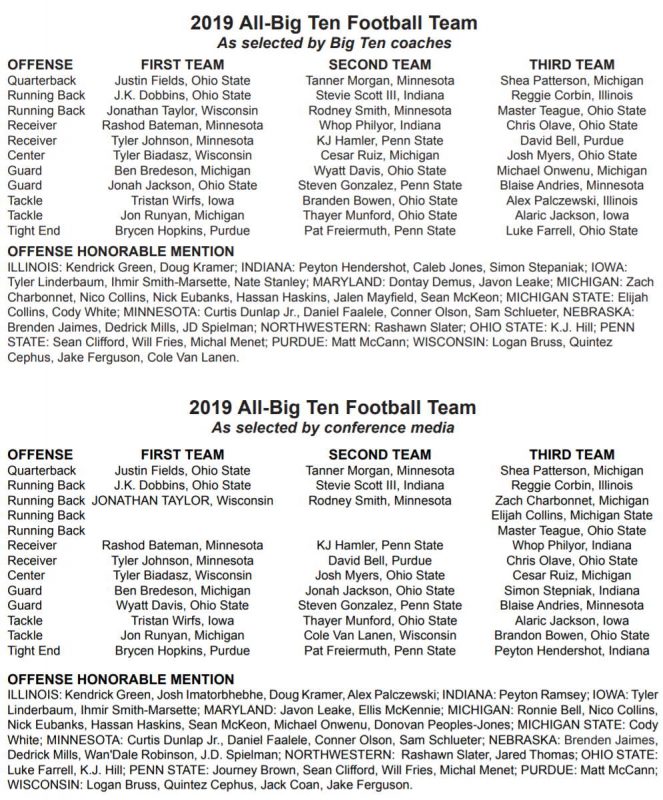 On Tuesday, the 2019 All-Big Ten Defensive selections were released.