CLEVELAND, Ohio – The No. 2 Ohio State men’s basketball team fell to No. 22 West Virginia, 67-59, Sunday afternoon at Quicken Loans Arena in Cleveland. With the loss, the Buckeyes fall to 11-2 on the year while the Mountaineers improve to 11-1.

Kaleb Wesson led Ohio State with 17 points to go along with nine boards while Duane Washington Jr. scored 12 and Luther Muhammad and CJ Walker scored 10 apiece. Miles McBride went for a game-high 21 points for the Mountaineers while Chase Harler poured in 10.

The Buckeyes got out to an early lead in a tightly-contested first half but were never able to push the advantage to more than four before a Harler 3-pointer gave the Mountaineers their second lead of the contest with 7:38 remaining in the opening period. With the game tied at 24-all with 6:19 left to play, Ohio State went on a 13-4 spurt over the next 5:17 to regain the lead at 37-28 with 1:02 remaining before a Sean McNeil 3-pointer trimmed the Buckeye advantage to 37-31 at the break.

Walker led the Buckeyes with 10 points in the opening 20 minutes while Muhammad poured in nine. McBride paced West Virginia with 10.

The Mountaineers came out of the break on a 10-3 run, using a 3-pointer and a jumper from McBride, to take a 41-40 lead with 13:28 remaining. West Virginia then pushed its lead to 52-47 on a 3-point play by Jermaine Haley with 8:38 left to play but the Buckeyes answered right back, using four free throws from Kaleb Wesson and a 3-pointer from Andre Wesson to regain the lead at 54-53 at the 4:40 mark.

However, the Buckeyes missed five of their next six shots as West Virginia went on an 8-0 run over the next 4:43 to take a 61-54 lead with 57 seconds left to play. Kaleb Wesson followed with a 3-pointer to trim the deficit to 61-57 and the Buckeyes forced a turnover on the ensuing inbounds play but a Washington Jr. 3-pointer rimmed out and Kaleb Wesson’s follow-up layup was blocked as the Mountaineers came away with the win.

The Buckeyes turned it over a season-high 22 times in the defeat and the Mountaineers held a 22-10 advantage in points off turnovers. Ohio State shot 31.3 percent (15-for-48) from the field while the Mountaineers converted 40.7 percent (22-for-54) of their shot attempts. 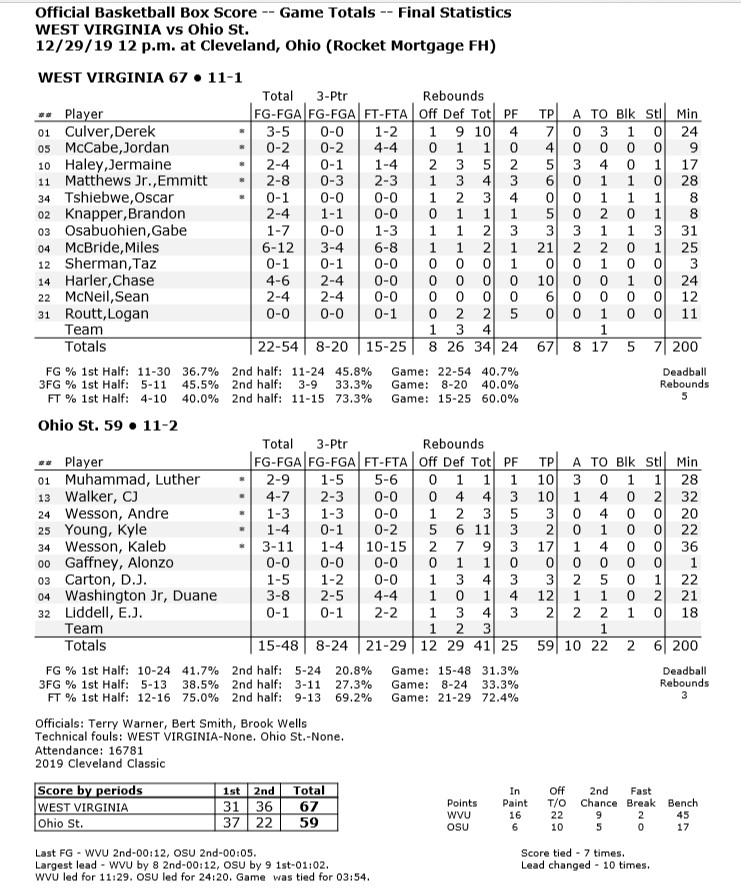