The Big Ten Championship Game has long passed, so I won’t bore you with a summary of how my statistical projections for that contest played out. Let’s just assume that I nailed each and every guess as we move on and focus on the Fiesta Bowl.

As the Buckeyes prepare to take on the undefeated Clemson Tigers in the desert, I’ve devoted countless hours (roughly 26 minutes) of study and research to deliver you the most accurate prediction of offensive statistics for your Buckeyes as possible.

Justin Fields has only attempted more than 25 passes in a game one time in this entire season. Unfortunately for me and my stat projections, it was in the most recently played game. Against Wisconsin, in the Big Ten Championship Game, Fields tossed the ball 31 times. Though it was the most recent sample, I’m going to revert back closer to his average and say that he’ll throw the ball 26 times in the Fiesta Bowl against Clemson. This would be his second highest total of the year, but only one above his favorite attempt tally of 25.

Of his attempted passes on Saturday, Justin Fields will complete 17. Two of the aforementioned completions will go the distance and put points on the scoreboard. In addition, he’ll use his hopefully 100% healthy legs to stretch the defense on 10 runs. These designed plays and scrambles will earn him 37 rushing yards and a score on the ground. Fields will throw for just under 250 yards, making it the second highest passing yardage total that the Tigers will have given up all season.

Fields’ 65.4% completion percentage will also be the highest marks against the strong secondary. In fact, Clemson has held teams to under 40% more often than they’ve allowed someone to top 60%.

How many people have rushed for more than 130 yards in a game against Clemson this year? Not a single one.

So, I’m playing it safe and keeping J.K. Dobbins’ total under that threshold, right? Not a chance.

The junior running back has averaged over 30 carries and exactly 180 yards in his last three games. I expect the Buckeyes to lean heavily on him again in the Fiesta Bowl, rushing 29 times with the powerful, little back. He’ll put up just under 150 yards, and also get into the endzone twice. Once again, this is a feat that no other running back, or team for that matter, has managed to do against the Tigers this year. They’ve given up just 7 rushing touchdowns all year, not allowing any team to do so twice in a game let alone the 3 rushing TDs that I’ve projected. Dobbins will also be involved in the passing game, offering an easy target out of the backfield for Fields. He’ll bring in 3 catches for 25 yards on the day. 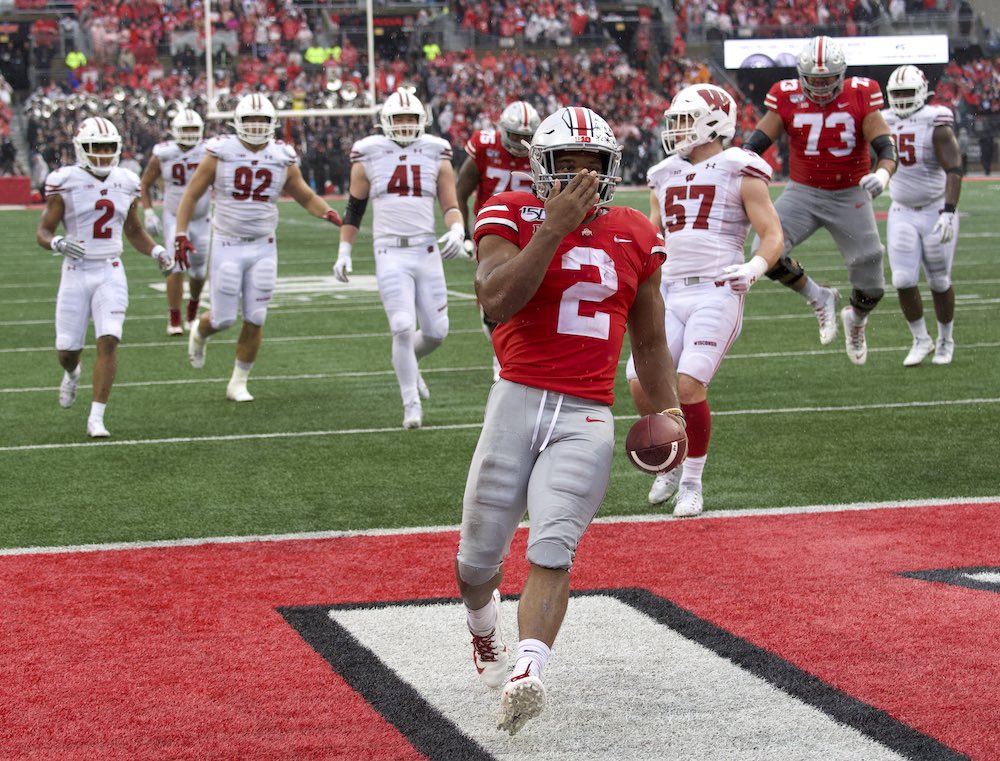 OSU will also utilize Master Teague’s power and fresh legs to spell Dobbins at times. Having the Big Ten’s sixth leading rusher come off the bench is just one of the many benefits of excellent recruiting and player development. Teague will wind up with 9 carries for 43 yards. However, it will be his ability to provide a different look for the Buckeye offense, along with allowing J.K. Dobbins to stay fresh, that are the key factors in the Buckeyes’ success in the run game.

Here we go… my forte, predicting exactly what players will catch passes from Fields!

Drue Chrisman punts 6 times against Clemson, his highest output on the season, and does so with excellent range.

Ryan Day draws up a successful gameplan for the Buckeye offense. The O-line allows Dobbins to punch through for good yardage. Day also balances the attack with many short passing routes that stretch the field and tire the talented Tiger defense. On the opposite side, Etienne and Dixon combine for over 100 yards rushing, but the Bucks’ defense gets enough big 3rd down stops to slow an offense used to consistently scoring in the 50-point range. OSU also forces 2 Trevor Lawrence turnovers on the day, which play a huge part in the final score.

For the faint of heart, such as my brother’s father-in-law who only watches games once he knows if OSU wins, you may want to look into a mild sedative prior to kickoff. The Bucks and Tigers will go back and forth in this matchup with the outcome unclear until very late in the game. Ohio State will go into the final quarter of play up 31 to 24. After the teams trade touchdowns, Clemson will drive home a field goal but fail to recover the subsequent onside kick. Ryan Day earns his first bowl victory as OSU’s head coach and prepares the team for the national title game in New Orleans on January 13.