Kaleb Wesson led all scorers with 22 points, which he managed on just 7-of-10 shooting. He also pulled down a game-high 13 rebounds. The rest of the Buckeyes, however, shot just 12-of-37 from the field.

Ohio State was without starting forward Kyle Young due to appendicitis and it was clear they were missing his energy throughout.

Wisconsin outscored Ohio State 16-6 in points off of turnovers.

There were more than six minutes played in this game before anybody other than Kaleb Wesson scored a point. The Buckeyes led it 7-0 — all thanks to Wesson — until a layup by former Buckeye Micah Potter made it 7-2 with 13:52 to play.

Following layups by Luther Muhammad and Wisconsin’s Aleem Ford, Potter dropped in a jumper to make it 9-6. The Badgers tied it at 9-9 with 10:37 to play, but the Buckeyes went on a 6-0 run with a free throw by Kaleb Wesson and a layup and then three-pointer from Duane Washington.

The Badgers immediately answered with three-pointers from Nate Reuvers and Brevin Pritzl, tying it at 15-15 with 7:45 remaining in the half.

With Ohio State leading 19-15 with 4:53 to play, Kaleb Wesson picked up his second foul and went to the bench. The Buckeyes were able to maintain that 4-point lead for most of the way, at least until Wisconsin went on an 8-0 run over the final 1:14 of the half, featuring three-pointers from Trevor Anderson and Aleem Ford.

Wisconsin’s lead was 29-25 at the half, but the Buckeyes came out firing in the second half. A three-pointer from Washington cut the lead to one point, but a jumper from Kobe King pushed it back up to three points at 31-28.

The Badgers then began their comeback. However, after baskets from Tyler Wahl and D’mitrik Trice, Kaleb Wesson hit a three, making it 41-35 with 11:31 remaining. That three was answered by a layup from Trice.

A pair of free throws and a layup from Kaleb Wesson were sandwiched by a two-point and three-point jumper from Kobe King. A jumper from Brevin Pritzl made it 45-44 with 8:05 to play.

Wisconsin then tied it on a Buckeye turnover-turned King layup to make it 47-47. Kaleb Wesson then immediately answered that with a pair of free throws to get the lead right back with 6:33 remaining. The Badgers’ next time downcourt, King drove it down the lane, but Wesson was there to block the shot.

Washington made it a 4-point lead with a curling layup with 4:30 to play. Following a layup by Wahl, the Buckeyes turned the ball over on their next two possessions, allowing the Badgers to grab a 52-51 win lead with 1:54 to play.

A three-pointer from Brevin Pritzl made it 55-51, but that was countered immediately with a three from Washington, who was 4-of-16 shooting prior to that basket.

With under a minute to play, Trice missed a jumper, but the Badgers grabbed the rebound and Trice was fouled. He made both of his free throws. Kaleb Wesson missed a three-pointer with 19 seconds remaining to effectively end the game. Nate Reuvers drained a pair of free throws to make it 59-54 with 14 seconds to play. 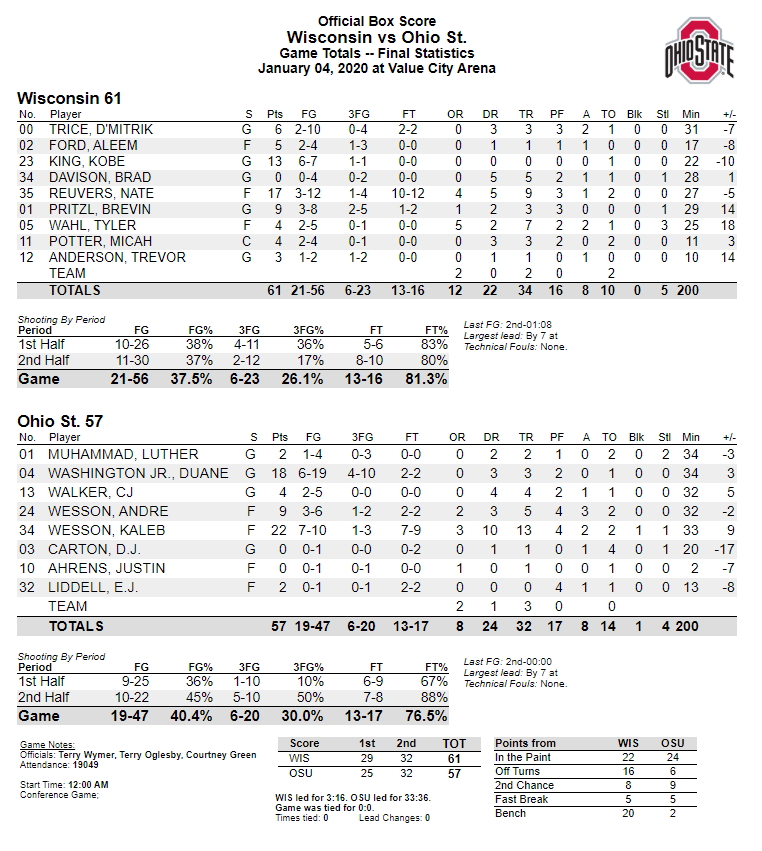