Last week we started a series on the vast differences between recruiting at Ohio State and Michigan.

We took the respective recruiting rankings of every scholarship player on both rosters (as well as Penn State, who operates possibly as some kind of control group in the woods) and began comparing them against the position groups they will face on the field.

That study encompassed the recruiting rankings of the Buckeye receivers, quarterbacks, and offensive tackles and pitted them against the Wolverine cornerbacks, safeties, and defensive ends.

Among the many numbers to come out of the study — of the 28 Michigan pass defenders listed, three of them were Top 100 recruits.

On the other side of the ball for the Buckeyes, 12 of the 22 players listed were Top 100 recruits.

This gives you a pretty good idea of the mismatches that have allowed for two consecutive offensive outbursts against the Michigan defense. In those last two games, the Buckeyes have thrown for over 700 yards total, and the differences in the talent has been obvious.

But what about the Michigan passing game as it compares to the Ohio State pass defense?

The good news for the Wolverines is that things aren’t so disparate at the moment. This has been helped by the early departures of Chase Young and Jeff Okudah, both of whom were Top 10 prospects in the 2017 recruiting class.

Here’s the chart of Michigan’s pass offense against Ohio State’s pass defense, with the players’ overall rankings and position rankings in parentheses. 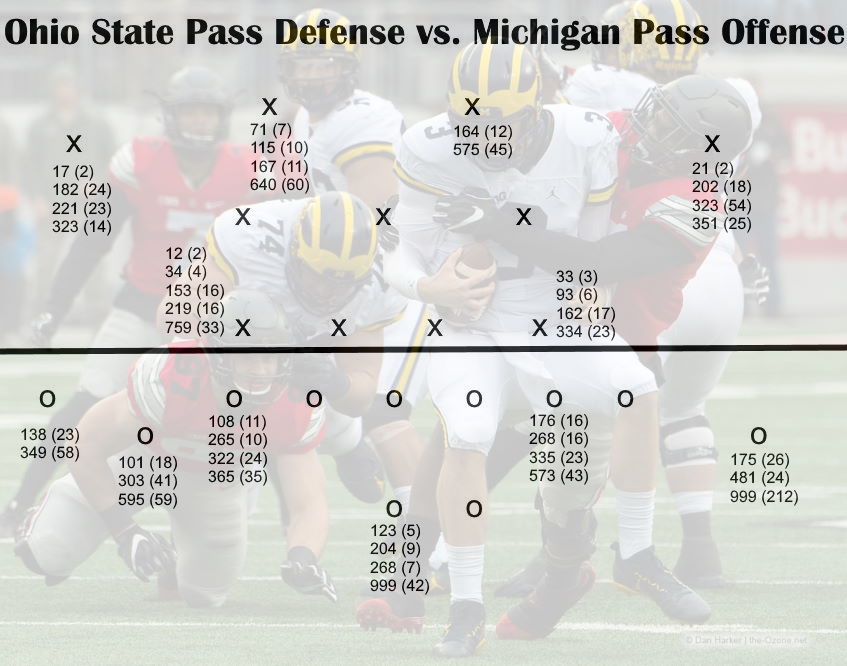 How About Those Quarterbacks

And just as in the chart detailing OSU’s pass offense against UM’s pass defense, these listings aren’t necessarily in order of who is starting. Rather, it’s done in recruiting rankings.

With the Michigan quarterbacks, however, those two things might be the same. The more concerning thing is that each successive quarterback recruit is ranked lower than the next.

That’s not a promising trend, but the good news is that the Wolverines already have 2021 5-star quarterback JJ McCarthy committed. He has actually been committed since May of last year, which may have kept some 2020 quarterbacks from committing. McCarthy is the No. 13 player overall and the No. 2 pro-style quarterback in the 2021 class.

McCarthy is still a year away, however, and Michigan’s offensive fortunes this season will come down to either Dylan McCaffrey, Joe Milton, or Cade McNamara. All are top 10 quarterbacks in their respective class, but they have a combined 46 pass attempts between them.

Meanwhile, the quarterbacks of the Ohio State defense — meaning the safeties — have four players ranked inside the Top 200, including one likely starter in Josh Proctor, who was the No. 71 player in the 2018 recruiting class.

Down On The Corners?

Over the past 25 years or so, doubting Ohio State cornerbacks has been a losing proposition. Looking at the rankings, two numbers jump out — one is Shaun Wade (17/2) and the other is Tyreke Johnson (21/2). Wade will be a first rounder next year, but Johnson is now in his third year and still looking to make his mark.

Wade and Johnson are the only Top 100 players at cornerback for the Buckeyes, but that’s still two more than Michigan has at receiver.

The average overall ranking of the Wolverine receivers is 392, though that number is dragged down by Ronnie Bell’s 999. In other words, their average is over 40 spots lower than Ohio State’s lowest-rated corner.

However, Bell is one of Michigan’s top two receivers and is one of the great scouting jobs by Harbaugh and his staff. But if you remove him from the equation, the receivers still average out at 306.

Out Of The Blocks

Pass defense starts with the pass rush and over the last few years, the Ohio State pass rush has been able to replace Joey Bosa in 2016 and Nick Bosa in 2018. Now they’ll need to replace Chase Young, who was the No. 7 player overall in the 2017 class.

They’ll be doing it with four Top 100 players, including sophomore Zach Harrison, who at one time looked like he was going to end up with Michigan. Harrison had a solid freshman season last year and appears ready to take the traditional next step forward.

Overall, the Buckeye defensive ends’ average rank is 200. That number is brought down a bit by true freshman Ty Hamilton, who is the brother of departed OSU nose tackle DaVon Hamilton. Hamilton himself was the No. 998 player in the 2015 class but ended this past season as the Big Ten’s top nose tackle and appears destined for a possible selection somewhere around the third round of this year’s NFL Draft.

If you take Ty Hamilton’s 759 ranking out of the equation, the average number jumps to 130.

Looking at Michigan’s offensive tackles — some of whom will no doubt play on the interior, their average ranking is 301, which is pretty much dead on with OSU’s defensive ends.

However, as mentioned above, four of those Ohio State defensive ends are Top 100 recruits. None of Michigan’s offensive tackles were. In fact, none of the 20 Michigan players listed above were Top 100 recruits, though some were certainly close.

Seven of the 23 Buckeye defenders listed above were Top 100 recruits.

Michigan has two commitments in the 2021 class and both players should help the pass offense eventually. Quarterback JJ McCarthy was already mentioned, but the Wolverines also have a commitment from in-state offensive lineman Giovanni El-Hadi, who is the No. 71 player overall and the No. 10 offensive tackle in the class.

We know that Michigan has plenty of catching up to do overall, but that is also the case when it comes to the 2021 recruiting class.

The Buckeyes currently have 14 commitments, including five players who would fit into this pass defense discussion.

Overall, the Michigan passing game and the Ohio State pass defense aren’t too many miles apart, but this area might be the biggest mystery for both of these teams heading into 2020.

Up next, we’ll look at the running games, where things don’t need to be a mile apart when it only takes an inch to pick up a first down.