As we all predicted, Urban’s first game from the sideline was a one-sided affair.

Ohio State came out fast and strong against Tulane, boosting stats and scoring 42 points in the first half without appearing to break much of a sweat. Once a comfortable lead was established, the Buckeyes essentially took a foot off the gas. They offered playing time to dozens of second and third team players, and cruised to a spread-covering victory (thanks to one final second half score).

As with each week, here are a few places that I did well in my week four projections… and a few that I missed on pretty badly.

The less than good stat projections:

Nothing says “classic Big Ten football,” like a battle of the top two scoring offenses in the nation. Alas, that’s where we are when the Buckeyes make the trip to State College to take on the Nittany Lions. The Lions are averaging 55 points per contest, while the Bucks are sporting a measly 54.5.

Trace McSorley, Penn State’s popular, gun-slinging quarterback, has thrown for just under 800 yards and eight touchdowns this year. On the other side of his passing nature, he’s thrown a couple of picks and has a lower completion percentage than all other non-freshmen starting QBs in the league. That’s simply who he is, in my opinion. He’ll make big plays and has the talent to do so, but he’ll also try to push the ball into spaces that don’t exist.

Behind McSorley, junior tailback Miles Sanders is averaging seven (!) yards per carry on the year and is coming off of a 200-yard day against Illinois. Like OSU, the Nittany Lion defense has given up points to inferior teams, but also has the ability to get stops behind the line.

I expect a tight game, especially given the conditions inside of Happy Valley (darn white outs). Both offenses will move the ball, but I believe it’s the consistency of Ohio State’s passing attack that makes the difference. The Buckeyes get back to their winning ways in PA and maintain an undefeated record. 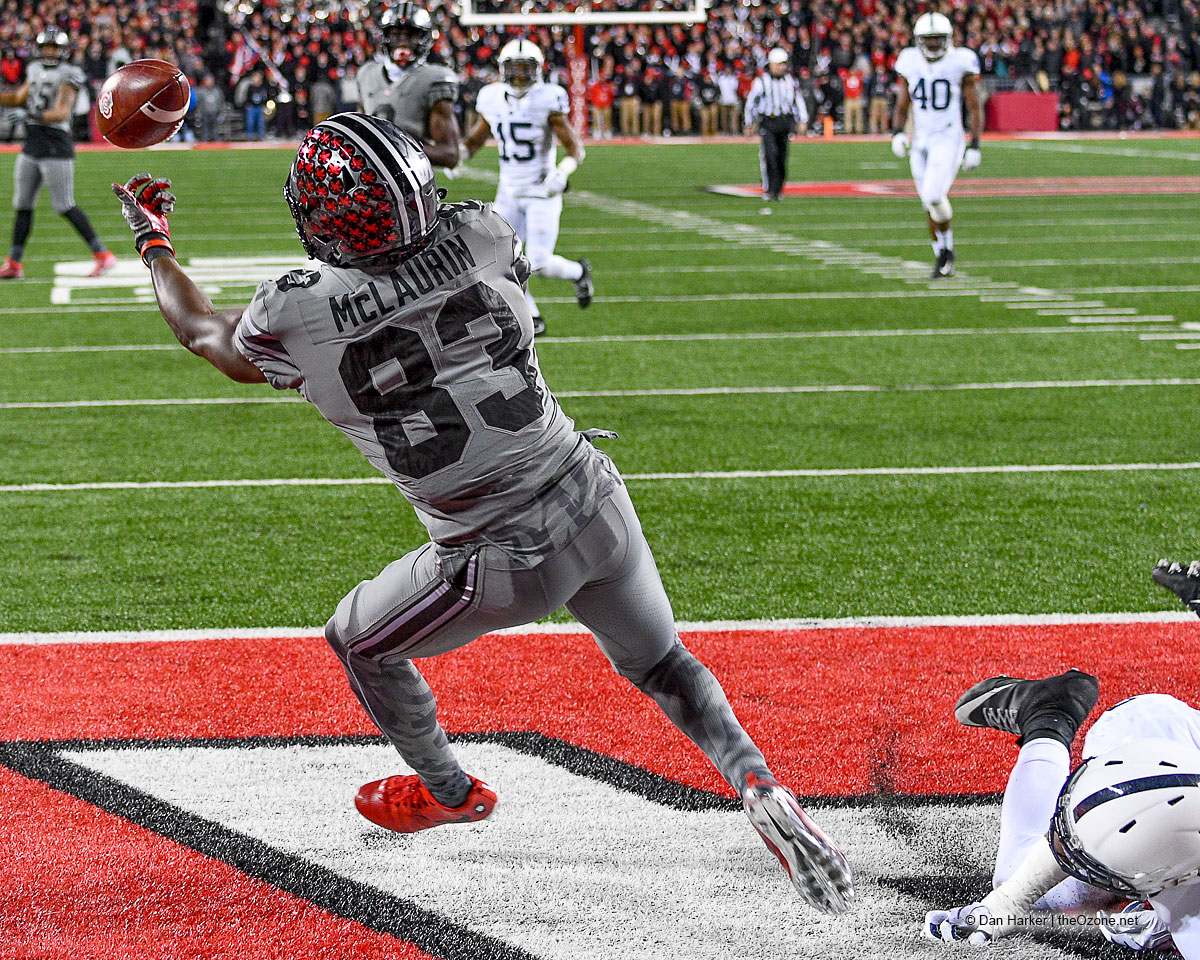 You’re probably getting bored hearing it (no, you’re not), but Dwayne Haskins is really good at football. At this point, he has a command of the passing game that I’m not sure we’ve seen in at least 20 years at OSU. He’s completing over 75% of his passes and avoiding turnovers.

Penn State has the ability to bring pressure and will likely be the best defense that the Buckeyes have faced this season. Yet, I’m confident that Haskins, especially when playing an entire game (except for some potential designed Tate Martell plays), will continue his impressive stretch.

Haskins has completed at least 20 passes in each contest that he’s started, and that will continue Saturday night. A deflected pass will result in an interception, but he’ll also add three more TD passes to his resume, break 300 yards, and complete just under 70% of his throws.

The big wrinkle that I’m throwing into this game is that Tate Martell will see some time on the field in a couple of designed runs. Urban and Ryan Day also get tricky in this one, lining Martell up for another obvious run, but having him fake the run and complete a short pass to tight end Rashod Berry for a score. Sure, it’s a projection Hail Mary, but if it hits, feel free to load me up with your money and send me to Vegas.

Mike Weber left the Tulane game with a limp and a lot of questions from the Buckeye faithful. As the week progresses, we may get more information regarding his injury. I’m running with the fact that I expect him to see some playing time against PSU. With that said, I’m tempering my expectations a bit, only giving him 10 carries, but for an impressive 51 yards, given the potential set back.

It’s J.K. Dobbins that stands out in this one, garnering a season-high 25 carries and two receptions. I think that, without the trusty legs of J.T. Barrett this season, Urban will allow Haskins to throw, but will also get Dobbins the ball frequently. Though he’ll plow forward in short-yardage situations, he’ll also eat up chunks of yardage as OSU’s passing opens lanes for him throughout the game. I look for Dobbins to break 100 yards and get into the end zone at least once.

K.J. Hill, Parris Campbell, and Austin Mack have begun to separate themselves from the Zone 6 pack in terms of Dwayne Haskins’ favorite targets. Johnnie Dixon and Terry McLaurin are close behind, but tend to be home run hitters in the passing game. I will roll with that philosophy and assign Hill, Campbell and Mack the bulk of the receptions.

Hill remains a consistent target and exits Happy Valley with a score and as the leading receiver in the game. Similarly, Campbell, as is his style, offers a couple of intermediate gains and a long TD score. McLaurin finds a gap in the secondary and pulls in a 15-20 yard touchdown reception and another long, chain-moving grab. And, last but not least, Rashod Berry snags the aforementioned Tate Martell toss for a short scoring grab.

The defense bends but doesn’t break, giving up four touchdowns but also getting three takeaways from the Nittany Lion offense. Pete Werner knocks a ball loose just past the line of scrimmage, with Dre’Mont Jones hauling it in. Jordan Fuller and Kendall Sheffield each rob a McSorley pass and steal the ball back for the Buckeye offense.

Once again, I’m going heavy on the linebackers. My hope is that the rush attack of Penn State forces them into their best game of the year. Even without Nick Bosa, the Silver Bullets get four sacks and an additional five tackles for loss. Penn State moves the ball, but the Bucks get enough stops to leave with the win. 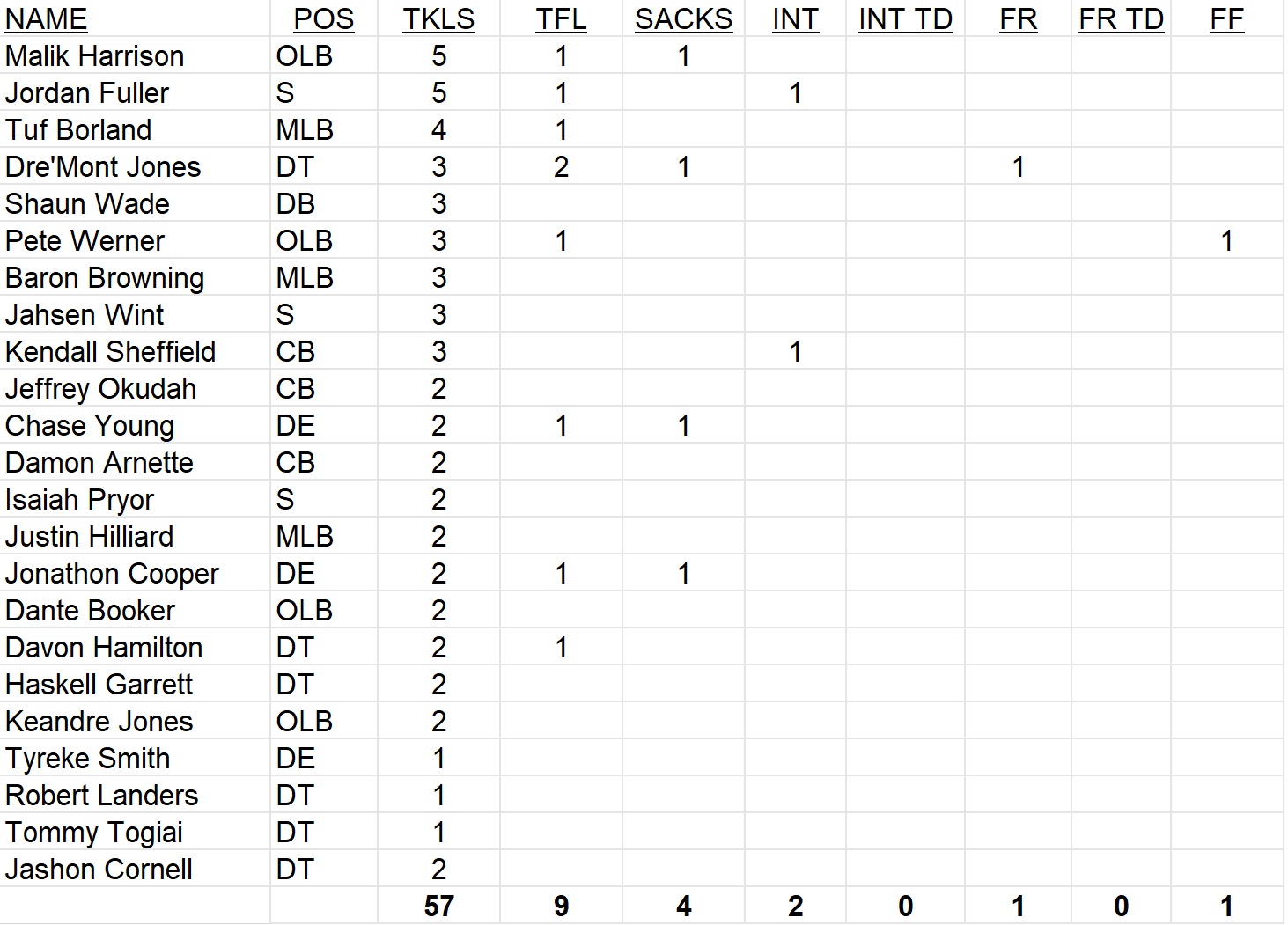 A rushing score from Dobbins, a passing TD from Martell, three more touchdown passes from Haskins, and a clutch field goal give Sean Nuernberger eight more points and inch him closer to the school’s all-time scoring record.

This battle of Big Ten titans ends with a Buckeye victory. They escape Happy Valley and look ahead to a home matchup against Indiana.

But, Adam, you say, didn’t you originally predict Ohio State to lose to Penn State back in the Hayes & Cannon Predict the Big Ten East article? Well, yes, detective, I did. But if Rocky can change in Rocky IV, and the US and Russia can change, then I can too.