The 2019 college football season is an off-year regarding rule changes, at least regarding game play. When it comes to player health and safety, however, rules are constantly up for review.

Five new rules have been implemented this season, and all five are safety related.

Tweaks to the targeting rule is the most significant change, but that’s not the only change.

Blocking below the waist is also now outlawed for the defense just as it is for the offense.

The final non-targeting change involves overtime. When a game gets to the fifth overtime, the ball will move from the 25-yard line to the 3-yard line and each offense will have one down to score a 2-point conversion. Each successive overtime will proceed in this manner as long as necessary to determine a winner.

But now let’s get to targeting, which is defined below. 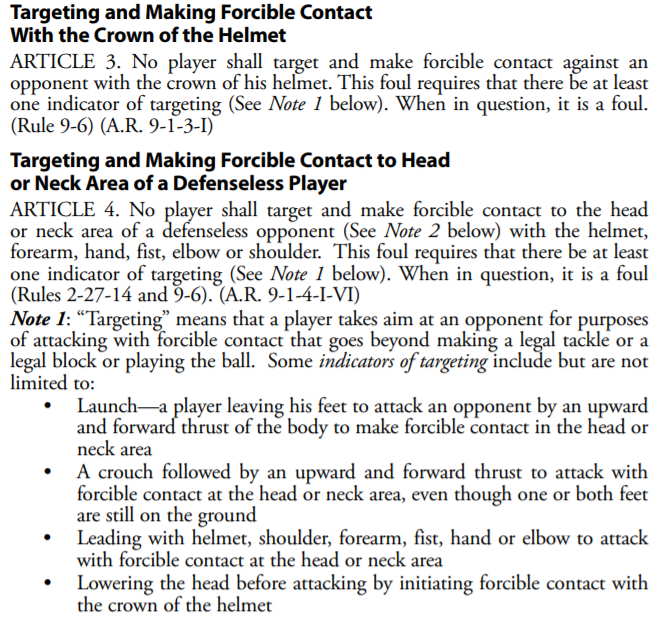 The first major change with targeting is that when it goes to review, the play can no longer “stand.” It must be confirmed. If it does not get confirmed, there will be no penalty.

“All elements of targeting have to be confirmed, meaning that there won’t be a stance — ruling on the field last year, if we weren’t sure, the play would stand, and that player would be disqualified,” Bill Carollo, the Big Ten Coordinator of Football Officials said last week at Big Ten Media Days.

“This year, all elements have to be confirmed. If not, the player stays in the game. That might be about 10 percent of plays last year, based on the numbers last year, we’ll have 10 percent possibly less targeting calls this year. And here’s the idea behind it and the thinking and the rationale. We want to get this play correct. It’s a very important play as far as health and safety, but it’s also the penalty is our largest penalty, so we want to make sure that we get that correct, and if we aren’t sure, the player will stay in the game.”

In addition, if a player commits three targeting calls in a season, he will be suspended for one full additional game.

With such significant penalties for targeting, Carollo has long been asking the officials in the Big Ten to either confirm or overturn targeting calls. Last year, his official had zero “stands” calls on targeting, meaning they confirmed or denied, and now this rule goes nationwide.

But fans, coaches, and players probably shouldn’t expect everything to be fixed, because even with the rules and demands put in place, targeting is still often in the eye of the beholder.

“We spend probably most of my time on targeting, and they’re our toughest calls, and I always take them to meetings with our coaches, we vote on it and we don’t get 14-0 that’s targeting or not targeting,” Carollo explained. “It’s split a lot of times 7-7 what they’re looking for. There’s a lot of gray area in this area. It has to have some indicators. They have to launch. They have to thrust upward. They have to attack.

“They have to use the crown of their helmet or hit a defenseless player above the shoulders. Those are the basic — that’s black and white. That’s pretty easy to understand. But it’s got to be forcible contact in an attacking manner that’s more than just playing the ball, making a tackle, making a block. So it has to be more than that.”

In the past, the officials were told to lean towards targeting. If they weren’t sure, then it was a penalty. That same order of march continues for the referees on the field, but Carollo wants the replay officials then to clean up the targeting calls that didn’t need to be made.

He is essentially asking the on-field officials to be okay with being wrong and being corrected, and he is also putting pressure on the replay officials to make a call using all of the available angles that they have.

“When we aren’t sure, the rule said we threw the flag on the field, the rule said the call is going to stand unless you can overturn it beyond all doubt, okay,” he said. “So if we don’t have the right angle, we aren’t really sure, ‘is that enough force,’ we’d say the play stands, and we’d go with the call on the field, which is the right answer. We had too many marginal calls, too many ticky-tack fouls, too many on the margin, just on the edge that, ‘boy, they could have passed on that.’ Well, we’re going to get rid of that. Now it’s going to be tougher for my officials, especially in replay. Either it is or it isn’t, and I think that’s important. So we might have a few less. We’re not backing away from it.

“We tell the guys, when in doubt, throw the flag. Replay has technology, excellent technology, slow motion, just like you have at your homes or during the game. You can see it. So you talk about transparency, there’s clearly — everyone sees it immediately. You see it before my officials see it. But we tell the officials, throw the flag, replay, your job to fix it.”