The Buckeye football season is nearly upon us, so I’ve finally decided to come out from hiding to start throwing around my crazy statistical predictions.

Since it’s been roughly an eternity since my last prediction post, and I’m undoubtedly a bit rusty, it’s probably best to begin with something easy. Without further ado, here are my thoughts on the exact statistics of each designated pass catcher within the Ohio State offense.

A lot (read: A LOT) of wide receiver production walked out of The Shoe and into the NFL after last season. Johnnie Dixon (who the internet thinks is a 30-year old Canadian defensive back), Terry McLaurin, and Parris Campbell combined for over 2,400 yards receiving last year.

For a quick reference, remember that time Craig Krenzel and company won a national championship? Well, the three guys above combined for more receiving yards last year than everyone on the 2002 team combined. Yea, sure… attempts… offensive scheme… Dwayne Haskins… yada yada… point is, they caught a lot of balls and they’re no longer on the roster.

So who will be catching airborne, prolate spheroids this year for the Buckeyes? I’m glad you asked…

At the WR-X spot, Binjimen Victor is ready to either explode onto the scene and show us all of his remarkable potential or battle issues with inconsistency and put up mediocre numbers, depending on who you ask. With Austin Mack now at a different wide receiver position, Victor will have an opportunity to make an impact right away.

Justin Fields may not have Dwayne Haskins’ accuracy with the football, as not many humans do, but that’s where someone like Victor can come in handy. His catch radius is absolutely ridiculous. Being able to go up for a jump ball or snag a slightly off-target pass might be the saving grace that a new QB needs. OSU will also look to utilize Victor in the deep-ball game, given what was just shared about his ability to track and bring down the ball, so be prepared to see him on some highlight clips this season. 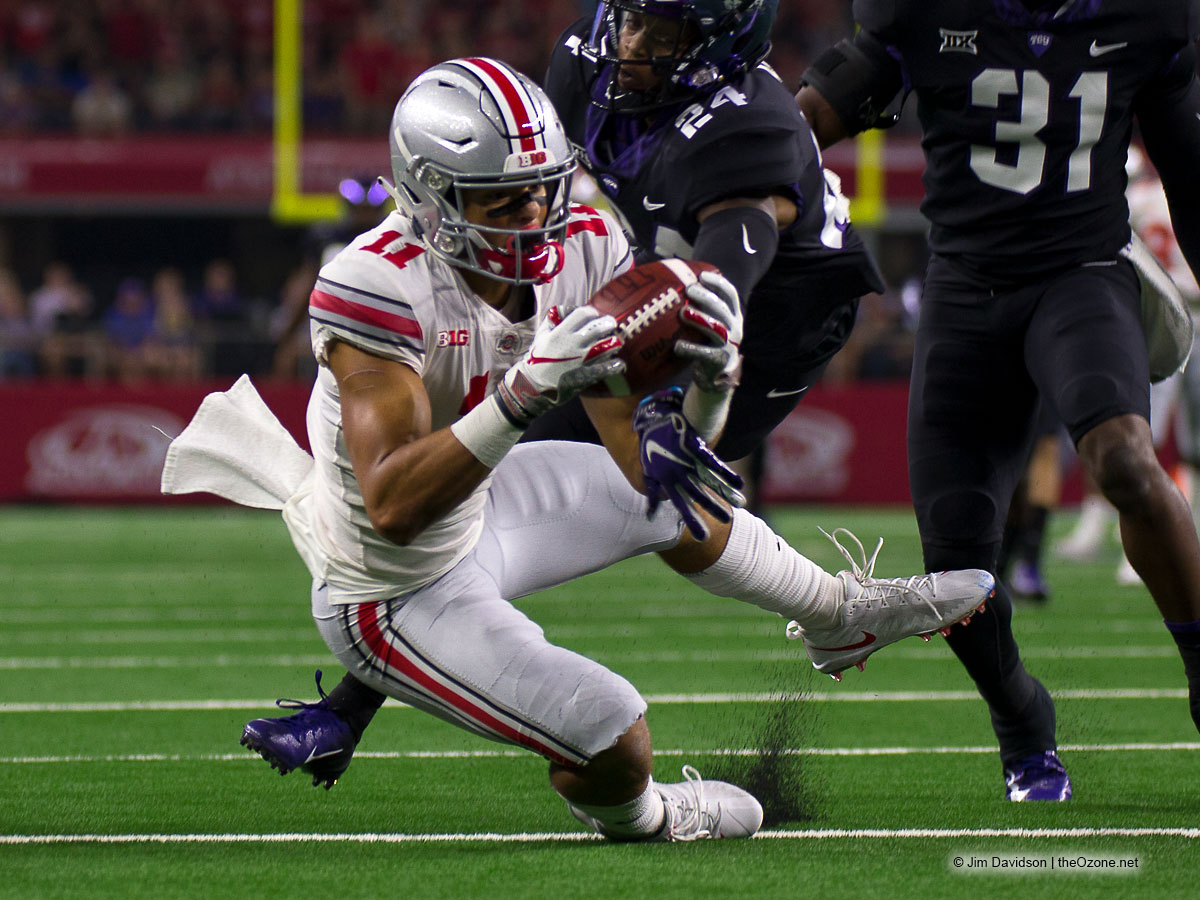 With Victor holding down the X spot, look for Austin Mack to occupy the WR-Z position and become an immediate favorite for Fields. After Mack’s injury last year, there could have been speculation about his status heading into 2019. The talent in the WR room is immense, and an injury can derail someone’s efforts to stay on the field. That doesn’t seem to be the case for Mack, as Brian Hartline made it clear that he’s one of the top three options in the receiving game and a must-have in the starting lineup.

Look for Mack to get his number called early and often by the OSU offense and Justin Fields. His route-running ability and fearlessness in traffic can serve as an excellent security blanket and confidence builder.

At H-back, in K.J. Hill, the Buckeyes have perhaps their most dangerous and improved offensive player. He may not have Parris Campbell speed, because, well… who does?… but he’s a very good route runner and has some of the best hands on the team.

No matter where he lines up, there’s a good chance that Hill is the best wide receiver option on the roster. I look for him to not only make big plays out of the backfield (a la Penn State last year), but to wreak havoc on defenses on short/intermediate routes across the middle where he and Campbell also thrived last year. The combination of Fields out of the pocket, drawing linebacker/safety attention, and Hill open in the middle should be a scary one for all opposing defenses.

Luke Farrell appears to have a firm grasp on the starting tight end job, as he aims to improve upon his solid 2018 campaign. Having Rashod Berry and Jeremy Ruckert waiting just below him on the depth chart should push and challenge Farrell.

With so much internal competition likely to continue throughout the year, it’s difficult to know and predict exactly where our backups stand. But, hey, that’s what I signed up for when I started this article, so here are my thoughts.

Jaylen Harris and true freshman Garrett Wilson appear set to battle it out for WR-X backup duties. Harris has been with the team for three full offseasons, giving him a leg up in that regard. On top of that, his body style is very similar to the current X starter, Binjimen Victor, in that both are 6’4″+ and very lean.

Garrett Wilson, a Lake Travis product, comes to Ohio State with a tremendous amount of hype and talent. Though five inches shorter than Harris, Wilson seems to have no issues going up and making a play. Many have stated that Wilson will be a three-year player at OSU before becoming an inevitable high draft pick in the NFL. Likely my boldest prediction within this group, I think Wilson’s talent emerges early and OSU inserts him into the offense very frequently in the 2019 season. 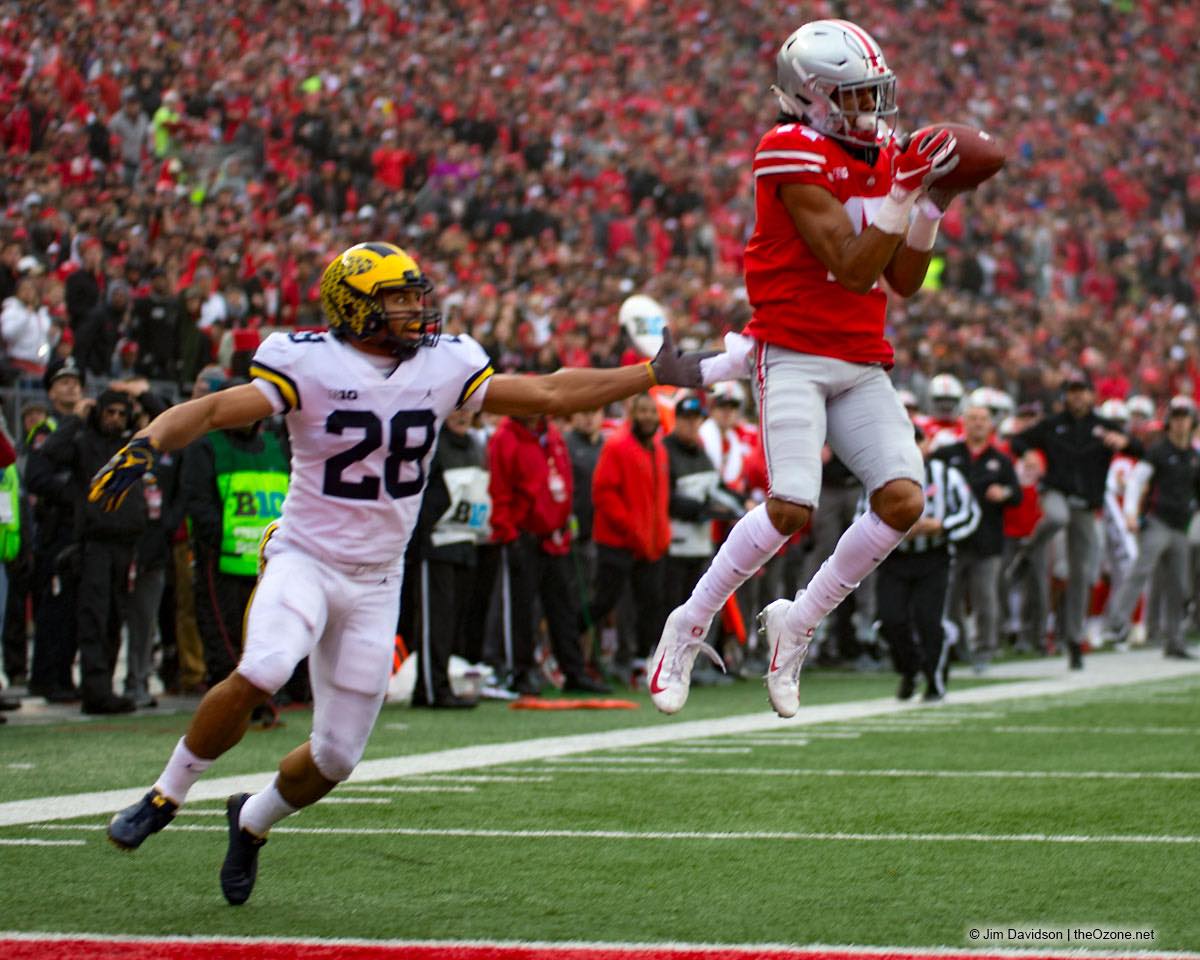 The WR-Z role, now held by Austin Mack, will also see a significant amount of backup work. Chris Olave made himself known in The Game last year, shining multiple times on the biggest stage. Though Mack will be the workhorse at this role, Olave will shine in his moments on the field and set himself up for a huge role in the 2020 offense.

In the backup slot position is former walk-on C.J. Saunders. Saunders has had a good amount of success in his time on the field since 2017 and will look to have an even bigger impact as Hill’s backup in the H-Back position. I believe Saunders will see a lot of time early, but will also cede snaps throughout the year. Picking up those snaps will be Jaelen Gill, another talented, local pass catcher/runner.

At tight end, you have two very talented guys fighting for the backup job behind Luke Farrell. Rashod Berry was the backup last season and showed flashes of big play ability.

Jeremy Ruckert, a phenom from New York, got onto the field a few times in 2018. He looks to show his pass-catching skill set whenever possible, but I still think he sits and learns behind Farrell and Berry for most of the 2019 campaign. 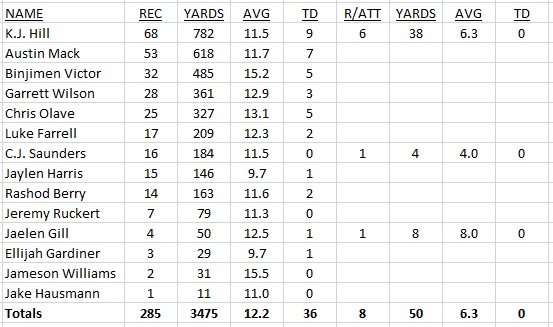 That was a fun exercise in mildly-educated, impossible guesswork. Now I’ll just sit back and see how many different ways one person can be wrong.