Due to a rash of injuries up front, the Buckeyes will be starting a different defensive line than the week prior for the third-consecutive week.

Last Saturday against Indiana, it was Chase Young, Davon Hamilton, Jashon Cornell, and Tyreke Smith getting the start, but now with the news that Smith is out this week, he will be replaced by sophomore defensive end Tyler Friday or true freshman Zach Harrison.

Ohio State’s official depth chart this week lists the starting defensive end opposite Chase Young as Friday OR Harrison. Expect it to be Friday, but Harrison does continue to impress the coaches on a daily basis in practice. He also notched his first career sack in last week’s 51-10 win over the Hoosiers.

With nose tackle Robert Landers out, sophomore Tommy Togiai moves up a spot behind Hamilton and should see more action this week. Togiai has been said to be a combination of Landers and Hamilton, so he should have no problems getting the job done on Saturday.

At linebacker, in his second week back from injury, senior Justin Hilliard is now listed as Pete Werner’s backup at Sam. Previously, that was sophomore K’Vaughan Pope, but he is now listed at Will behind senior Malik Harrison and sophomore Teradja Mitchell.

Pope is versatile enough to play any of the three linebacker spots for the Buckeyes and provides valuable depth.

Sophomore cornerback Cameron Brown is still listed on the depth chart behind Damon Arnette even though he is a game-time decision. If he can’t go, expect to see redshirt freshman Tyreke Johnson or juniors Amir Riep or Marcus Williamson in his place. This could be a great opportunity for Johnson to make his first mark on the field for the Buckeyes.

Junior Jahsen Wint returns to the lineup at Bullet behind Brendon White this week.

Offensively, nothing has changed for the Buckeyes.

Given the opponent, this could be one of those games where a backup makes a statement with some second-half opportunities and earns more first-half run.

Redshirt freshman H-back Jaelen Gill was a topic of discussion on Thursday with Ryan Day and Day said that Gill is getting opportunities in practice to show what he can do and those opportunities should get him more snaps during games.

As such, Gill could be one to watch tomorrow. 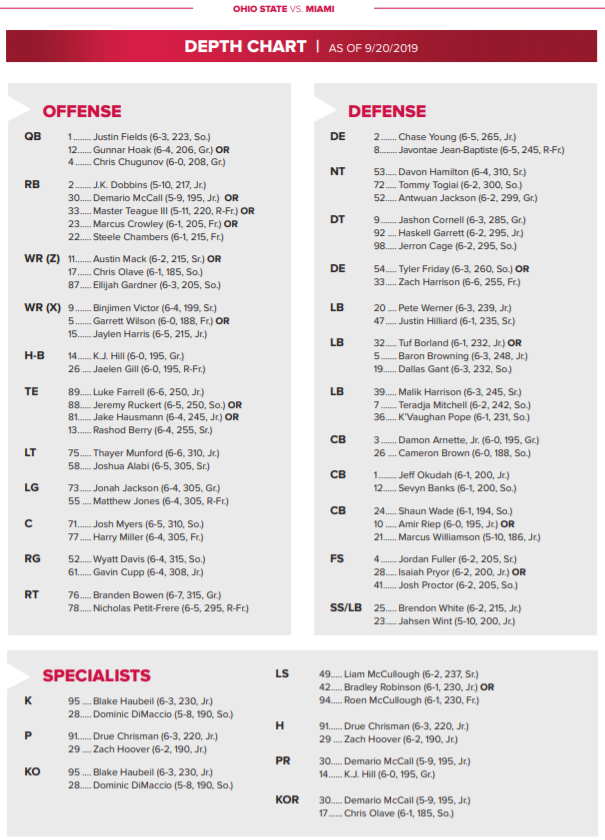