Not a lot of sense wasting time on last week’s statistical recap. I was accurate on a couple of predictions, but undervalued the offense and it showed in the overall yardage. When you rush for over seven yards per carry and better than 300 yards, overshooting the passing yardage is possible. I did just that.

I hit on another Justin Fields rushing TD, two J.K. Dobbins scores, and a Chris Olave touchdown on three catches for the day. Damon Arnette Jr. also made me look good by allowing my predicted defensive TD to come to fruition.

Chrisman punted one less time than expected, but still hit two inside of the 20, as noted. Haubeil knocked in exactly seven kicks, they just all happened to be PATs instead of six PATs and a FG like I had written.

In short, I had the Buckeyes clobbering the Hoosiers by 25 with no chance of an upset. Ohio State took that a step further, demolishing Indiana by 41 after taking their foot off of the gas for an entire quarter.

The RedHawks led against Cincinnati last week for almost the entire first half. After the first quarter, however, they did nothing impressive whatsoever on the football field. In the end, the Bearcats beat their nearby rival by 22 points, winning 35-13. Those same Bearcats, you’ll recall, were demolished 42-0 by Ohio State the week prior.

What I’m trying to say is, Justin Fields will have another great day, and I expect Chris Chugunov and Gunnar Hoak to see the field yet again. Fields continues to rush for TDs on the regular, so until that stops, go ahead and plan on that tally being in my count every Saturday. He’ll also toss another four touchdowns and break the 200-yard mark on over 75% passing. 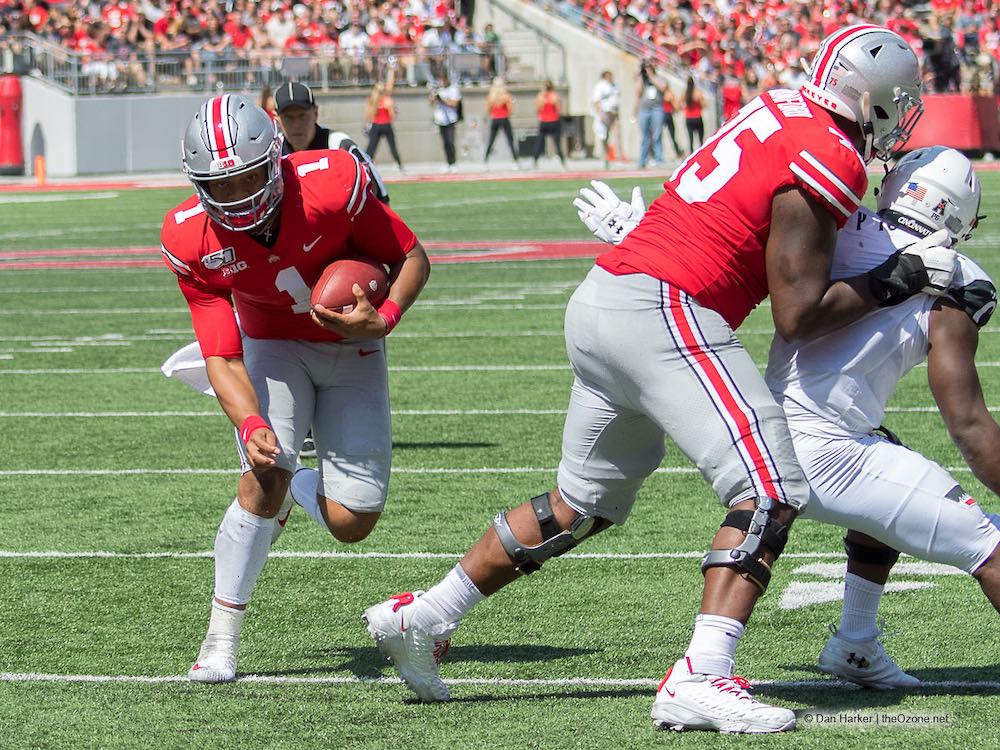 Ryan Day has his QBs completing over 70% of their throws this year, and I see no reason for that to change on Saturday. This offense is running at a remarkably efficient level right now, and has shown no signs of slowing down.

J.K. Dobbins scoffed at my mere 119-yard prediction last week and had his way with the Hoosier defense. The RedHawks of Miami are currently giving up even more yardage on the ground than Indiana, so I expect another day of smooth sailing for the Buckeye O-line and running attack.

With that in mind, I believe that the rushing push is easy enough work that we won’t see Dobbins get 20 touches, instead letting everyone have a chance in the backfield. Master Teague III will again see the bulk of the secondary RB carries, plowing ahead for another 71 yards and a score. Behind him, McCall and Chambers will rush a few times, but it will be Marcus Crowley getting into the end zone for his first career OSU TD.

Talented, deep position groups are awful… for me… when it comes to predicting how they’ll perform on a weekly basis. These groups, such as the WRs and TEs for the Buckeyes, are not awful for Justin Fields. He continues to spread the ball to his receiving targets, having three different receivers in the top 16 in receptions in the conference. Michigan, for reference, has zero in that mix. That’s not necessarily relevant, yet it’s always worth noting.

The three leading WRs will again top the reception stats in this matchup, as Hill, Victor and Olave will all register at least three catches each and 150+ yards among them. I have Olave and Victor reaching the end zone and freshman Garrett Wilson making an appearance in the painted area as well. Rounding out the TD catches will be Jeremy Ruckert who currently has a monopoly on tight end receptions for the 2019 Bucks (though I do have Rashod Berry earning a catch in this contest).

Blake Haubeil connects on each of eight PATs. Drue Chrisman is only called upon twice in the punting game. He drops one inside of the 20 and blasts the other 55 yards for a very small return.

After pitching a shut out in the first half, Miami registers a score late in the third quarter. Otherwise, it’s a quiet day for the RedHawks.

Ryan Day’s Buckeyes move to 4-0 as OSU heads to Lincoln, Nebraska for a night game against the Huskers.