So if you’ll recall from last week’s statistical recap, I thought that OSU would score a lot of points (56, to be exact). Ryan Day and company thought that was hilarious and tacked on an extra 20 for good measure.

I predicted that Justin Fields would throw for 213 yards, 4 TDs, 0 INTs, and rush for another score. He had the audacity to toss in an extra ten yards passing and an additional rushing score to my tallies. I had every one of the three QBs that we know taking snaps, and that also came to fruition, but they were much more active and impressive than I had given them credit for.

The running backs individually did not do me many favors with their stats, but cumulatively made me look good. I projected 38 carries for 233 yards and they totaled 227 on 42. Similarly, I had five running backs earning carries in this one, but Ryan Day even got walk-on Amari McMahon into the mix, tossing a carry to a sixth Buckeye RB.

In the receiving game, I nailed TD catches for Garrett Wilson, Chris Olave (because, obviously), and Binjimen Victor. Outside of that, I didn’t get a whole lot correct. For the special teamers, Blake Haubeil hit all of his extra points and Chrisman punted twice, as predicted. Nothing else to see there, folks.

The Buckeyes scored 76. I accounted for 56. I had some decent projections, but swung and missed on the scoring. 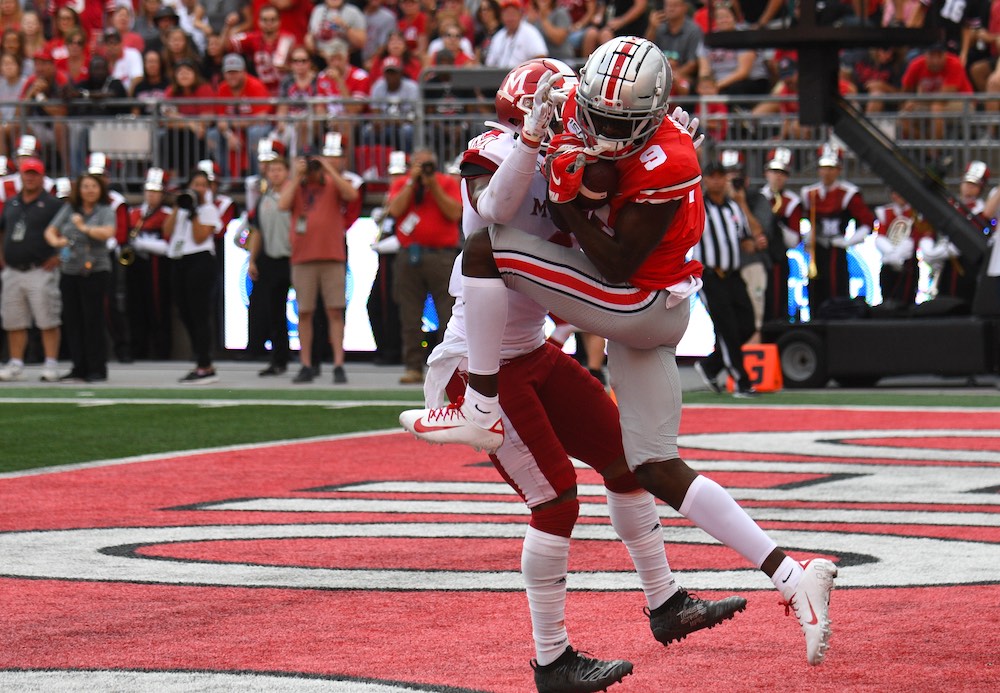 The only QB that you’re likely to see for OSU on Saturday is Justin Fields. And, as you’ve come to expect, he’s going to play well. I have him tossing his first interception (seriously… in week 5) to the Husker defense, but otherwise playing extremely well.

He’ll attempt just north of 30 passes, complete around 70% of them, and toss another three touchdowns. Oh, and because it’s kind of his thing, he’ll run for a score as well.

J.K. Dobbins is the thorn in the side of the Nebraska defense this week. He’ll rack up roughly 24 carries and make the most of them. Dobbins will reach the paint twice, average nearly seven yards per carry, and end with over 160 yards on the ground and another 11 through the air.

Master Teague and Demario McCall will get into the stat columns, but won’t have nearly the impact as they’ve been able to produce in recent weeks. Teague will average just under five yards per touch, but neither backup back will score.

When in doubt, go with the big three in the receiving game.

Chris Olave, Binjimen Victor and K.J. Hill have separated themselves from the pack for Buckeye pass catchers, so they’re at the top of my list for this weekend once again. Each will have a receiving score and put up over 50 yards receiving.

After them, Austin Mack, Jeremy Ruckert, and Garrett Wilson will steal the remaining completions (Dobbins too), keeping this week’s pass grouping somewhat tighter than normal.

Despite my prediction of a loss in Lincoln prior to the season, I’ve changed my tune after seeing the first four weeks. The Buckeyes give up 24, but still manage to come out of Husker territory with a three-touchdown victory.