Let me just say that Mountain Time is pretty excellent for old timers like myself when it comes to night football games. They wrap up right around my senior citizen bedtime and that makes me happy. On the other hand, when you’re meeting a good friend in Colorado and have a few local beverages the night before, a noon game (now all of the sudden a 10 am kickoff) makes for a rough showing.

Luckily, I wasn’t on the field, just in a near-Boulder sports bar nursing a coffee and a little hair of the dog simultaneously. Like me, the Buckeyes were a bit shaky at first, but they eventually came around and crushed the Badgers.

The Buckeyes didn’t quite hit my score of 41, instead finishing with 38, but made up for that by holding Wisconsin to 13 fewer points than I’d projected.

The game was a good one. The stat projections, errr, well… let’s move on to Maryland! 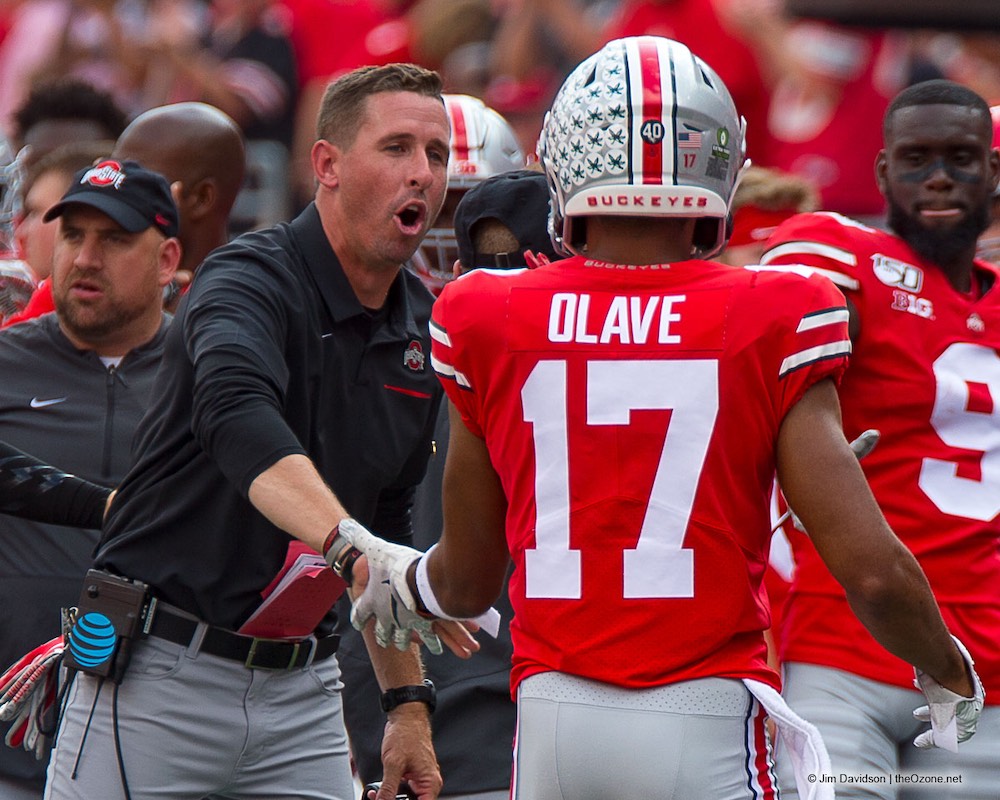 The Buckeyes found themselves perched atop the College Football Playoff rankings on their release last week. This is not good news for Maryland. What that essentially translates to is this: “A group of people are looking for any excuse to remove OSU from that ranking, whether it be a loss or simply a poor showing.”

Ryan Day does not want to give those people that chance. Thus, Justin Fields will be prepared to dominate on Saturday against the Terps and he’ll do just that. Fields will throw for just over 250 yards and 3 TDs and will rush for another score. He’ll be convincing enough that Chris Chugunov will see more game action, beginning fairly early in the 4th quarter. We’ll also see a decrease in the number of designed runs for Fields as the Bucks move into protection mode for the QB for the next two weeks.

Enter, J.K. Dobbins and company. Dobbins will pick up where he left off against a much stronger Badger defense. He’ll rush for 161 yards and 2 scores before passing the torch to Master Teague III for the afternoon. Teague will hardly miss a beat, scoring his own TD and paving the way for even more Buckeye backs to get carries. In total, 4 running backs will tote the rock, 3 of which will also make it into the endzone.

OSU surpasses its season average (284) on the day, rushing for 307 yards and 4 scores. I wanted to make a Gettysburg Address joke there, but I’ll refrain. You’re welcome.

Blake Haubeil gets his name called several times on Saturday, knocking in 8 extra points and rocking a solid, healthy beard.

Drue Chrisman is only needed thrice and booms them to the tune of just over 42 yards per punt. And, as was alluded to in Tony’s Two-Minute Drill, hopefully we don’t see any more breakdowns in punt protection and punting itself.

The Buckeyes go into Saturday as the best team in the country. They will end the game will that same distinction.

Later in the day, some folks may decide to change that, depending on the outcome of a certain 3:30 pm game. But, the little number beside the school name doesn’t matter just yet. OSU stays undefeated and very much in the playoff grouping after a tremendous showing against Maryland.