Alright, so here’s what happened… the weekly projection write-up made it out just prior to kickoff but I didn’t get a chance to shoot it out to many of you. For a lot of reasons, that’s more than ok. It was Ohio State versus Rutgers. Any and all score predictions were basically just us throwing a really big number out there on one side and a really small number on the other.

As it turns out, most people were off in their projections of this game and it doesn’t matter anyway. The Bucks won by a lot, as we all knew they would. In fact, I attended a mid-season wedding reception with no worries whatsoever about the game… and I crushed it like Frank the Tank.

Like normal, I had a couple of predictions that were close, but had many (many) others that fell flat. 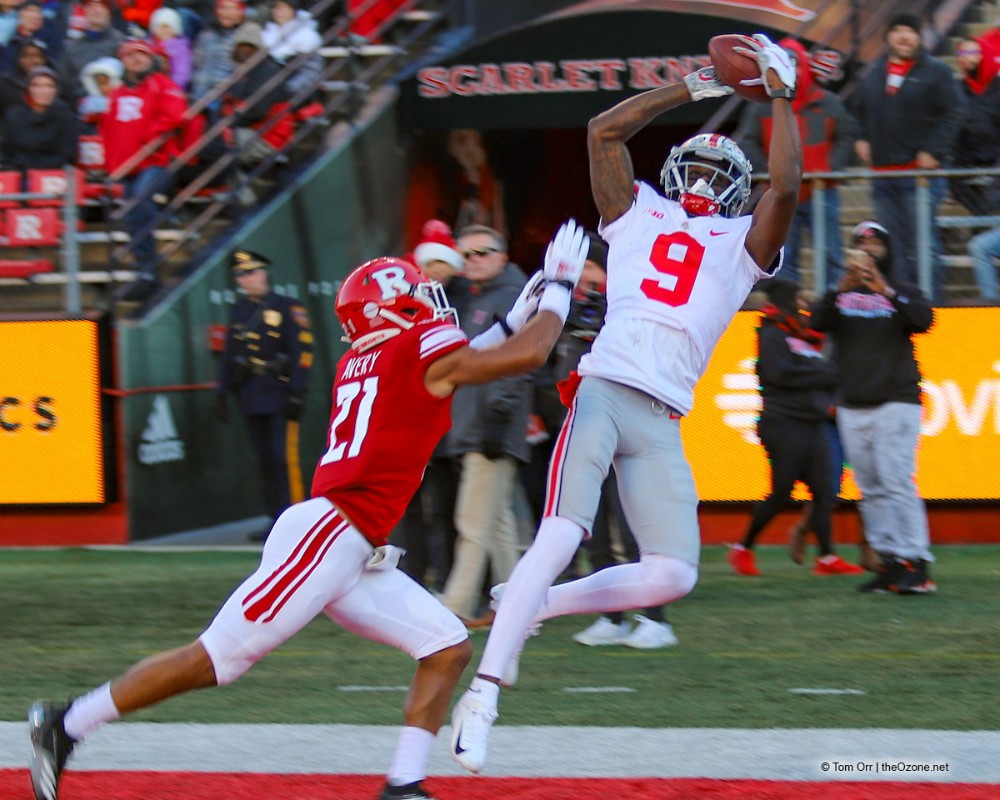 Those combined 49 completions, 710 yards, 4 TDs and no INTs (also an 80% completion percentage) belong to college football legends Tanner Morgan and Peyton Ramsey against the vaunted Penn State defense in their other two November outings this year. So, yea, let’s do this.

By most accounts, Justin Fields is a decent quarterback. I don’t think it’s a stretch to say he’s even on par with the two aforementioned QBs that made the Penn State secondary look like a bunch of Alan Bosleys in Remember the Titans (Yup, I got the Disney+ trial). With the intense focus that Day and company have put on each of the next five games, I would prepare yourself for a Heisman-esque performance from the Buckeyes’ offensive leader.

Fields will be armed with an air-tight gameplan and execute to near perfection. He’ll throw for just under 300 yards, completing 20 throws, and tossing 4 touchdowns. In addition, he’ll use his legs to keep the Nittany Lion defense on their toes, going in for a score in the run game as well. Justin Fields has already had a tremendous first year as a Buckeye, but this game takes it to another level.

J.K. Dobbins, no slouch in the run game, will muscle his way to over 5 yards per carry in this contest. Day will lean on him for much of the day, only spelling him with Master Teague III periodically in the second half once the lead is comfortable.

I look for Dobbins to get into the endzone twice, both on fairly short carries from inside the 10-yard line. Though Teague doesn’t score and his stat line doesn’t appear overly impressive, it’ll be his ability to keep the chains moving in the 4th quarter that ultimately winds out the clock.

As if that weren’t enough, I think Dobbins matches his season high (Northwestern/Wisconsin) and snags 3 catches out of the backfield.

Feel the rhythm, feel the rhyme, get on up, it’s pass catcher time! (Seriously, the 7-day trial is almost over, apologies)

Blake Haubeil racks up 10 points on 7 PATs and another beautiful field goal.

Drue Chrisman gets back to his blasting ways, knocking 5 punts a total of 206 yards, for a 41.2 yard average and very little, if any, return yardage.

Ryan Day’s Buckeyes look possessed in this game. They come out firing and jump out to an early lead (which of course is lengthened in the magical 2nd quarter). They give up a couple of scores to James Franklin’s team, including a long TD catch and run, but ultimately run out the clock in this game with little challenge from their “rival” to the east.

*Since I no longer do the defensive stat predictions, I’ll simply say that Chase Young has himself a day. Obviously inspired and still unblockable, he makes his presence known. He’ll plant himself in the Nittany Lion backfield from the first series until he’s replaced with the lead in hand.*