Starting Buckeye point guard CJ Walker was ill and a game-time decision. He came off the bench in favor of freshman DJ Carton, who scored 14 points on 6-of-15 shooting.

OSU opened with a 6-0 lead on the back of three-pointers from Kaleb and Andre Wesson, and they didn’t lose the lead until a Serrel Smith three-pointer made it 12-11 with 9:57 to play in the first half.

The Buckeyes got the lead back a minute later thanks to a layup from Andre Wesson, but following a Justin Ahrens turnover, Darryl Morsell hit a three to recapture the lead at 15-13 with 7:53 remaining. That would be the last lead change of the game.

Consecutive layups from DJ Carton cut the lead to two points twice, but following the second, Jalen Smith knocked down a deep three from the top of the key to make it a 5-point game. That was then followed by a three-pointer from Anthony Cowan to make it 25-17 with 3:22 to play.

Carton opened the second half with a layup, and after trading some baskets, Andre Wesson made it 31-29 with a layup with 18:15 to play.

Twice, Ohio State was able to cut the lead down to seven points, but could never put together consecutive possessions with baskets, even while holding Maryland without points for long stretches.

The Buckeyes had 17 offensive rebounds, but converted those into just 10 second-chance points. 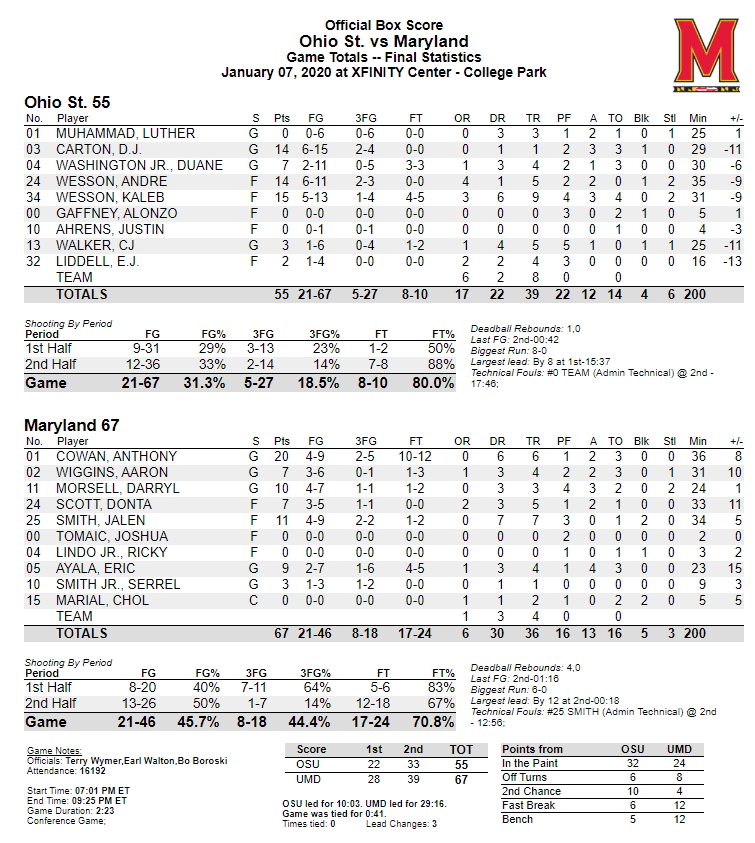