We did it, everyone! We beat Nebraska! <Anchorman jump dot gif>

I’m just going to convince myself that this is the mid-90s and that our local team pulled off a stunning 36-31 victory over the Cornhuskers! It sounds better than, “We did it! We beat a team that’s now 2-7 while continuing to make a lot of the same mistakes defensively that we’ve seen all season!”

Once again, it wasn’t pretty. Heck, it was a downright ugly game at times. In fact, it was apparently uglier to many than a 29-point loss at home to a rival. But, the Buckeyes came away with another victory, and that’s the name of the game.

Clad in their black unis, OSU did have some bright spots in their contest with Nebraska that should open some eyes and result in some more permanent changes. The run game, perhaps looking up Webster’s definition of “option” during the bye week, chose to go with more designed running back runs, often from a pistol formation.

Lo and behold, OSU’s talented running backs and big offensive line wore down the Husker front and ended up averaging almost eight yards per carry between Weber and Dobbins.

On the other side of the ball, injuries and ridiculous rule enforcements led to the Silver Bullets getting some fresh faces, namely Brendon White, onto the field. White, the local athlete, jumped into the safety role and only managed to tie for the team lead in tackles, matching Malik Harrison with a season-high 13 tackles. White was involved in seemingly every stop and must be heavily involved from this point on.

Here are a few areas that I did well in my week nine projections… and even more on which I was as close to nailing my prediction as Caleb Lightbourn was to nailing his surprise onside kick attempt.

The Spartans of Michigan State are an odd team this year. Their rush defense is tops in the nation. Only two teams (Penn State and Michigan) have managed to rush for over 63 yards on them. Their pass defense is good, though it allows a fair amount of yards. On defense, they are a picture of consistency. They stuff the run, limit the pass, and give their offense a chance to win.

On the offensive side of the ball, they’re consistently mediocre. Sparty hasn’t scored more than 24 points since October. In that time, their pass completion percentage has also dipped from 65.8% in the first four games, to 50% in the last five. They are a dangerous 6-3 team for the Buckeyes, especially in East Lansing, but one that we still don’t have a firm grasp on.

Ohio State should be able to move the ball through the air on MSU, but a balanced attack would be an ideal way to crush the Spartan’s will. We all know that Dwayne Haskins can throw the ball, but reminding Michigan State of what the Buckeyes were able to do to them on the ground last year (335 yards rushing, 8 ypc, 4 TDs) would go a long way in opening up the entire field and giving OSU a tremendous advantage in the contest.

Though we’d likely classify Haskins’ numbers this past week as an off game, I think posting similar numbers against a solid Spartan defense will be a success. Recent weeks have put the flow of the offense entirely on his shoulders, mostly the right one. The Buckeyes may finally get to use the passing attack in conjunction with the newly rediscovered run game, and not in spite of it.

The Michigan State secondary is fairly efficient, but still concedes more yardage than you’d expect from a Mark Dantonio defense. Scott and Layne, the Spartan cornerbacks, are both capable to lining up against and slowing down the OSU wide receivers. But, I think that the Buckeyes will use the middle of the field to their advantage in this one, picking on the linebackers and safeties with their experienced pass catching playmakers.

Haskins gets back up over 60% in his completion percantage and climbs just over the 300-yard mark in passing yards, putting him past Joe Germaine’s 3,330 and into the top spot in Buckeye history. In addition, he tosses another two touchdowns, inching him toward an inevitable school TD pass record against Maryland.

The big question mark in this game, and possibly THE deciding factor: can Ohio State run the ball against the Spartans?

Seems like a funny question, given the smacking that J.K. Dobbins and Mike Weber delivered to them last year. Now, we get to find out if that rushing performance was based on the fact that they also had to prepare for Barrett to keep the ball, or if the Buckeyes perhaps found something in the MSU scheme that they can again use to move the ball on the ground.

My bet, is that we find an answer somewhere in the middle. Be prepared for a somewhat slow and conservative start on Saturday. The Buckeyes will feel out the Spartan D, attempting to run on them and keeping the offense vanilla for the first quarter. After that, I expect Day, Wilson and Urban to begin exploiting mismatches in coverage, and for that to bring the linebackers back, thus opening up the run game. Ohio State will be the third team to rush for over 100 yards on Michigan State, with Dobbins and Weber both earning double-digit carries, and the younger being the more successful.

Johnnie Dixon, against Nebraska, threw a wrench into my little “K.J. Hill and Parris Campbell will top the receivers” trend. However, it was perfect timing for him to do so. A breakout game by a third receiving option just before the Buckeyes head to East Lansing to face a great defense is ideal.

The Buckeyes have now established that anyone lining up as a receiver is an immediate threat to take it for six. In order to spread the field and tire the MSU defense, that threat is a must. And, OSU must exploit it. They will use crossing routes, quick outs, and screens to never let the MSU secondary get comfortable.

Look for K.J. Hill to break free on one such crossing route, finding a gap in the coverage on a long catch and run into the endzone. Similarly, I think Terry McLaurin will get back into the scoring mix, finding himself the owner of a touchdown reception on a red zone slant from Haskins.

Lots of ifs in this week’s version of the defensive projections, but, hey, what’s new?

Brendon White was a very positive wrinkle in the Nebraska game plan, proving himself more than capable in both pass coverage and coming up in run support. I’ve made an assumption that he’ll get significant playing time in this one as well, marking him as the Buckeyes’ second leading tackler behind Malik Harrison on Saturday. I’m not sure exactly how the OSU coaches will choose to utilize White, but I’m basing my stats off of he and Fuller both being on the field for a majority of the game, with Shaun Wade seeing time at Nickel and rotating in at safety on occasion.

With MSU’s playcalling, it’s tough to tell exactly what we’ll see from them. I believe that the weather and recent issues in the passing game will have them running the ball a lot. This will boost tackling numbers for players like Pete Werner and Tuf Borland. However, if their run game stalls, and I believe it will, Lewerke will open it up and try to capitalize on a young Buckeye secondary.

Tuf, and not just because his last name is perfect (first isn’t bad either), forces a fumble. And, the local hero from last week, Brendon White, snags an INT. 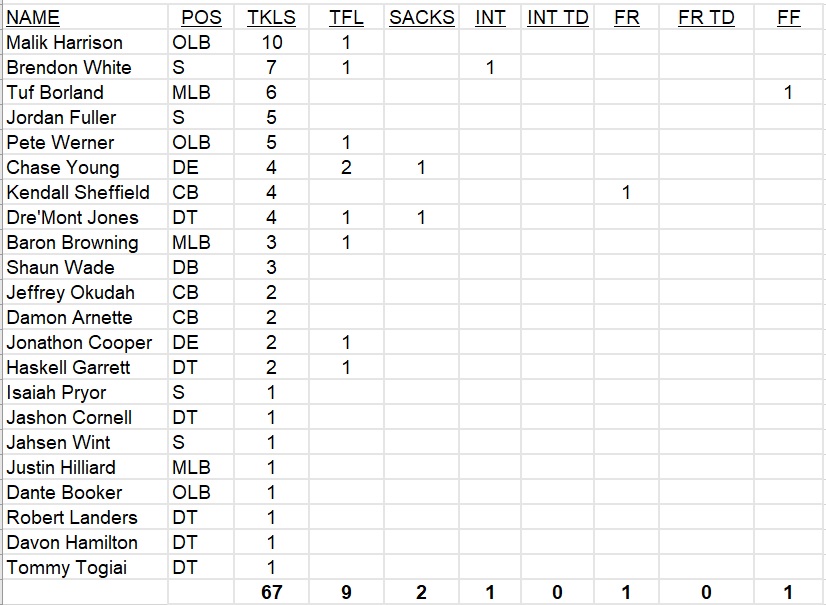 Haskins throws two touchdowns. The Buckeye backs each get into the endzone once. Blake Haubeil punches in a short FG after a red zone stop by MSU.

Michigan State hasn’t won when held to less than 21 points. Ohio State hasn’t lost when scoring 27 or more. That’s exactly where I have this game landing.

In the end, Ohio State does enough to shut down Michigan State’s offensive attack which eventually wears them down on defense too.