I normally start off each weekly post with a quick recap of the previous week. I’ll still give a brief list of where I was right and wrong with regards to my Purdue predictions. I will, however, opt out of the game summary. It may be Halloween, but I still don’t have the heart to scare you with a thorough recap of that mess. You saw what happened. We’ve all written about it in the weeks since. I won’t dwell any further on it, and I’ll use the bye week as my excuse for breaking my normal protocol. You’re welcome.

Here are the places that I did well in my week eight projections… and several more on which I was as close to nailing my prediction as the Buckeye defense was to tackling anything in a black jersey in West Lafayette.

Despite getting into the win column in their last two efforts, Nebraska is not a good football team yet. They have talent in several offensive positions, but they also give up a lot of yardage and points on defense. Adrian Martinez, their young and mobile quarterback, will likely cause the Buckeye linebackers some trouble. We’ve shown an inability to spy a mobile QB with a linebacker for much of the year, and Martinez is capable of making the defense pay. He’s averaging just under five yards a carry this year, but has two games of over 100 yards rushing.

Similarly, their running back could prove tough to bring down as well. Devine Ozigbo averaged an absurd nine yards per carry in the month of October, breaking the 100-yard mark in each of his last three games (159, 152, 110). In the passing game, J.D. Spielman, nephew of the great OSU linebacker, is a dangerous playmaker. He’s had plays of 40+ yards in half of their games this season and leads their pass catchers in receptions, touchdowns, and yards. He will surely test the unpredictable Buckeye secondary.

With all of the possible doom and gloom that I noted above, the Nebraska defense is just not at a point to push them over the hump in beating a top Big Ten contender… yet. Dwayne Haskins should have plenty of room to get the ball to his talented receivers. And, assuming the Buckeyes didn’t cut Weber and Dobbins during the bye week and wave goodbye to the run game entirely, the tailbacks should also be able to move the ball against the Huskers’ D. Ohio State will get back in the win column. It won’t always be pretty, as I’m not sure this team has “pretty” in them this season, but they’ll grind to another victory.

Dwayne Haskins, despite what Pro Football Focus will tell you about Alex Hornibrook, is the best quarterback that the Huskers (most teams, for that matter) will face all year. He’s incredibly accurate and can hit on any pass. To date, the Buckeyes haven’t gone downfield nearly as much as I thought they would have. Instead, they’ve opted to let their experienced receivers get open in space and put up YAC. I believe that will change on Saturday, as we see the men of scarlet and gray black beat Nebraska with the deep ball for at least one long passing score.

In addition to the deep ball TD, Haskins will throw two others to his wide receivers and one to a running back, likely Dobbins. The Heisman hopeful will end his day just shy of 400 yards, but mostly due to a coaching push to resuscitate the run game. He’ll complete over 30 passes, toss 4 TDs, and avoid any costly turnovers. In short, he’ll do exactly what is needed to get the Buckeye offense back on track, including finishing multiple red zone trips in the endzone.

With time to prepare and diagnose some issues, I believe that the Buckeye offense will force the run, even if it’s not always there. As he has for most of the year, Weber will outpace Dobbins in yards per carry. He’ll finish with more touches and yards, but still fall shy of the 100-yard mark.

Dobbins will also have a formidable day against the Husker rush defense, gaining over four yards per carry. He’ll also break loose on a reception and get into the endzone for his second receiving TD of the season. OSU rushes over 30 times and begins to (slowly) re-establish the run game that has been a staple of their offense for… well… ever.

As with each week in the Haskins Era, there is plenty to eat for the pass catchers in this contest. Parris Campbell will lead the pack, bursting free from coverage on the aforementioned deep ball. K.J. Hill will, again, be a huge factor in the passing game. He’ll gash the Nebraska secondary for nearly 100 yards himself, including another TD. Bin Victor will be the other WR to score in the game. His size will help him in catching a red zone fade above his isolated man defender.

Jaylen Harris will join the action this week, helping to fill in after the loss of Austin Mack. I have him getting one big catch, for 24 yards. The normal pair of Buckeye tight ends each grab a reception, joining McLaurin, Dixon, and Saunders on the stat sheet.

Perhaps it’s time to close the book on an interception return for a touchdown. I’ve predicted in a couple of times, but have not seen anything on the field yet to indicate that a non-defensive lineman is capable of doing so. To date, our d-line has scored 18 points (one on an INT) while our linebackers and secondary have failed to get on the board. I am boldly predicting that the Silver Bullets change that, albeit via a fumble recovery returned for six points by Malik Harrison.

I see Harrison pacing the tackling in this one, given the amount of QB and RB runs that we’ll see. But, the safeties will be right behind him, as Martinez and Head Coach Scott Frost, having obviously watched the Purdue game, will test the Bucks with the pass as well. OSU will pressure the young QB, getting three sacks, one of which results in the Harrison TD that was mentioned. 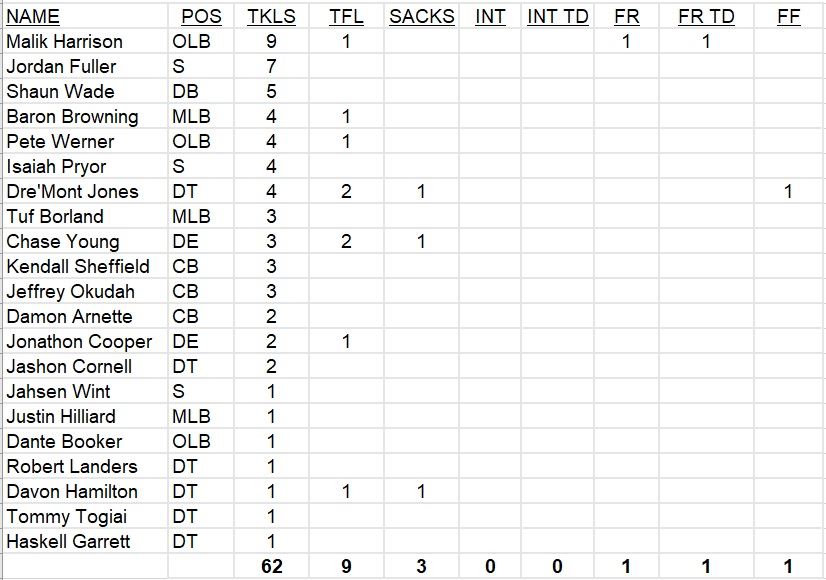 Haskins throws for four touchdowns, bringing his total just one shy of the school’s season record. Weber rushes for a TD, and Malik Harrison scoops and scores. Blake Haubeil, in again for the injured Nuernberger, blasts two field goals and hits all six PATs.