Before I get into the recap and statistical projections, go ahead and allow yourself a nice, calm exhale. Ohio State did what we’ve been waiting on them to do for several weeks. They played, perhaps, their most complete game of the season and beat a ranked opponent on the road. Sure, they toppled Penn State, in Happy Valley, by a close margin early in the year. But, if you recall, Trace McSorley is probably still running for yards against the Bucks’ defense… somehow.

This game felt different, especially on the defensive side of the ball. Ohio State held the pair of Michigan State quarterbacks to an abysmal 37.5% completion percentage. The Silver Bullets also squashed any thought of a Spartan run game, allowing just 54 yards on the ground. And 47 of those yards came on one QB run by Rocky Lombardi, who was apparently named by an original Nintendo creator based on how American football names should sound.

Whether or not this sudden defensive success was simply the result of playing against a terrible offense was discussed in depth by Tony and Tom in their Buckeye Weekly Podcast (if you’re not good at picking up sarcasm… maybe just check out the Ten Things We Learned in that game).

On offense, the Buckeyes weren’t exactly flashy and exciting, but did move the ball better than most teams against the tough MSU defense. OSU, specifically Mike Weber, was able to run the ball well, as the Buckeyes eventually wore down the front seven of Michigan State. They also benefitted from the remarkable field position that comes from having a trained punting assassin on your side. Drue Chrisman was able to pin the MSU offense inside of their own ten yard line a whopping five times in the contest, good enough for a second place finish in the conference’s Special Teams Player of the Week awards. <eye roll>

Here are a few areas that I nailed like a Drue Chrisman to Terry McLaurin downed punt in my week ten projections… and even more on which I shanked directly out of bounds and into the stands.

Maryland is a middle of the pack program, and has performed as such in 2018. They aren’t leading the conference, as far as I can tell, in anything of importance. Their pass coverage is respectable, but run D is so so. On offense, they can’t throw the ball, and currently sit last in the league in that category.

In short, Ohio State should head into College Park and come out with a decisive victory. Not specific enough for you on the game summary?

Not to worry. Here you are…

High of 50 degrees, very little wind… Dwayne Haskins will be wanting to throw the ball all over the place in this one. But, I think that the OSU coaching staff still has a few things to prove in the run game, and will do their best to “limit” the passing game and maintain a balanced offense. Maryland has a competent secondary, but the Buckeye pass catchers will find gaps in their coverage and make a couple of big plays, including a deep ball TD. The OSU QB, and former Maryland commitment, throws for three touchdowns, breaking the school single-season record. In addition, he goes well beyond Joe Germaine’s passing yard record (3,330 yards) in this contest, breaking it in the first quarter of action.

Tate Martell makes another appearance in this game, as the offensive minds want to throw a few wrinkles into Saturday’s game to give the imposing Michigan defense a few things to think about. Martell will run the ball, but will also attempt a couple of passes, making sure to keep the defense guessing. I think Tate gets into the end zone on one of his rushing attempts, proving that he’s an effective red zone option for the Buckeye offense.

The Buckeyes wore down the Spartan defense last week, and face a much less daunting front on Saturday. Maryland may have success in stopping the run early, but I believe that the Buckeyes, now confident from their win in East Lansing, will run with passion. It’s always difficult to guess which OSU RB will garner the most carries and find rushing success, but I’m going with Dobbins. He carved up the Terrapin defense last year and will pick up where he left off. Dobbins will break 100 yards and earn a score in this matchup.

Weber will not be a slouch, earning 15 carries and rushing for just under 70 yards himself. On top of that, I think OSU will get a carry to Demario McCall, reminding the Wolverine coaching staff that there are many options for which to prepare.

Johnnie Dixon redeems his drops in this game, breaking free from his defender and scoring on a deep ball from Haskins. Campbell finds pay dirt on another quick pass, as he’s done so many times before. And, the youngster, Chris Olave, also gets into the paint in this game on a red zone pass. K.J. Hill will lead the team in receptions, this time finding more room to run than he did against Michigan State.

Maryland can, and has, limited the pass, but will not be able to do so against the Buckeyes’ experienced wide receiving corps. Ten different players will catch passes, and the amount of weapons will simply be too much for the Terps to control.

Maryland’s mobile QB, Tyrrell Pigrome (assuming the starting role with Kasim Hill now out for the season), will find some running room on Saturday. But, the OSU linebackers, now supported by a sure-tackling safety in White, will be there to slow that facet of the Maryland offense. With that said, the Terps have some big play backs and will do their best to pound the run and break through for big gains against the Bucks. Look for Anthony McFarland to have a couple of 15+ yard gains, and potentially break free for a score.

OSU’s secondary will need to stay focused on their assignments in coverage and not get sucked into the run game. Maryland has had an awful passing attack, but a safety with his eyes in the backfield and not on a receiver is always an easy target. Taivon Jacobs, a former Buckeye commit and barbecue aficianado (<–Gus Johnson joke, see above photo) leads the team in receptions and yards but will be kept in check on Saturday. Pete Werner breaks free on a blitz and gets a strip sack. And, what the heck, might as well have Dre’Mont Jones find the ball, since he always seems to be there ready to pounce. 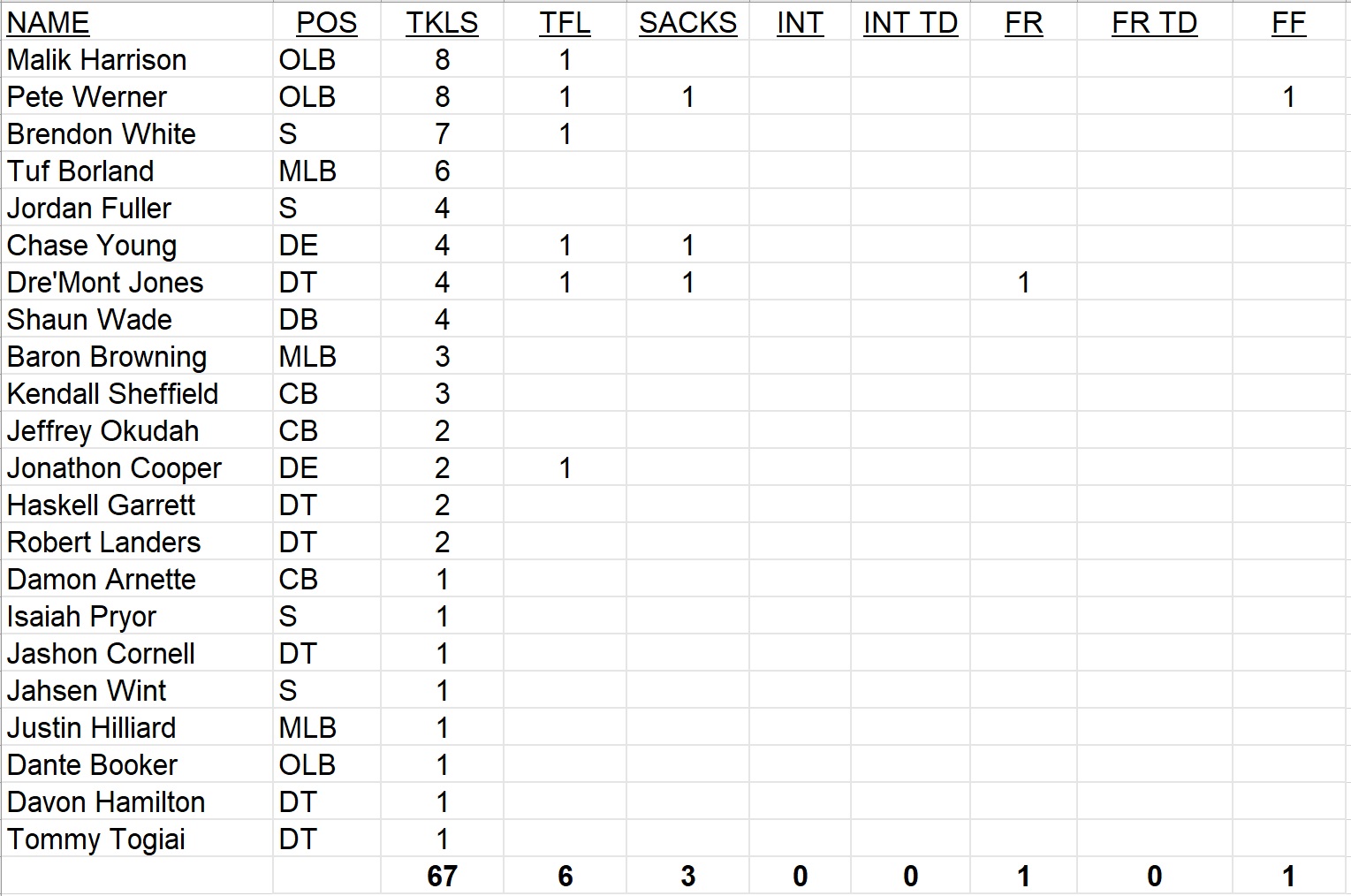 Haskins throws three touchdowns (to Dixon, Campbell and Olave), Dobbins and Martell get rushing scores, and a Buckeye kicker (updated: given the news that Nuernberger is now “on call,” whatever that might mean) knocks home two field goals and all of the necessary PATs.

Ohio State, riding the momentum from last week’s win, goes into College Park and crushes the Terrapins, building up for a huge showdown in Columbus against “That Team Up North.”