Holy moly, Ohio State! Though my offensive statistical projections for the Buckeyes were pretty close last week, I wasn’t ready for the defense to continue crushing souls quite like they did. I hadn’t been impressed with the Huskers’ defense, so I figured that a Ryan Day offense would cut through it like butter. But the Silver Bullets truly turned heads last weekend.

With regards to projection specifics, I was right on with Justin Fields’ completion percentage, though he didn’t need to toss the ball as much as I thought he would. For that reason, he also didn’t hit the passing yardage I’d proposed. He threw for three TDs and rushed for another, as projected. He somehow avoided his first INT (still!), which is remarkable.

For the running backs, I had J.K. Dobbins pegged for 24 carries and 164 yards. Amazingly, he complied with the carry total exactly, but managed an additional 13 yards. Master Teague III stole the rushing TDs and reception that I’d given to Dobbins. As for the third-string carries, Marcus Crowley managed to get those instead of Demario McCall.

Receiving predictions? We can skip those. I got Austin Mack’s receptions right, along with K.J. Hill’s touchdown catch. Aside from that, I had a forgettable stretch of guesses in that category.

Blake Haubeil knocked in all six extra points, as noted, but added a second field goal to my projected total. As for Drue Chrisman, I had him punting four times and he only had to put one ball into the air. Always a good thing, so no complaints there, despite being pretty wrong. 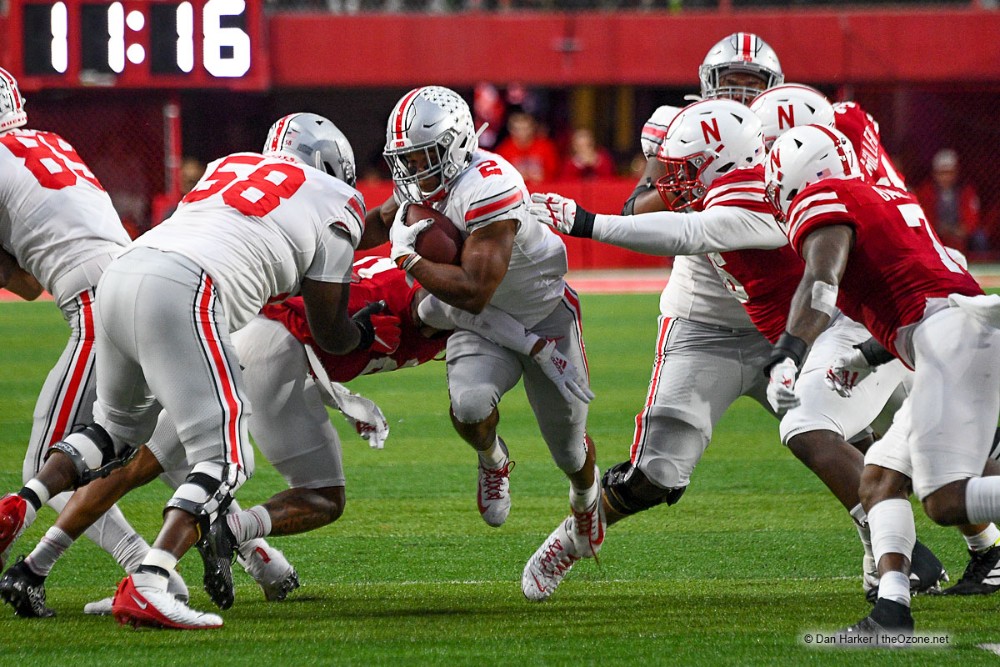 Ah, heck. Why even temper expectations at this point? Go get em, Justin. The new QB has more TD passes this year than Northwestern, Rutgers and Michigan’s offenses combined, and I still don’t think we’ve seen what he’s entirely capable of.

I think Ryan Day cuts Fields loose a bit in this night game showdown and lets him throw about ten more passes than usual. Fields will set season highs in attempts, completions, and passing yards on Saturday night in Columbus. He throws another three TD passes, again failing to record an INT, and rushes for another score, because that’s his thing.

Chris Chugunov gets into the game in the fourth quarter, completes a couple of tosses, and closes out another dominant OSU victory.

The Buckeye run game continues to thrive, even against a tough Spartan front. Dobbins and company don’t get quite as much work as usual, since OSU puts the ball in the air a bit more. However, the O-line still commands the line of scrimmage and allows each of OSU’s three backs that touch the ball to average over four yards per carry.

J.K. Dobbins will score twice in this game before Master Teague III and Marcus Crowley jump in to relieve the veteran ball carrier. J.K. gets the only two RB receptions in the contest, moving the ball for another 17 yards and putting him over the century mark in yardage on the night.

K.J. Hill is a back-breaker in this matchup with Sparty. Fields finds him frequently, as he racks up eight catches and 73 yards, consistently finding gaps in coverage. Jeremy Ruckert and Luke Farrell both snag catches (one of which goes for a TD), proving once more that our tight ends have not been forgotten.

Chris Olave makes a couple of big gains, including one for 20+ and six points. Mack and Wilson move the chains throughout the game, but it’s Binjimen Victor making the most dramatic splash. Victor breaks loose deep down the sideline early in the game and hauls in a huge TD catch.

Blake Haubeil, just like last week, connects on each of his six PATs and also knocks in another field goal and Drue Chrisman is only needed thrice.

The Buckeyes in black roll through the Spartans on Saturday night and cruise into their first bye week undefeated.