I know I’m not alone in my frustrations from the game against Indiana. Sure, it’s become Urban Meyer’s norm against the Hoosiers, to drag them along for 45 minutes of game action before putting them to bed in the last quarter of the matchup. And yet, it never seems to get comfortable. We knew it was likely to happen, but was still painful to watch at times.

On the plus side, our quarterback, though two passes were intercepted (due to contact during the throw), managed to throw for three yards short of a school record (455 yards). Within that performance, he also tossed six TDs and completed 75% of his attempts. Concerning, at least for me, was the fact that our rushing attack has not yet matched my own high expectations, and our defense is still giving up big plays to our opposition on a very regular basis.

All that grumpiness aside, as I’m not trying to impede on Mr. Citro’s territory, the Buckeyes are now 6-0 and in great position to accomplish their big-picture goals. Indiana challenged them, but still wound up 23 points shy.

As with each week, here are the (very) few places that I did well in my week six projections… and several more on which I missed pretty badly.

The Buckeyes were unable to overcome a case of the Hoosiers last weekend. Sure, the good guys topped them by 23, but, as usual, it was an ugly affair.

The same will not happen this weekend. OSU comes out strong, dominates on both sides of the ball, and does not allow any boats to be successfully rowed. P.J. Fleck will pull out all of the stops to overtake the heavy Buckeye favorites, but the talent level discrepancy between the teams will be evident. 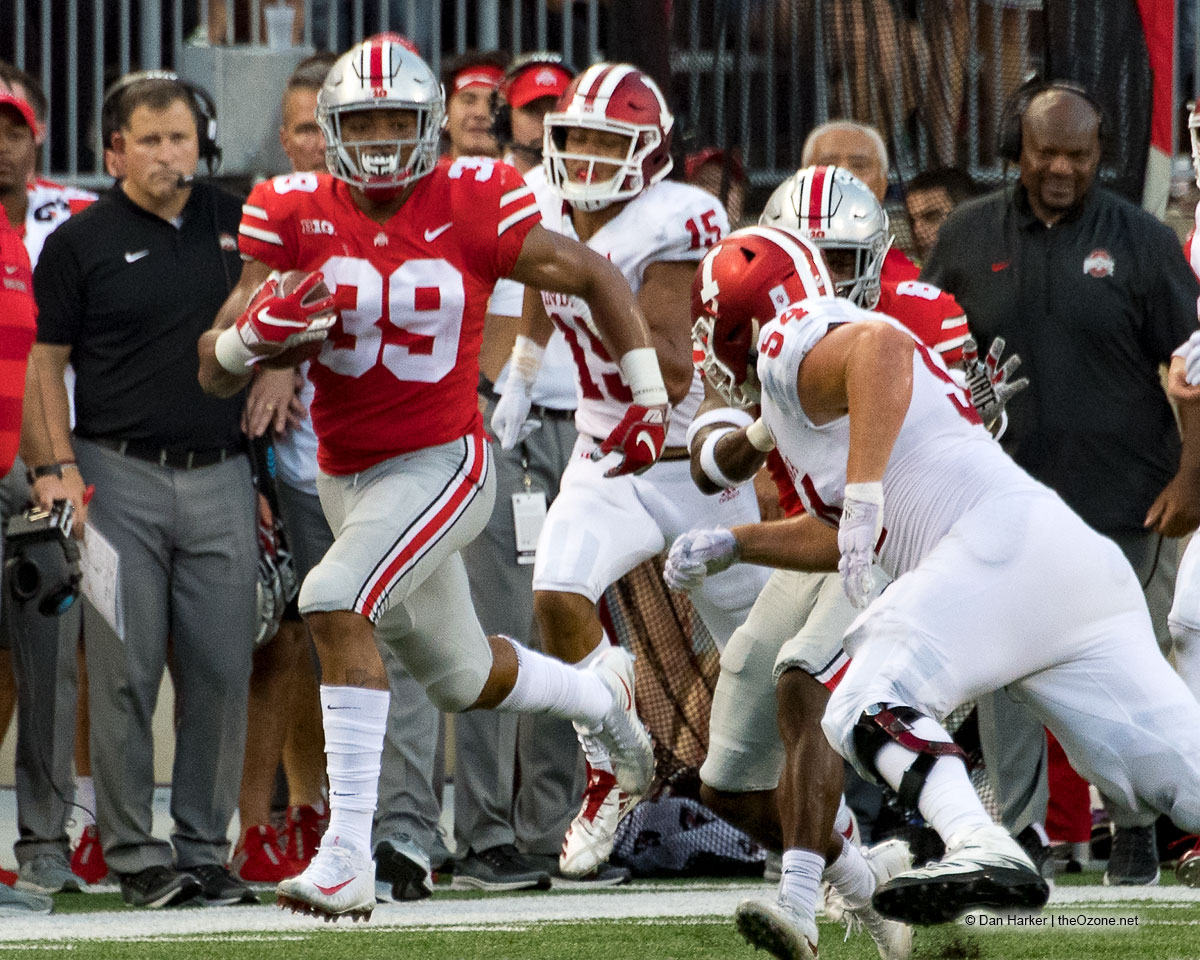 Ohio State cruises to a victory in this contest, not giving the Golden Gophers any hope for a comeback and keeping a foot on the gas pedal for the majority of the game.

Tate Martell might play. Heck, he may have specific packages put into the offense just to get him onto the field. I, however, have projected stats for him in each of the last two games that did not happen. So, until I see otherwise, I’m running with the lone QB in this matchup.

I see Dwayne Haskins, again, throwing the ball around thirty times, completing 75% of those, and surpassing the 300-yard mark yet again. This will be the first instance that we’ve seen this year in which one of his throws is neither tipped, nor his motion hit by a defensive player, but actually flies into the hands of the opposition. With that said, I think it’ll simply be a slight overthrow on a downfield pass that gets away from him and leads to a Minnesota INT.

That will be his only major blemish, as he continues to roll toward Heisman contention. He’ll tally at least three more passing scores, bringing him within striking distance of the school’s single-season mark of 35.

In an effort to reestablish the powerful, dominant run game, Urban and company call on Dobbins and Weber frequently in this one. Though neither has a career day, they both offer efficient numbers and move the chains (and the clock) in a way that frustrates the strong Golden Gopher defense.

Dobbins continues to lead the duo, getting more carries and more yards. Weber, on the other hand, keeps his lead in the ypc category, averaging over five yards per touch. J.K. will add two catches on the day, bringing his catch total into the double-digit range. The tandem also rack up some scores in this contest, scoring a combined three TDs, with the younger back getting two. No other running back touches the ball in this one, despite the lopsided final score.

As he’s done in several game weeks, Parris Campbell will lead the team in receiving yardage. I think he’ll near the 100-yard mark for the day on several big gains. K.J. Hill and Austin Mack tie Campbell for catches, with each receiver hauling in five on the day. With Minnesota’s good defense, the Buckeyes don’t attempt too many downfield balls. Instead, they’ll opt for the intermediate crossing and short out routes to break the backs of the D. Every one of the WRs mentioned gets a chance to celebrate in the endzone, as they catch Haskins’ three TD passes.

Outside of that, this is a rare day in which the rest of the Zone 6ers take a backseat with regards to receptions. Their blocking sets the tone in a physical game and enables Hill, Campbell and Mack to get some yac, but McLaurin, Dixon, Victor and Berry all combine for less than ten catches on the day.

Minnesota’s freshman quarterback, Zack Annexstad, made headlines for going from walk-on to starter in a single offseason. The talented player has performed well for the Golden Gophers. However, he has had growing pains in his adjustments from elite high school ball to Big Ten football.

Annexstad attempts roughly 30 passes a game, completing just over half. I’d anticipate that P.J. Fleck, Minnesota’s young, energetic coach, will come out with a solid gameplan in the first quarter. He’ll attempt to find gaps in OSU’s porous secondary, while using Mohamed Ibrahim in the run game to keep the Buckeyes honest up front.

All of that, if done correctly and efficiently could make for a close game. It won’t be done correctly. Annexstad simply makes too many mistakes (he’s thrown five interceptions in the last two outings). In addition, the offensive line is giving up almost three sacks per game to far less talented defensive fronts than the Buckeyes. It’s these factors that leads me to believe that the Buckeye defense will make some big plays on Saturday.

Malik Harrison has a breakout game, coming up with a team-leading seven tackles, a sack, and an INT return for a touchdown. Chase Young wreaks havoc in the backfield, and several other linebackers also get stops behind the line of scrimmage. The secondary gives up some plays, and Minnesota scores a couple of times. But, it’s nowhere near enough to stay competitive in this matchup. 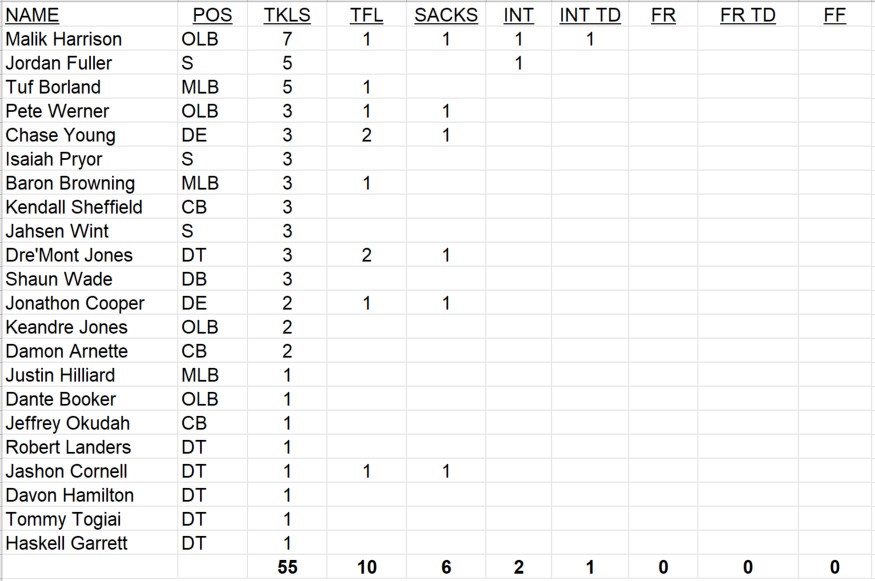 Weber and Dobbins combine for three scores on the ground. Hill, Campbell and Mack add another three through the air. Malik Harrison puts up points from the other side of the ball, returning an INT to the house. Seven touchdowns equals seven extra points for Mr. Automatic… and a field goal tops it off at 10 points for Das Boot.