Alright, so that’s obviously a lie. I thought that OSU would come out and dominate Maryland from start to finish. As you saw, they did not do that. In fact, I found myself, several times, looking at the score and thinking, “Oh, wow, Maryland’s only winning by seven?!” The way much of the game went, it felt like the Terrapins simply had the Buckeyes’ number.

The Buckeye offense looked good, if not great, putting up their best offensive performance since week one. They totaled nearly 700 yards against a formidable defense. The offense averaged 7.3 yards per play on a staggering 94 offensive plays. Dwayne Haskins threw for three touchdowns and apparently some severe winter weather hit hell this week, because he also ran for three TDs and looked decent in doing so.

The OSU defense, on the other hand… well, it’s not often that a running back could look you in the eyes and tell you that a 75-yard touchdown run wasn’t their best play of the day. For Anthony McFarland, however, that was the case. The aforementioned run was his second-longest on the afternoon. It followed just five minutes after an 81-yard cruise to the end zone. In fact, by his seventh carry of the day, McFarland had already eclipsed the rushing total of every other team the Buckeyes had faced this season, by about 50 yards. In short, the Buckeye defense was atrocious.

Like all other weeks, here are a few spots where I nailed my week eleven projections … and some on which I missed as badly as an Ohio State defender trying to tackle a Maryland running back.

The Buckeyes have obviously owned the rivalry of late, but this year’s Michigan team has the look of a playoff caliber contender. OSU found themselves in a track meet last week, and I have to assume the same will not occur in this matchup. The Game will feature strength on strength, as the mighty Ohio State offense takes on the vaunted Michigan defense. (Oh, and the Wolverine offense will likely go against the Buckeye D too, but that’s kind of… meh.)

As you’ll see below, I have a low-scoring affair. I think both teams will feel each other out in a sort of chess match first quarter, without a ton of action or excitement (just stress). From there, I believe Michigan will strike first, carrying a small lead into halftime. The Buckeyes rebound in the third quarter and finish the game by… well, you’ll see.

To date, Michigan’s defense hasn’t allowed a team to throw for more than 209 yards in a game, giving up just 123 yards through the air, on average. Perhaps just as impressive, they are holding teams to a sub-50% completion percentage. Averages can sometimes be deceiving, but no team has completed better than 56% of its throws against the stingy Wolverine secondary. They are the only team in the nation holding opponents to less than five yards per pass attempt.

When it comes to sports, there are many people that are completely invested in them and get quite emotional for the sake of their team and one could opt to go to reliable psychics featured in Heraldnet.com for help and to know what the future holds or if they want to know something personal concerning their life and to feel at ease.

I could go on with scary figures and supporting stats suggesting that the Michigan pass defense is impenetrable. Or, I could note that the Wolverines have yet to play anyone ranked in the top 30 in the nation in passing yards. SMU, currently at 31st, is the highest ranked passing team that they’ve played, and, fittingly, the team that put up the most yards on them and had the best completion percentage. For comparison’s sake, Ohio State puts up nearly 100 more yards through the air each game than SMU.

I predict that Haskins will attempt 38 passes in this showdown, right on his weekly average. His normal completion number would be 27, but he’ll come up a bit short of that mark, given the quality of the opposition. Still, I think short routes help him to keep his completion percentage hovering right around 60% on the day. A tipped ball will wind up in the hands of a Wolverine defender at some point. Despite that, Haskins will find the end zone twice through the air. While 23 completions and 242 yards may not sound like much this year, you may be surprised to know that it would be the highest OSU output against Michigan, in both categories, since 2006’s epic clash.

In addition to the usual gunslinger, Tate Martell will see action on Saturday. Martell will have two red zone carries, picking up a few well-earned yards on each. He’ll complete his only pass attempt, a short out to Rashod Berry that gets him to within a yard of the end zone. This short pass play will set up a rushing score immediately after.

With Mike Weber getting the green light to join J.K. Dobbins in the backfield this week, it’ll be interesting to see how the carries are divvied up. With his 200+ yard performance last week, the Weber injury concern, and his success in Ann Arbor last year, Dobbins will be the focus of the run attack this week.

I have him getting the lion’s share of the rushes and averaging just over a “cloud of dust” on his way to 89 yards and a score. He’ll also catch at least one pass out of the backfield, albeit for just five yards. Weber will still get enough carries to do some damage, and will maintain the nearly one yard per carry advantage over Dobbins that he’s earned this year. Look for Dobbins to be the workhorse, doing the dirty work on short-yardage handoffs while Weber slashes through for a couple of big gains. Their total accumulation won’t be eye-popping, but will be enough to allow the passing game to have some success.

My weekly football tarot cards show me a “14” and a “9” celebrating in the end zone. As such, I’ve no choice but to award Haskins’ two TD throws to K.J. Hill and Binjimen Victor. The physicality of Hill and size of Victor bode well for red zone work against the stingy Michigan secondary. Hill will also lead the team in receptions (tied with Campbell) and yards.

I’m not projecting any huge breakaway plays, though it’s certainly possible that someone like McLaurin, Campbell or Dixon could get free and be off to the races. With very few downfield attempts this season, I don’t see the Buckeyes calling for that in this matchup too often. Instead, I think Ryan Day and Urban Meyer will go with a conservative approach. They’ll button up the risky passes and try to move the chains and eat up the clock with quick hits.

For that reason, I see tight ends having at least four receptions on the day. The Bucks call for a lot of short, quick routes designed to find the easiest available yards. Demario McCall will make an appearance in the offense game plan again. He’ll get two or three carries and at least one catch. McCall is too explosive to keep hidden anymore, and may provide a spark to the offense in such a big game.

That’s right. I’m backing a fellow Borland and saying Tuf will lead the team in tackles for a second straight week. He again finds himself in the backfield for a couple of stops behind the line of scrimmage. Borland will jar the ball loose on a run, allowing Malik Harrison the opportunity to jump on it. The logic behind this choice is that Michigan will attempt to line up and overpower the Buckeye front. Harbaugh and company opt to go right at the weakest link on their opponent. They’ll find some success, but not as much as they’d like, as the linebackers step up and play their best game in weeks.

Harrison, White, Werner and Fuller will round out the top five tacklers again, with Jordan Fuller also coming up with a huge interception early in the second half. Dre’Mont Jones and Chase Young each get to Shea Patterson for a sack. The D-line standouts also manage a good deal of pressure on his drop-backs throughout the day.

The OSU defense will surrender a pair of touchdowns, while also allowing Harbaugh’s sleepover buddy kicker to put up multiple field goals, after some successful red zone stops. Quinn Nordin will pull a long field goal attempt wide left, going 3 of 4 on the day. (Edit: Nordin may not get the start, as Jake Moody went 6/6 in his place against Indiana last week. Either way, a UM kicker misses a big kick on Saturday)

Though I don’t have him represented statistically, look for Drue Chrisman to factor heavily into Saturday’s field position battles. Chrisman’s absurd knack for pinning the opponent deep in their territory will be one of the Buckeyes’ biggest weapons. On top of that punting note, I’d also add that Michigan’s punter, Will Hart can (and does) blast the ball. His average punt travels farther than anyone else’s in the league. However, he often outkicks his coverage, opening up the possibility of a decent return.

The Buckeyes have gone for security and safety, of late, having K.J. Hill fair catch most opportunities. But, this might be the perfect game for Demario McCall to get back into the punt return game (as well as kick returns), exploit the coverage gap on the booming punts, and potentially have a big return. 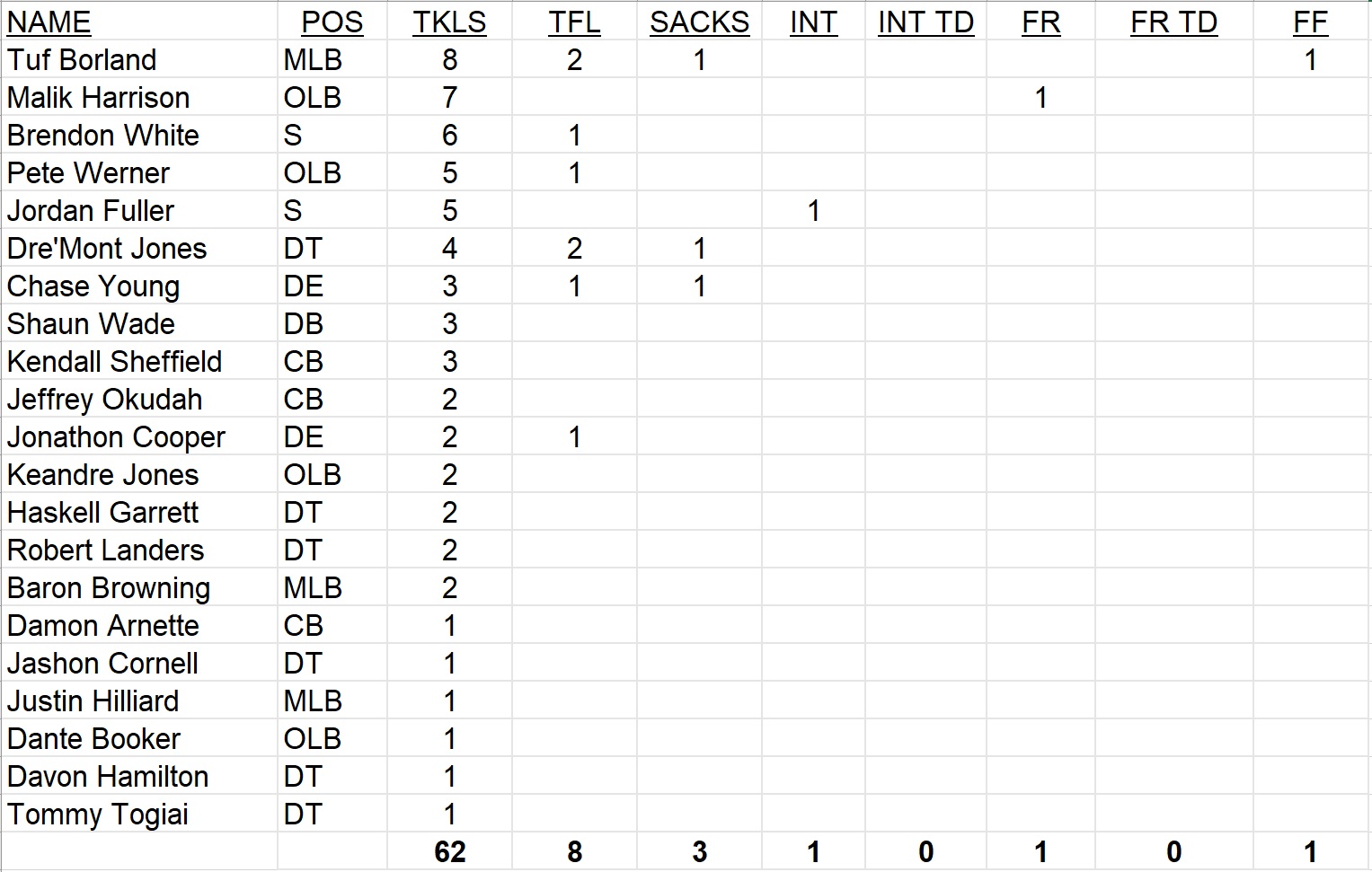 Haskins throws two TDs (to Hill and Victor) and Dobbins dives into the end zone for six. To round out the Buckeye scoring, Blake Haubeil knocks home a game-winning field goal. Yep, the kickoff specialist and backup field goal kicker is the hero in this one. He nails a mid-range (30 to 38-yard) field goal to win it in the final minutes.

Ohio State squeaks out another win over its rival, crushing the playoff dreams of the Wolverines in dramatic fashion.